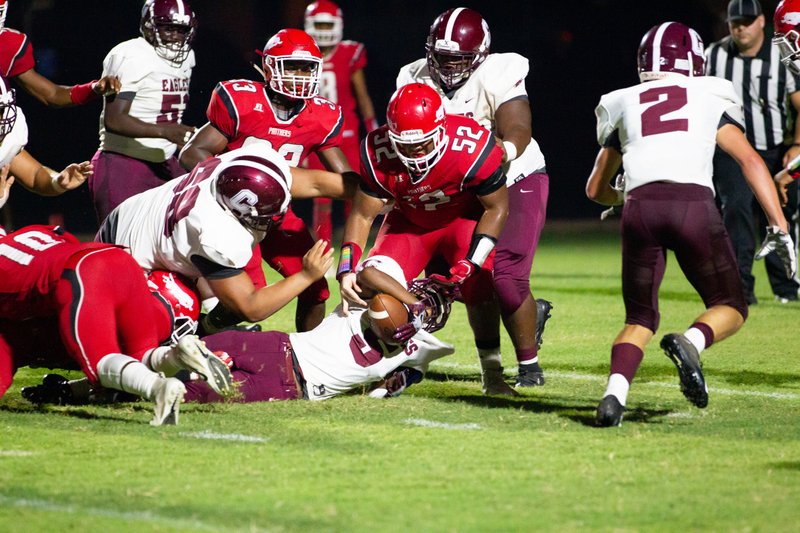 Magnolia junior lineman Jakameron Zachery (52) make sure Crossett’s Jaylon Lawson is down. The Panthers rallied in the fourth quarter to beat the Eagles 36-30 last week. - Photo by Mike Jones

Another huge and vocal crowd is expected tonight at Panther Stadium when another Class 4A-8 Conference team visits Magnolia for the third consecutive week.

The Panthers (1-1) first fell to Warren 41-21 in the season-opener at SAU’s Wilkins Stadium, but got a miraculous 36-30 win over Crossett last week. Tonight, at 7 o’clock, the Monticello Billies will ride onto Don Hubbard Field.

Though the Billies (0-1) are picked to finish last in their conference, the Panthers will have to eliminate mistakes to come away with their second victory of the season.

“Against Crossett, I told the kids at half-time that we played as bad as we could play. Nothing went right and I think we gave them three out of four touchdowns in that first half,” said Magnolia head coach Mark King. “I told them if we come out the second half, clean things up and play good, we would win the game. Low and behold, we turn the ball over in the red zone during our first two drives of the third quarter.”

According to King, the Panthers never quit and continued to give the effort. They scored 22 points in the final quarter for come-back victory.

Magnolia has shown it can move the football and score with its flexbone offense. It has several time-consuming scoring drives, but others have been wiped out because of penalties or fumbles. In two games, the Panthers are averaging 27.1 points per contest but the defense is allowing an average of 35.1points.

After tonight, the Panthers will be open next Friday before starting 5A-South Conference play at Arkansas High in Texarkana.

With several athletes playing both offense and defense, King said the Panthers are adjusting.

For example, he said senior quarterback Braelyn Beasley goes both ways and plays on special teams.

“He touches the ball a lot. Last week, I think he got to rest on one defensive series. But that’s true with a lot of our guys. Last week was another hot and muggy night, but I thought as as a team we handled it a lot better than the previous week,” said King.