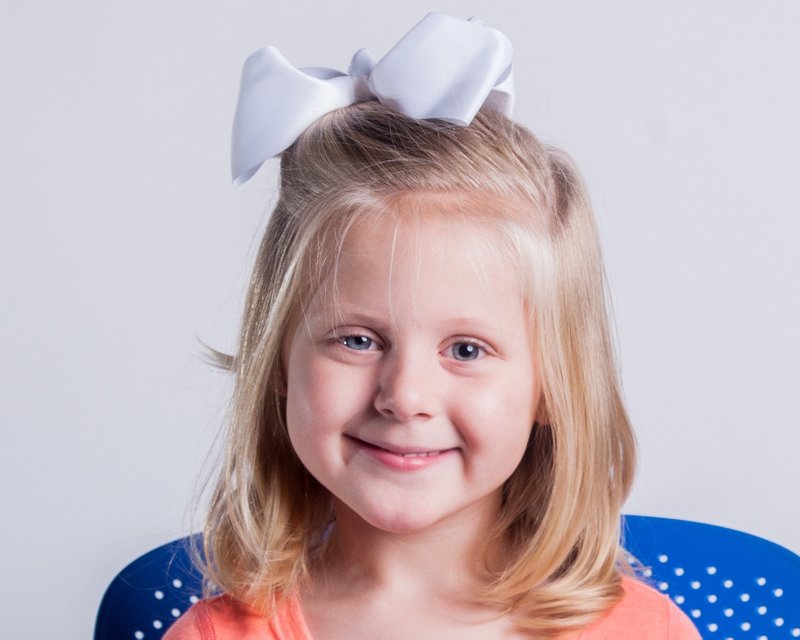 Kaylynn Sands of Magnolia was diagnosed with a cancer at age 2. Her family sought out care at Arkansas Children’s Hospital. Today, the 5-year-old is on her way to recovery. - Photo by Arkansas Children's Hospital

When the fifth doctor in five months to examine 2-year-old Kaylynn Sands told her parents, Anne Marie and John Sands, that the knot on the side of their daughter’s neck was “probably” nothing to be concerned about and that he would just leave it alone, no one would have blamed them for adopting the adage “no news is good news” and letting the matter drop there. But the Sands weren’t satisfied with “probably.”

“There were constant appointments and no real answers,” said Anne Marie, recalling her frustration. “When we left each visit, we don’t know what was the next step.”

Their pediatrician encouraged them to get one more opinion, this time from Arkansas Children’s Hospital ENT specialist Dr. Gresham Richter. Anne Marie recalls her gratitude at finding someone who was as determined as she was to get answers.

“As soon as he walked in and saw her, he put together a plan of action, with surgery scheduled for the following week,” she remembers. After months of doctors saying “we don’t know,” it was such a relief to find someone who was being proactive.

“There was no clear guidance until we saw Dr. Richter,” said Anne Marie. “He was so confident, and so clear in his decision, it put us at ease.”

In surgery, it was discovered that the mass was wrapped around critical nerves and blood vessels. A biopsy revealed it was a form of cancer—ganglioneuroblastoma.

Kaylynn started a plan of treatment with oncologist, Dr. Amir Mian, and when scans after several months of chemo showed no shrinkage of the tumor, the family was referred to Children’s Hospital of Philadelphia, where it was finally removed. But the Sands family Dr. Richter and Arkansas Children’s with launching Kaylynn on the road to recovery.

“Dr. Richter has a special place in our hearts,” said Anne Marie. “We trust him completely.”

Anne Marie says she always knew ACH was a special place. She even helped fund raise for it with her sorority.

“I always had a good feeling about it,” she said. “But there was no way I could understand how awesome it is until my own child was there. “

One special memory of their time there was when a nurse read a funny book from memory to Kaylynn to keep her distracted during a painful procedure.

“She went above and beyond,” said Anne Marie. “The entire staff was always friendly and welcoming and took care of us. We felt at home there.”

Kaylynn is on the downhill slope of her journey, Anne Marie reports, but the family still makes follow-up visits to ACH every couple of months, from their home in Magnolia. The experience has been formative for the now 5-year-old, whom her mother describes as “sassy.”

“We talk a lot about service and helping others because so many people helped us,” she said. “We do fundraising and volunteer work together, and she comes to every meeting and every event. Her journey with the illness may be coming to a close but her journey with the experience will last a lifetime. She shines her light everywhere she goes.”

Arkansas Children’s treats 90% of pediatric cancer cases in the state with approximately 100 new pediatric cancer diagnoses each year. For more information or to make a gift, visit www.giving.archildrens.org or call 888-880-7491.