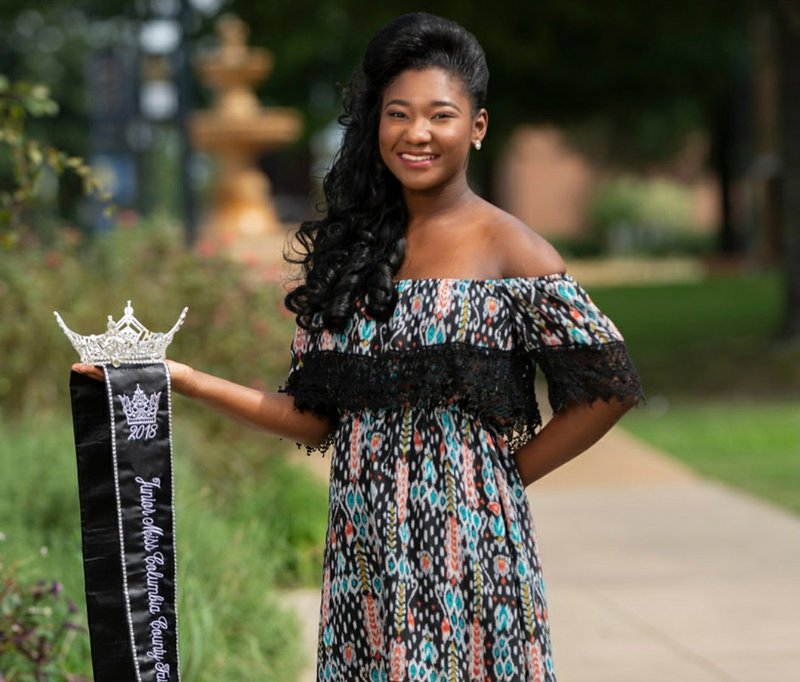 Morgan Holly with her Jr. Miss Columbia County Fair Queen crown and sash. The 16-year-old from Magnolia won the pageant in 2018. - Photo by Contributed

Morgan Holly says she’s a confident 16-year-old, who wants to influence youth and raise awareness to causes that are near to her heart. One of those causes is SWAGG – Self Worth And Greater Goals, which she has adopted as a platform for an upcoming national pageant.

“I have learned that you have to be important to yourself first, then others will see how important you are. Setting goals and strengthening your self-worth are just a couple of factors in becoming a better person,” said last year’s Columbia County Jr. Fair Queen, who will relinquish her crown this year.

“This organization (American Beauties Pageant) will give me the opportunity to further spread my message, as well as help others achieve their full potential,” said Holly.

The teen-ager said she is someone who had been diagnosed with ADHD (attention deficit/hyperactivity disorder), which makes it difficult for a person to pay attention and control impulsive behaviors. ADHD is not just a childhood disorder, but can continue through adolescence and adulthood.

“With this national platform, I will be able to reach my generation and offer things they might not discuss with others. This national crown would be the ice-breaker that some young girl or boy might need to allow them to talk about their self-worth,” explained Holly.

“I’m driven because I set goals for myself and work hard to achieve them. Caring, because I will always do my best to help others and make sure they are okay. Sociably, because I am a friendly person who truly values pure human interaction,” explained the beauty queen.

Holly is very active in school, church and her community. Outside of winning the 2018 Columbia County Fair Queen crown, she has volunteered with several charities such as the women and children’s shelter. She was also 2019 Teen Miss Blossom Festival, as well as the 2018 Miss Bossier City Kappa League and 2018 Teen Miss Jingle Bell.

She maintains a 3.8 grade point average, held lead role in a school play, member of FBLA and was awarded an excellent rating on the ACT interim test as a 10th grader. She’s been enrolled in pre-AP classes since the eighth grade and is a member of the Southern Arkansas University Upward Bound program. Holly said she converted to vegetarianism nearly two years ago and it has made a world of difference in her health.

“I want to make a difference in my community by helping those who struggle with self-esteem and other issues. I want to be an animal-assisted therapist when I grow up, but helping others who also struggle with ADHD is my passion,” she said.

Holly said she’s super excited about being in the national pageant against at least seven other contestants from states such as Georgia, Tennessee, Texas and Missouri.

“This is really a new experience for me and I’m happy God has given it to me. I can’t wait to be a part of it,” said Holly.

Her mother, Marcee Holly-Ross, said they are still raising money for the trip and have already covered many expenses.

“We’ve had bake sales, yard sales and other things which have done pretty well. With the help of the state organization, we pretty much have her room and board covered now. But there are some other expenses, not including our travel there, we still have to meet,” said Marcee.

She considered setting up a gofundme page to help raise the other funds, but “I haven’t done it because I don’t know how I completely feel about doing something like that.” She said anyone, regardless of amount, wanting to contribute to Morgan’s effort, can call her at 904-0706.

Marcee said the plans are when she gets off work Tuesday, Oct. 1, they will head to Atlanta by car. A meet-and-greet and other activities are set for Wednesday, Oct. 2. The contestants, wearing their state crowns, will tour the Coca-Cola factory and go on other field trips prior to actual pageant on Saturday.

Though there will only be seven contestants seeking the teen national title, the mother and daughter duo said there will be “several” contestants vying for crowns in different divisions.

“There will be categories such as Miss, Mrs, and others. There will be ladies competing from age 14 up to 60 or 70. There’s a division for my age group if I was contestants,” Marcee said with a smile.

If Morgan is crowned the 2019 American Beauties National Pageant teen winner, she has to be available for pictures and other post-pageant events that Sunday morning before heading back to Magnolia.

During the pageant, Morgan said there are some optional categories a contestant can choose from to be judged on, but five areas will be graded by judges.

The teen said she opted not to do talent, but added she’s learning how to play the ukulele.

“We have one ordered and we will just see how that goes,” said mom.

Morgan said again said she’s grateful for the opportunity, thanking her Magnolia community and everyone on the state level for her getting this experience.