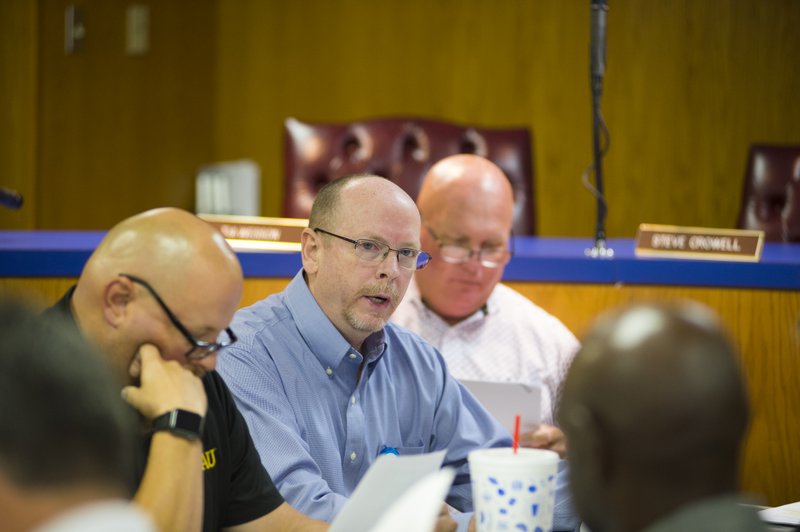 Two sides with what initially seemed to be opposing viewpoints came together this week to discuss the new board structure and nonprofit status for Magnolia Regional Medical Center.

The topic of the hospital breaking away from the city government and establishing a new, separate nonprofit corporation was first presented to the Magnolia City Council in May. The move is projected to raise MRMC revenues by an estimated $775,000 per year, due to increased UPL, or Upper Payment Limit, reimbursements from Medicare and Medicaid. MRMC Chief Executive Officer Rex Jones had initially proposed, that to retain Municipal League Benefits for the hospital’s employees, there may have to be some semblance of city government involvement, expressly permitting board seats by two city councilmen and the in-office mayor.

The Council in June granted Jones the ability to move forward with looking into the nonprofit establishment. But as time passed and more research was done, Jones, with the help of attorneys and auditors was told that with that many, or any, board seats occupied by the city, auditors would have no other choice but to list the hospital as a government entity, thus possibly negating all savings and new earnings projected for the nonprofit facility.

Members of the Magnolia City Council, Magnolia Mayor Parnell Vann, and members of the MRMC Board of Commissioners on Wednesday sat down for joint talks on the matter in an attempt to hash out any differences of opinion going forward.

Much of the council and the mayor admitted to wanting city board seats, while the hospital board — which were all recommended in the past by Vann and approved by the city council — with strong consideration from the CEO, held the view that an independent, self-perpetuating board for the new nonprofit was the proper way to move forward.

“I felt like things had slowed down so I met with Rex last week,” said Vann. “He and I respectfully agreed to disagree, but there had been some blockade on his board.”

Besides the Municipal League benefits for MRMC’s employees, which Vann said he thought had been secured, the IRS also needs to approve the new hospital’s 501(c)(3) nonprofit status. Articles of incorporation are needed to secure that, and cannot move forward without the City Council’s approval since the hospital is currently still government-owned.

As the discussions began, Steve Nipper, a former chairman of the MRMC Board and 13-year hospital board member, and sitting Alderman for the Magnolia City Council, put things in perspective before the discussions became too complicated.

Jones began by explaining that, when he came to the Council in May, no one was dissatisfied with the hospital’s board structure, but that the idea for the three city members to potentially sit on the new board was to satisfy the Arkansas Municipal League to retain city benefits. The difference between contracting outside health benefits for hospital workers and using the Municipal League, according to Jones, was a possible difference of up to $350,000.

“We wanted to work with the Municipal League to see if there was enough [city] control so that they were happy and would be able to provide that insurance for the employees, but not jeopardize the level of control that would prevent us from participating in the private provider assessment that would give the $775,000,” he said.

Jones added that the board structure was only a proposal at first, but, after months of meeting with attorneys and the Arkansas Municipal League, the latter stated that as long as there was “clear intent that the entity provides a service for the benefit of the municipality and the surrounding area” and that the board structure would be written into the bylaws in perpetuity, the League was on board.

The MRMC Board has proposed that six of the current members, which Jones and Nipper both noted possessed the best board make-up they had seen, would be moved over to form the new MRMC nonprofit board, with language that the city council has approval power to veto or accept the recommendations of the new self-perpetuating board.

“I think that would meet everybody’s needs,” Jones said.

“Running a hospital is nothing like running a normal business,” Jones added.

The hospital CEO also warned that, if the new nonprofit hospital was formed and it contained city government board members, it would possibly put a target on MRMC’s back as an outlier to all other area hospitals that have made the move. Jones also noted that, after speaking to an auditor from Little Rock firm BKD Associates, no other nonprofit hospitals that he knew of contained appointed government seats.

“What we don’t want to do is get in a situation where it looks like there’s too much government control and someone to come back at a later date and say, ‘You know what, I’m new to this office now, and I’m going to reinterpret that provider assessment from before that allowed you to do that — I don’t think it should have been done that way.”

Jones warned that such a hypothetical may sound “ludicrous to many,” but that the federal government when it comes to healthcare has the ability to backtrack years and slam a facility for multi-millions in what it perceived as backed payments or owed amounts, simply due to an interpretation.

“It happens all the time,” he said. “It happened to this facility. They went back three years on a cost report and this hospital had to pay back $1.2 million because of an interpretation issue.”

Jones later added: “The point being, why create a system from the get-go that makes us an outlier, that makes us look different than everybody else in the program, where we’re easy to get picked off?”

The CEO again reiterated that the nonprofit setup he has recommenced to the board is to develop a plan that “satisfies everybody” with enough city control by board approval power that the Municipal League is happy and enough limited city control that the government UPL payment officials are on board to provide an additional $775,000.

Emmert noted that, even with the MRMC Board’s plan, there is still a slight risk for any move. Jones agreed, but said the board’s plan is “not unlike the majority of other hospitals that are in it.” 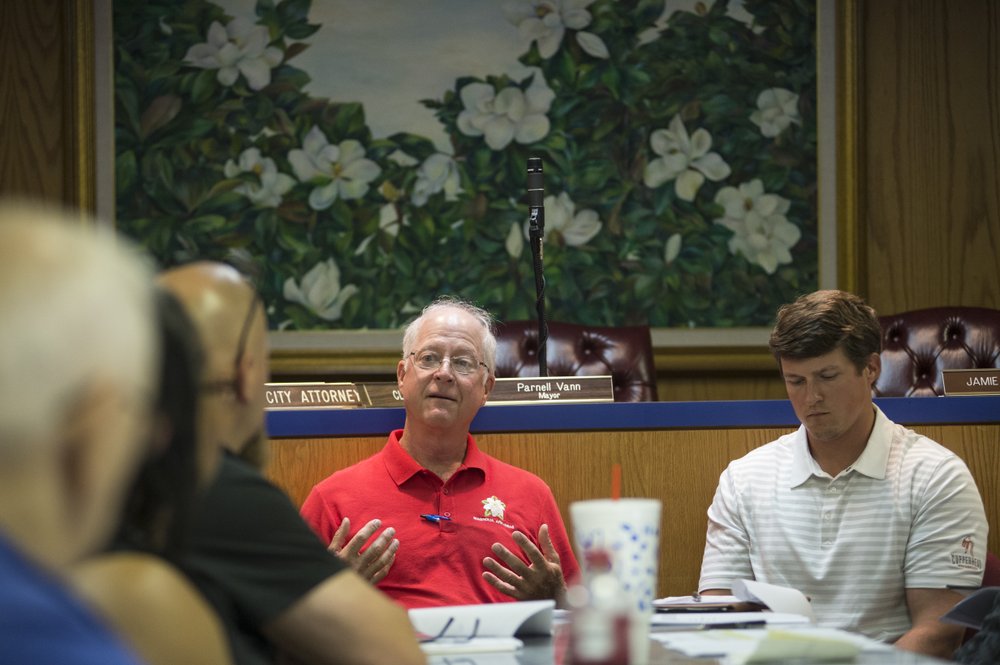 After hearing from Jones, Vann, along with Aldermen Tia Wesson and James Jefferson, still noted that they wanted three government board seats on the new nonprofit, non-city-owned hospital. The mayor’s primary gripe seemed to hinge on the fact he felt spurned after MRMC at first needed the council’s approval to seek the nonprofit status and help with benefits, but that now the city felt like it was “getting thrown out of the bus.”

“You do see that when you came to us, you needed us, and you asked us to do something, and we did,” Vann said to Jones. “We allowed you to go away and you said needed health insurance, and we got you health insurance. Three seats to the city council were offered, and it kind of feels like you’re kicking us to the curb, and you don’t need us, or you don’t want us.”

Alexander rebutted that he appreciated the mayor’s concern, but when reviewing most rural hospitals, they are struggling to make profits and that even larger hospitals such as UAMS and Baptist Health are losing tens of millions of dollars per year. He added that the sole purpose of the board coming to the city with the change was not alter the hospital board structure, but to simply increase revenues for MRMC by improving the UPL reimbursement amounts.

“We’re not going to be making a great profit,” he said. “There’s still thousands and thousands of dollars that we’re giving back to the community each year in charitable care or writing off bad debts, and those will never stop.”

Nipper added that he felt Jones’ requests from the city council in May and June were under the assumption of fluidity, with nothing set in stone, until hearing feedback from attorneys, auditors, the Municipal League, and others.

“I personally did not know how this would end up being,” he said. “We just wanted to help the hospital and didn’t know how it would end up.”

Other councilmen seemed to be on board with the changes. Alderman Jamie Waller noted that he initially wanted city board seats, but, in light of new revelations that such a move could jeopardize the entire reasoning of the nonprofit formation in the first place — to increase revenues and keep the facility afloat — that he supported MRMC’s new layout.

“Ultimately, it seems there’s a change in circumstances, and we’ve got to be willing to adjust with new information,” he said. “I agree with the mayor that that’s what we wanted to happen, but if we can’t go there, we still need this to happen one way or another.”

Not all of the City Council members were on board at all with local government involvement in healthcare. Alderman Jeff White indicated that he thought the move was wrong altogether and that, if someone has expertise in the medical field or is well-versed in healthcare board membership, they should remain.

“I don’t want us to have control, and I don’t think it’s wise,” he said of the city government. “Especially, if there are some reimbursement issues that come up in the future, I don’t want the City Council to have control. I don’t care how many board members we have on the board, we can’t run a hospital.”

He also noted that, at some point down the line, there be no one on the city council with knowledge of hospital billing or healthcare at all.

“Why would we want to force-feed city council members into that the board, and have the possibility of jeopardizing some sort of reimbursement that may come along because they say it’s government-run?”

As discussions came to a close Wednesday, Alexander handed out articles of incorporation and bylaws for the council to review and potentially vote upon. With all of the members present, the vote could have occurred, but the mayor indicated he desired Magnolia City Attorney Michael Boyd to review the bylaws and articles first.

Jones noted that the paperwork was exactly what Friday, Eldredge, and Clark of Little Rock, the law firm aiding the city and hospital in the nonprofit transition, drew up previously, minus the new board structure.

The city council members also that they would like to review the documents first as well, but indicated they should be voted upon sooner rather than later. Vann indicated that the topic could be placed on the next regularly scheduled Magnolia City Council’s agenda at its Monday, Sept. 23, meeting.

The meeting ended on positive notes, with the mayor saying that, although he disagreed with Jones and the MRMC board, “At the end of the day, we all still love each other” and wanted the hospital to prosper.

Others agreed, noting that the main goal of the meeting was to help the community.