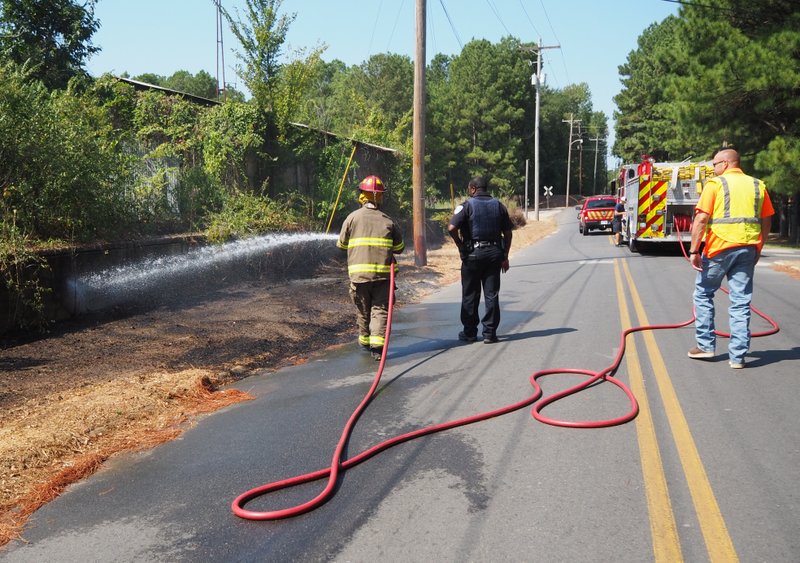 Dealing with extra dry conditions, the Magnolia Fire Department on Monday responded a grass fire at the corner Gant and Ross Street in Magnolia. The small blaze was quickly extinguished, but the dry, dead grass easily caught fire. - Photo by J.D. Bailey

According to the U.S. Drought monitor map, much of Columbia County -- primarily Magnolia and south -- is currently experiencing “abnormally dry” conditions. The rating is the lowest level on the drought monitor map. There are still designations of moderate drought, severe drought, extreme drought, and exceptional drought

The designation suggests that the short-term dryness has slowed planting and the growth of crops, but that there are still some lingering patches of moisture in the ground. Pastures are also affected by the dryness.

There extreme northwestern and much of northeastern potion of the county, however, has not yet been designated with any drought or dry conditions.

A U.S. Drought Monitor of Arkansas from Sept. 3 shows the location and intensity of drought across the state. As shown, Columbia County and much of southwest Arkansas are currently in ‘abnromally dry’ or moderate drought conditions.

In total, only the extreme southwest section of Arkansas is currently seeing extremely dry conditions. According to the U.S. drought map, some 89,000 residents, or 3% of the state’s population, are in abnormally dry conditions, with 29,000 (1%) of those in moderate drought areas.

Since 2000, the longest drought period in the state lasted 101 wees, from the late April 2019 to late March 2012, according to the U.S. Drought monitor. The harshest single week for drought occurred in August 2012, when nearly 54% of the state was affected with “exceptional drought” conditions.

The dryness looks to last for a while in the area. Early weather forecasts from the National Weather Service show virtually no chance of rain over the next 10 days and only a slight break in heat, with highs hovering in the mid 90s.