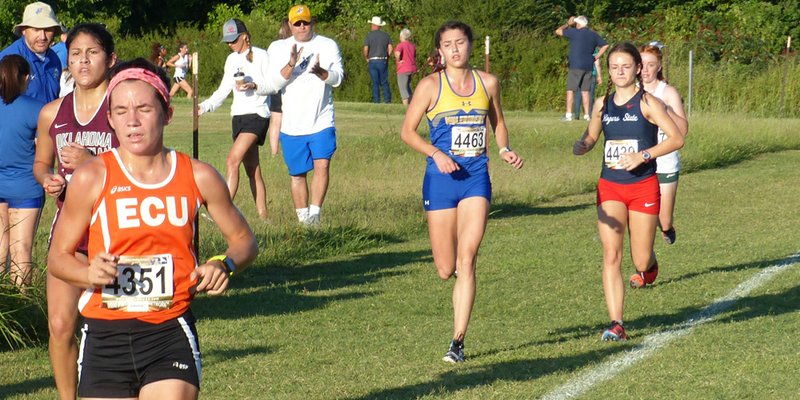 SAU’s Carley Hale competes in a meet last season in Oklahoma. She will guide the Lady Muleriders in a cross country meet this weekend at UCA in Conway.

The Great American Conference recently released its preseason coaches’ poll for women’s cross country, and the Lady Muleriders found themselves in fourth place with 93 points, the highest-placed team to not receive a first-place vote.

The Lady Muleriders return seven out of 10 people from last year’s team, including second-team All-GAC Carley Hale, who received that honor for her 15th-place finish in last year’s conference championships.

The Lady Muleriders open their season this weekend at Division I Central Arkansas, before making trips in successive weekends to Arkadelphia, Joplin, MO, and Fayetteville.

They will then host the 9th Annual Lois Davis Invitational on Oct. 11th to close out the regular season before taking part in the GAC Championships in Arkadelphia two weeks later.

In other sports of interest, the Magnolia 8th and 9th grade Cubs will kick off the football season at Panther Stadium tonight against El Dorado. The 8th graders will play at 5:30 p.m., followed by the freshman game around 7 p.m. A week from tonight, the Cubs will travel top Nashville for a pair of games.

In volleyball, the 7th grade Cubs will play a Red-White scrimmage at Panther Arena beginning at 3:45 p.m. The varsity and junior varsity Panthers will follow with a match against Little Rock McClellan, beginning at 5 p.m.

On Friday, the Panther football team will host Crossett at Panther Stadium. Kickoff on Don Hubbard Field is set for 7 p.m.