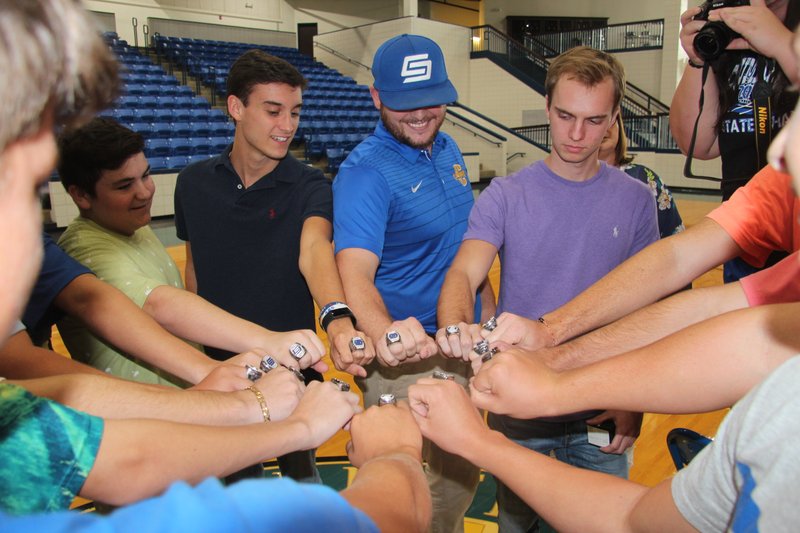 The Columbia Christian Crusaders show off their state baseball championship rings they received during a ceremony last week. Coach Chase Whitehead was in his first year at the when Columbia Christian won the title last year. - Photo by Chris Gilliam

Columbia Christian got off to a shaky baseball start last season, but it didn’t take then first-year head coach Chase Whitehead and the Crusaders long to turn things around.

When the 2018-19 season ended, Columbia Christian was crowned the Arkansas Association of Christian Schools (AACS) State Champion. The three CCS seniors who graduated from that team are Max Braswell, Taylor Morris and Jonathan Mitchell. All were named to the AACS All-State Baseball Team.

The Crusaders were the No. 1-seed team in the tournament and knocked off Southwest Christian Academy 11-6 to claim the crown.

“It was a slow start because we didn’t have all of our players. Basketball season was going on and some of the kids played both sports,” Whitehead said following CCS’s traditional state championship ring ceremony last week inside the gymnasium on the campus. “We had to wait until they were done and we got our tails kicked about a week after the first practice.”

However, Whitehead said the team miraculous came together and put some really good wins together.

“Coach (Cody) Lucy and I challenged the guys during practice and they responded. I guess we started clicking at the right time,” said Whitehead.

It was not the first time that Whitehead and Lucy have received state baseball championship rings. Lucy was a freshman and Whitehead a senior when they helped the Taylor Tigers capture the 2013 Class A baseball crown.

“At Taylor, when we both were there, the only game Chase Whitehead Crusaders’ head coach

CCS receives championship baseball rings we got to play together in was at Baum Stadium. We got to win a state championship together as players and now as coaches,” explained Whitehead. “That’s just a God thing right there. It’s awesome.”

Overall, Whitehead said the baseball program at Columbia Christian is solid despite the few numbers.

“We are going to average about 11 or 12 players a season, but there are some good athletes here,” explained the coach. “We are trying to bring in a new culture of having love and respect for the game of baseball.”

Regardless of size or school’s classification, Whitehead agreed that it’s difficult to win a state championship in any sport at any level.

“We took our lumps and losses hard, but I was very proud of the guys on the way they stuck in there. They worked hard and are the ones who deserve the credit,” said Whitehead