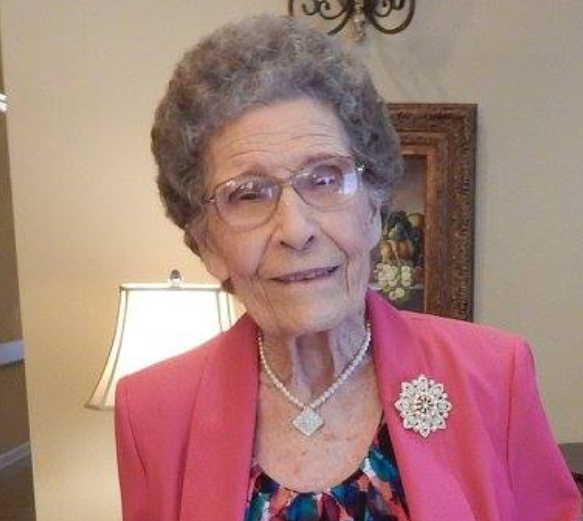 Verneda Kelly Stewart, 102, of Magnolia passed away on Friday, October 25, 2019 at the John R. Williamson Hospice House in El Dorado.

She was born on October 8, 1917 in Tulip to the late Ulman Earl Kelly and Mertie (Myers) Kelly. She was a charter member of Bethel Church in Magnolia and current member of First Baptist Church. She retired from Shanhouse where she worked for over 20 years.

Verneda organized the gospel singing at Dudneywood and Community Compassion Center of Magnolia, which awarded her the Volunteer of the Year from the State of Arkansas on November 9, 2016.

She was preceded in death by her parents; husband Brad Hilton Stewart; two sisters, Coy Mae Parker and Pearline Matthews; and a brother James Ed Kelly.

Verneda is survived by her three children, Hilton and Linda Stewart of Magnolia, Kelly Don Stewart of Waldo; Twanda and Jerry Davis of Carthage, Missouri; a sister Alyce Bush of Malvern; 4 grandchildren, Daron and Melissa Stewart of Frisco, Marla and Chad McRae of Bentonville, Sean and Beverly Davis of Joplin, and Nicole and Stanley Kost of Carthage; and six grandchildren, Lindsey, Gracen, Brock, Riley, Ethan, and Linde.

Funeral services were held on Sunday, October 27, 2019, at Lewis Funeral Home Chapel with Pastor Jerry Davis officiating. Burial followed at Mt. Moriah Cemetery in Nevada County under the direction of Lewis Funeral Home, Inc. in Magnolia. Visitation will be Saturday evening from 6:00 to 8:00 pm at the funeral home.