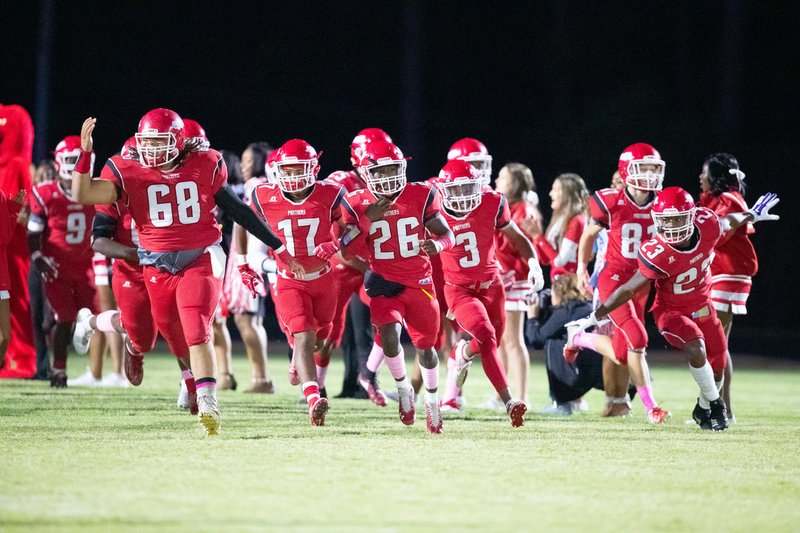 With two games remaining against teams with a combined one victory on the season, Magnolia has put itself in a position to make the football playoffs for only the second time in nearly two decades.

“The next two games are not given. We still have to go out and prepare like they are the best teams we will ever play,” said Coach Mark King, following the Panthers’ 35-34 last-second win at Little Rock McClellan. Magnolia will host the winless De Queen Leopards on Friday and close the regular season at Hope, whose only win was against the Leopards.

The Panthers sit in a three-way tie for second place with Arkansas High and Camden Fairview , all with identical 3-2 mark in the 5A-South Conference. They are behind leaders Hot Springs and Hot Springs Lakeside, both 4-1. As of today, the Panthers are the fourth-seed with two weeks remaining in the regular season.

“We have to take care of business the next two weeks and we will be heading to the playoffs,” said King. “De Queen and Hope are both good teams, capable of beating anybody. They practice hard like everyone else and come out every Friday expecting to win.”

Magnolia’s last two playoff appearances were in 2016 and 2010. In 2009, the Panthers won a total of seven games and can match that number this season.

On a wet, soggy night in Little Rock, the Panthers threw the football more than they had all season against the Lions. They opened with a 40-yard pass from Braelyn Beasley to Amir Cooper. Beasley later hit Phillip Simiyu on a 30-yard strike, making it 6-0.

After stopping the Lions at the 18, James’Darius Smith later ran 59-yard for a touchdown, making it 14-0 early in the first period.

A high snap on a punt that was recovered by the Lions at the Magnolia 5 later resulted in a 1-yard score by Jordan Harris, closing the gap go 14-8 following the two-point conversion. After both teams traded fumbles, the Lions drove only 38 yards for their second score. A 3-yard burst and two-point conversion tied the game at 14-14.

McClellan took a 20-14 lead with 8:14 to play in the third, but a minute later Beasley broke loose on an 89-yard touchdown run to put the Panthers back up 21-20. Smith had a 70-yard TD brought back on a penalty, but a 40-yard scamper later by Beasley allowed the Panthers to threaten again.

However, Harris intercepted a Beasley pass at the 9 and returned it 91 yards for a touchdown, giving the Lions a 26-21 lead.

After a goal-line stand at the 1 early in the fourth, Robert Mack later threw a half-back pass to Kahlil Collins that resulted in a 98-yard touchdown play with 9:20 to play. The Panthers regained a 28-26 advantage.