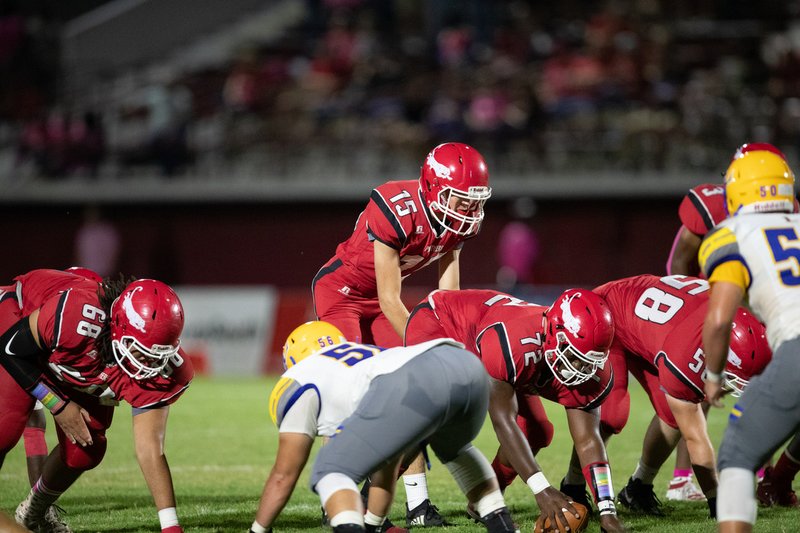 Magnolia QB Tanner Nielson (15) lines up during a drive against Lakeside on Oct. 4. - Photo by Bill Nielsen

The thing that’s making first-year head coach Mark King shake his head the most is the number of times his Panthers are fumbling the football.

“It’s a distraction, but we try not to dwell on it in practice,” King said of the fumbles.

The Panthers have been charged with 17 fumbles so far this season and 10 have been credited to senior quarterback Braelyn Beasley.

“We talk about turnovers in general and have to stop shooting ourselves in the foot. The biggest thing about our kids is they have to learn how to win,” explained King.

Though the Panthers fought hard two weeks ago at Arkansas High, the coach said he felt his squad was turning a corner.

Magnolia lost five fumbles in the loss to Arkansas High and five last week at home against Hot Springs Lakeside.

“The effort was there, but we were just flat. That’s my fault and it’s my job to have them ready,” he said, adding the Panthers have a big challenge this week at Camen Fairview.

The Cardinals will present the league’s leading rusher in Erick Hall, who is averaging 128.3 yards per game or 6.3 yards per carry.

Quarterback Logan Robertson is third in passing with 667 yards (166.3 yard per game) and five touchdowns. One of his favorite targets is Patrick Rucks, who has four TDs in three games.

Other key players are Ja’Coriar Brown and Reshard Clardy.

The Cardinals lost a one-point decision to Arkansas High last week and had a five-point win over Hot Springs Lakeside the previous week.

During Magnolia’s battle against Hot Springs Lakeside, Magnolia still didn’t find a cure for its fumbling problem and lost 42-21.

“We didn’t play well and we were flat. We turned the ball over way too many times and must find a way to correct that,” said head coach Mark King. The Panthers, who lost five fumbles for the second consecutive game.

The Panthers fumbled three times in the first quarter alone and the Rams turned two of them into scores. They dropped the ball on the second play of the contest, which led to a Hot Springs Lakeside 14-yard touchdown pass from Will Ross to Logan White, making it 6-0.

Four plays into its second possession, Magnolia committed another fumble that was recovered in the end zone by Chase Norwood, pushing the score to 14-0 after a two-point conversion. The Rams went up 28-0 after a 36-yard TD pass from Ross to Chase Cross and a scooped fumbled for a 6-yard touchdown by Nasin Cook midway through the period.

Ross and Cross hooked up again early in the third quarter on an 11-yard strike, making it 42-7.

Midway the third period, with the mercy rule in effect, Braelyn Beasley scored on a 23-yard run to make it 42-14. He also scored from eight yards out in the fourth quarter to make it 42-21.

“We gave them three scores quick right there in the first half and down 21-0 before we knew what was going on,” said King.

“I didn’t have them ready to play and ultimately that my fault. We have to go back to the drawing board and get back to basics,” he said.