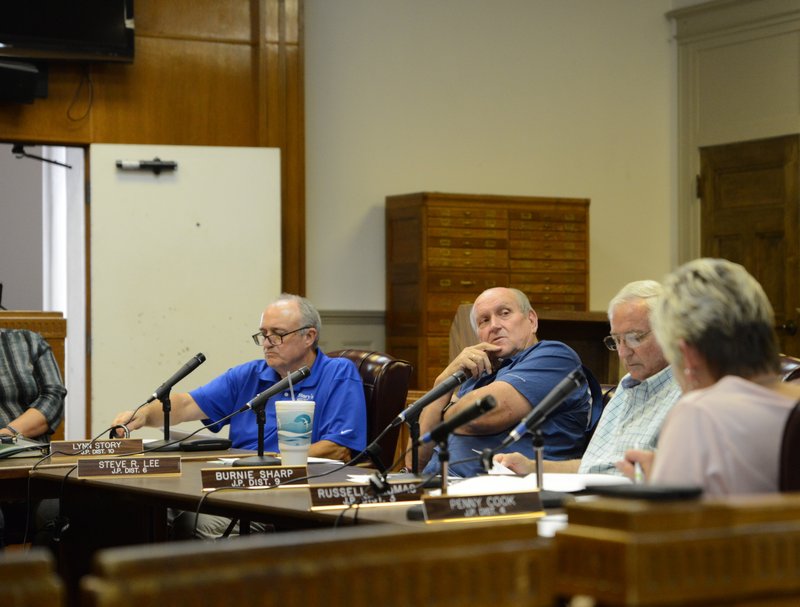 The issue of subsidizing labor efforts at Abilities Unlimited’s Magnolia recycling center was again discussed and mulled over this week by the Columbia County Quorum Court.

The issue was first brought to the Court’s attention earlier this year, when Richard Metzelaars, the recycling supervisor at Abilities Unlimited, informed the county government that due to a combined whammy of a down market and the upcoming minimum wage hike to $10 per hour set to take effect on January 2020, he did not know how the recycling center near W. University Street in Magnolia could be sustained in its current form.

The supervisor previously requested a $2,000 per month stipend from the county to help pay his workers’ hourly wages. Abilities Unlimited, a nonprofit group that employs many mentally disabled area residents, or clients as the nonprofit refers to them, handles the sorting of the county’s recyclable solid waste goods. In turn, the local organization sells what it collects on the open market, where China is the biggest customer. Abilities’ primary sales items and largest revenue-makers are cardboard and plastic bottles.

But with domestic oversaturation of the market combined with trade tensions and a natural economic rivalry between the United States and China, the world’s top two financial superpowers, the overseas market has all but dried up.

To further evaluate the needs of Abilities, Oliver Thomas, Columbia County Justice of the Peace and head of the Quorum Court’s Solid Waste Committee, stated that Metzelaars and the nonprofit had submitted a list of income and expenditures to the county, but that no recommendation could be made at present on whether to approve or not approve the monthly subsidy. The reasoning, according to Thomas, was because of still unclear finances from Abilities, specifically how much extra outside income the nonprofit receives from outside sources.

Sixty-thousand of the revenue was from the sale of recycled goods and the remaining $2,000 was netted from the sale of rags at Abilities Unlimited, according to Thomas. The figures submitted to the county reflect the sales and labor and expense costs from July 2018 through July 2019.

“We didn’t have a recommendation because we don’t know how much additional income they get from any outside sources, and we had no communication whatsoever with their board of directors,” Thomas added.

In total, the W. University facility employs 27 clients, according to Thomas. The nonprofit is reimbursed by the state on much of the labor, but only if the employee shows up to work five hours or more.

“If they don’t come, we get nothing,” said Metzelaars.

The supervisor also noted that the total expenditure figure of $129,000 did not include government reimbursements. On Monday, he said he did not have the figures on-hand to know exactly how much those payments equated to.

When asked if Abilities receives any extra government monies, Metzelaars noted that the nonprofit can bill for a client’s five hours, but if he does not show up for work, the nonprofit gets zero reimbursements.

“It’s five hours minimum,” he said. “If they show up for four — there’s nothing.”

He also said that the employees can work up to 7.5 hours per day.

“The sad part to me – and I love Abilities Unlimited – is the market, and they’ve got all these employees,” said JP Penny Cook. “It’s just a real sad situation. At one time, I know, it was a booming business.”

In other solid waste news, County Judge Larry Atkinson informed the Quorum Court that the civil lawsuit filed in 2015 by the City of Magnolia against the county and state treasurer over solid waste fund tax distribution was heard by the Arkansas Supreme Court in late August and that the three-judge panel sided with the county’s position. The decision re-affirming a lower circuit court ruling made last year. The judge, though, noted that the issue was not over, and that the city was now pursuing a rehearing by the State Supreme Court. County Attorney Becky Jones noted that the court has the ability not to re-hear the case, but could also take it up again. As reported by the Banner-News in September, the county’s part alone in defending the case has cost local taxpayers approximately $150,000.

For new business, the only item on the agenda Monday was the re-appointment of David Sisson to the Rural Development Authority Board. Sisson, who has served as a replacement member on the panel since last year, was unanimously approved for a five-year term by the court.