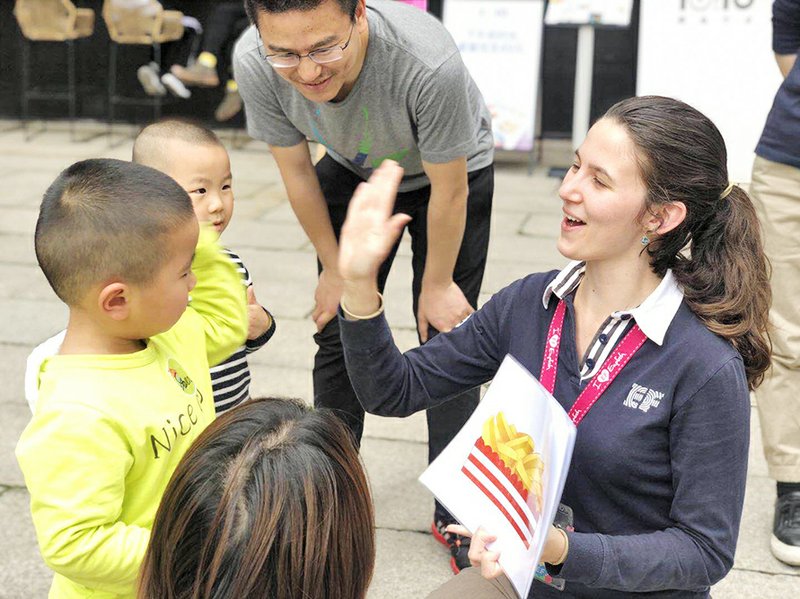 A lifelong passion for travel and a heartfelt desire to teach inspired Southern Arkansas University alum Jacinda Passmore to reach out to students in China, where she has been teaching since Thanksgiving of 2018. Her hard work and dedication – as well as skills she gained as an Agriculture Education major at SAU – helped her win a nationwide teaching competition in China that took three months to complete and culminated in a journey to Beijing.

Passmore, from Conway, Arkansas, said she was shocked and surprised to have won the SINA National Five Star Teacher Award, which covered all areas of academics taught in China and put her in direct competition with Chinese teachers. “I could not believe it,” she said of her win. “I am thankful for the experience and to all those who supported me in China and back home in Arkansas. My fellow teachers in China are proud of me and often tease me about being a ‘celebrity’ of the region.”

Her journey began by responding to College of Education travel fliers she had seen on the SAU campus prior to graduating in the spring of 2018.

“They were advertising a trip to China, and I thought, ‘this could be my graduation gift to myself.’ The tour was through Education First, and I had wanted to go on a tour with this company since I was in high school.”

While on the trip, Passmore learned of the company’s teaching opportunities in China, Indonesia and Russia – opportunities that matched her plans of using her bachelor’s in Agriculture Education to teach agriculture in the classroom.

She then applied to the Education First teaching program. “I applied to work for the company in China. Only five days after applying, I landed a job there as an ESL teacher.”

She arrived in China on Thanksgiving Day and was given her choice of three cities in which to work: Beijing, Shanghai or Fuzhou.

“I chose Fuzhou because I had seen pictures with trees and a river, so it reminded me of home.” Fuzhou is in the Fujian province of southern China. “The city is considered small, which blows my mind since its population is 7 million!”

She participated in the SINA competition, for teachers of English, math, music, science, and swimming. The contest took three months to complete and featured three rounds, with the final round taking her to Beijing.

“The Director of Studies at my (school) had mentioned this prestigious competition in February, and since I love education, I told myself I would try out,” she said. “I didn’t know these contests existed so I was excited to compete in something that focused on my passion.”

“We have to make a short video that showed off our teaching styles and philosophy,” Passmore said. “I wholeheartedly believed there was no chance I would make it to the next round.”

The first round included 19 days of voting and took three weeks to complete.

“I had 527 social votes, the lowest number of votes of all the thousands of competitors who entered,” she said. “I still thank everyone for their support. My odds weren’t looking so good.”

However, her score on her video was sufficient to pull her up in the ranks, and she advanced. “In round two, there was no voting, only judges who viewed a second video we created,” she said. “Only two people from Fuzhou made it to this round – a local teacher from my school, and myself.”

The third round in Beijing was three days long, with about 127 competitors. “I couldn’t believe I had actually made it,” Passmore said. “I wasn’t worried about winning, I was proud of this accomplishment.”

She and her co-teacher from Fuzhou had four minutes to teach a mini-lesson “on any topic we wanted. I tend to be hard on myself so I believed I didn’t get to fully show who I am as a teacher, but according to my friends, I did extremely well in the Q&A portion.”

In addition to an individual teaching section there was also a team-teaching session. Passmore and her co-teacher had eight minutes in which to teach a mini-lesson.

“While I was in Beijing, I met so many amazing teachers, literally the best teachers in China, and learned so much from them,” she said. “I learned new classroom management techniques and new games to utilize in the classroom to spice up my normal routine. Everyone there was so supportive and very eager to watch each other’s lessons to help them prepare and gave constructive feedback to make sure everyone was able to perform their absolute best.”

The winners of the competition were announced the night before the award ceremony “and I was too scared to look at the results,” Passmore said. “My co-teacher told me I had won and I could not believe it. How could I, a random American who had been here less than a year, win a teaching contest in China? My odds seemed slim.”

She was the first SINA winner from the Fuzhou region. “It was a fun yet stressful experience,” she said. “I never thought I would be teaching in China, I always saw myself teaching agriculture in a high school in Arkansas.”

Passmore said that of all the Education First foreign teachers in Fuzhou, “I am the only one certified and the only one who actually studied education in a university setting. I often train and mentor new teachers. Though I am certified to work with high school-age students, I typically work with elementary-age kids here in Fuzhou.”

Her education at SAU has played a vital role in her life as an educator in China. She understands child development, uses different approaches and methodologies to educate multiple students, and is able to communicate with parents on academic steps for their children.

“It’s great knowing that my time and service with SAU is helping train and prepare new teachers and educating students in another country,” Passmore said. “Though I am more than 7,900 miles away, I am still a very passionate Mulerider!”