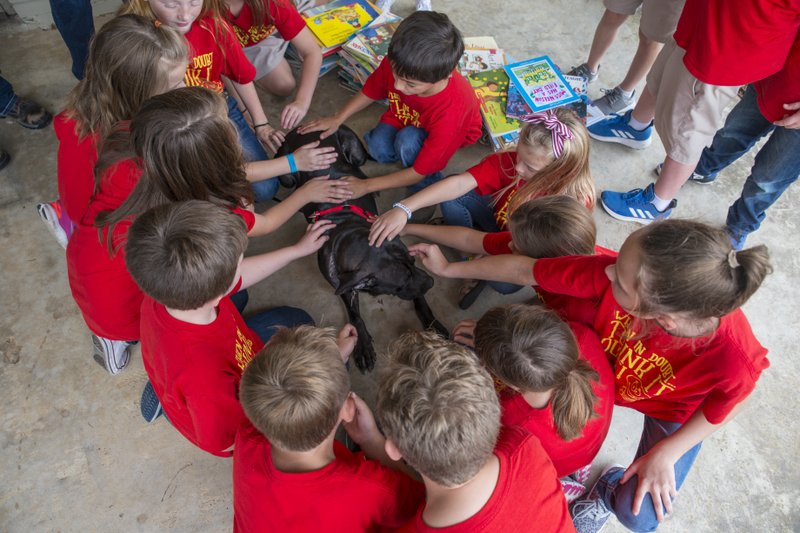 It’s not every day that a group of nine-year-olds can claim they made a difference in the world. But in the past few weeks, that’s exactly what Betty Wilson’s third-grade Columbia Christian School class, along with a group of other charitable individuals in the community, have done.

No one cured heart disease and there probably won’t be any Nobel Prizes handed out, but what they did was help an ailing, drastically mistreated canine back to health through good deeds.

The tale of Bear, the pit bull-labrador mix, and her way back to health and happiness began weeks ago when the Columbia County Sheriff’s Office was alerted to a regular domestic police matter in the county. But what they discovered at the address was more than they had first known. 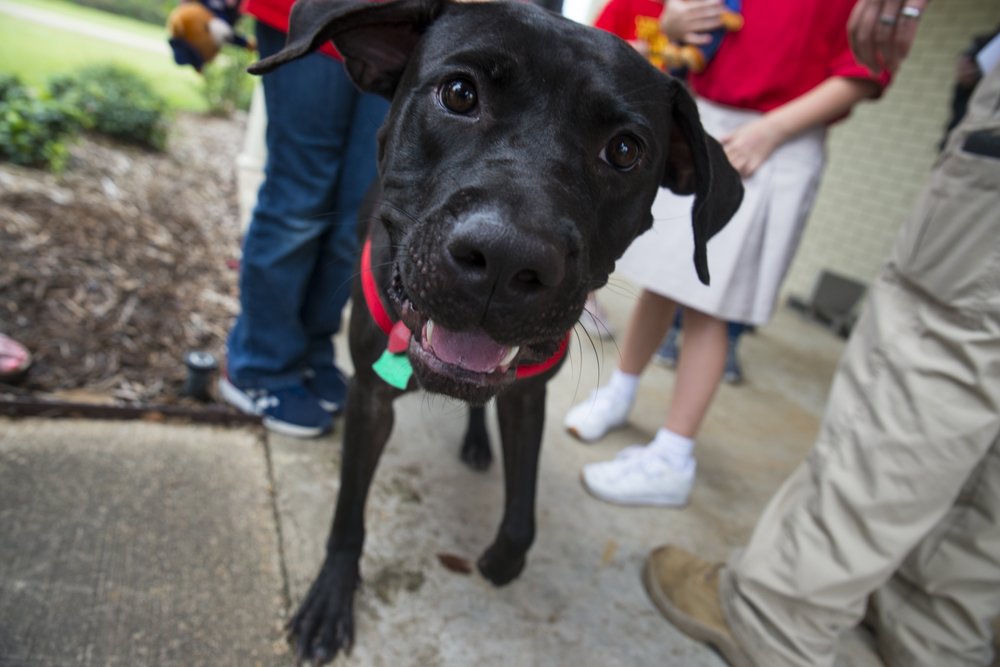 There, the officers also found a severely mistreated dog lying on a patch of barren dirt with a chain embedded so deep and so tightly around its neck, the skin seemed to be all but growing around the metal rings.

“The wound was open and you could see the chain,” said local veterinarian Dr. Mark Bryan. “We just had to cut it out because it was embedded so much.”

In the early morning hours of Sept. 15, Troy Alphin, president of the Columbia County Animal Protection Society, or CCAPS, received a call from the Sheriff’s Office alerting him to the situation. He then relayed the message to Bryan, who then performed emergency surgery on the canine.

With the bad areas now removed and cleaned, the excess skin on the dog’s neck was perfect for restitching to let heal anew.

“The pictures really didn’t do it justice,” Bryan added. “Her head was so swollen, she looked like a loggerhead turtle. It was not recognizable.”

The veterinarian, according to Alphin, also claimed that Bear’s injuries were in the top five of the worst he’d ever seen. 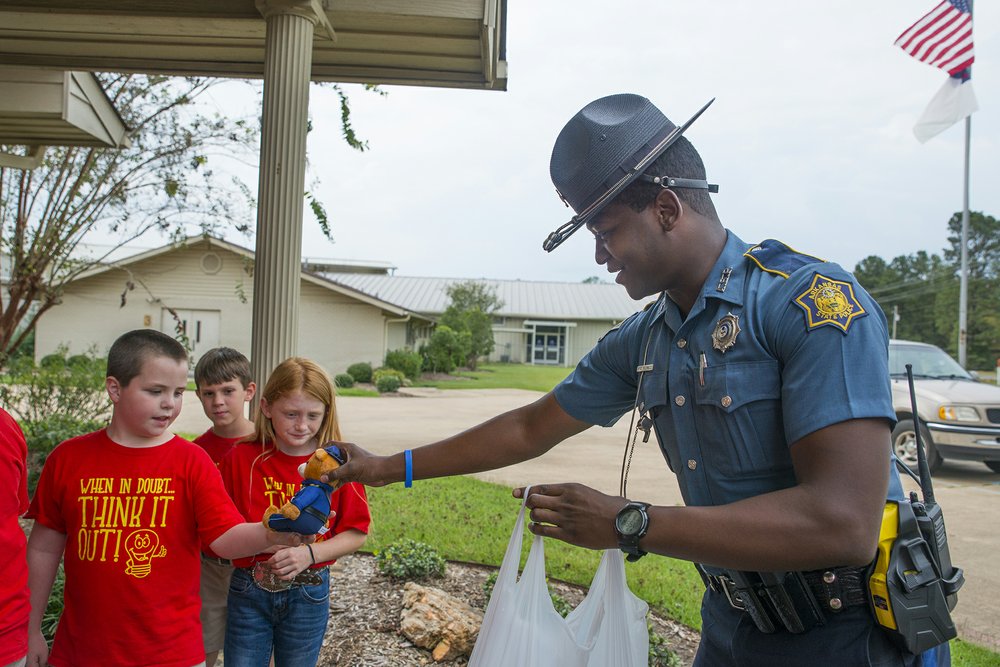 Arkansas State Trooper David Fielding (above right) as he passes out stuffed ASP's signature stuffed bears to the CCS third grade class in for their help in raising money for Bear the dog's surgical and medical care. 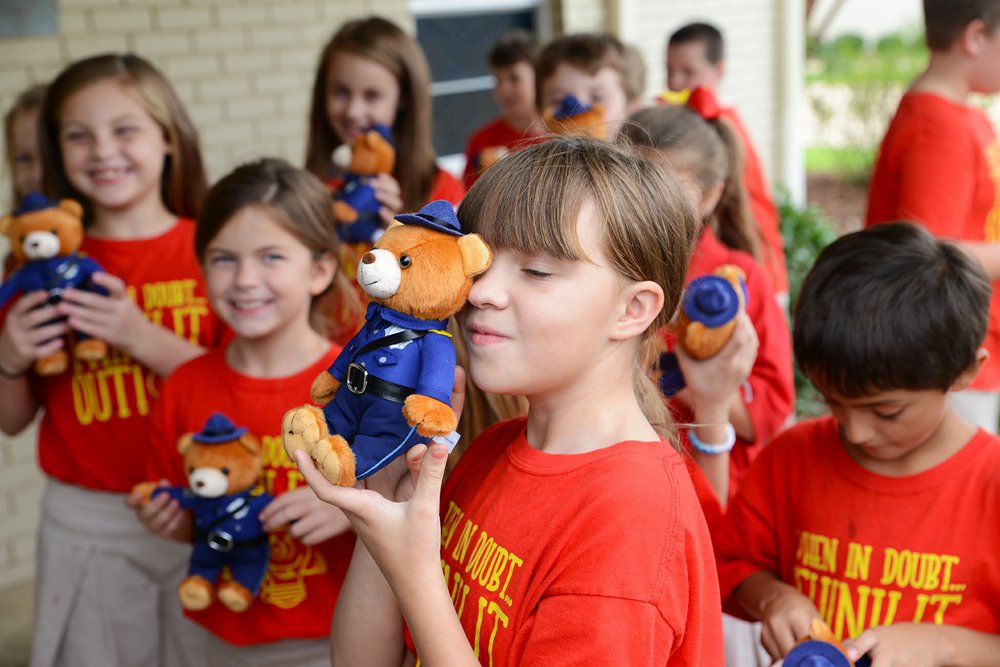 Wilson’s third-grade class came into the picture after CCAPS released photos of the dog that was now named Bear after Mallory Waller, one of the responding deputies to the initial call adopted the canine. Every year, the CCS class performs a project that tasks the kids with reading books for donations. But once Bear’s story flashed across social media screens, the donations now had a purpose and a name: CCAPS and the newly-created Bear Fund.

“I saw those horrendous pictures, and I said, ‘We’re going to amp it up,’” Wilson explained.

When the teacher presented her students with the opportunity to sponsor the fund that would be used to pay for emergency surgery needs on the canine as well as food and medical supplies, the kids, Wilson said, were “all in.”

“They had to read the books and do a report so I knew they actually did it right,” she said. “We had a sign-in sheet and they got a sponsor and an amount of money.” 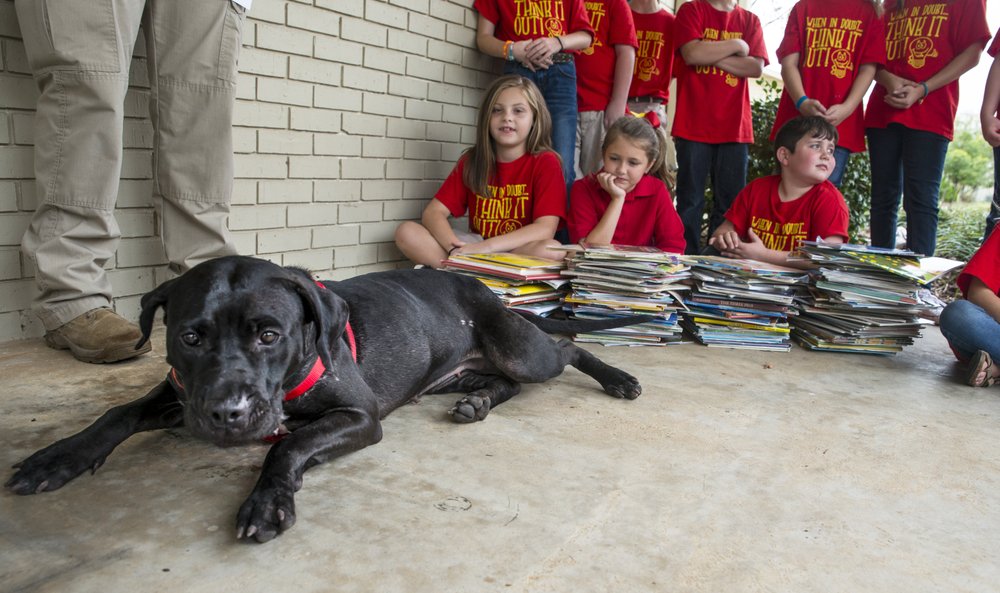 Bear the dog as she relaxes next to Betty Wilson's third grade class at Columbia Christian School.

Today, the Bear Fund includes around $1,200, with donations from the books and private, third-parties that saw the Facebook pictures and posts from CCAPS.

“The money will be used for anything Bear needs in the future,” the teacher said.

On Friday, Bear, along with Waller, Bryan, Alphin, workers, and sponsors of CCAPS, converged on Columbia Christian School to see Bear meet the students that made her recovery possible for the first time. The estimated 2- to 3-year-old canine was timid at first, but eventually warmed up to the class and received as much adoration and puppy love as possible from the astonished third-graders.

And with a name like Bear, Arkansas State Police Trooper David Fielding was on hand to issue every class member a signature ASP police bear.

“It just tugs at your heart,” said Bryan. “I just know there are so many more dogs that need help.”