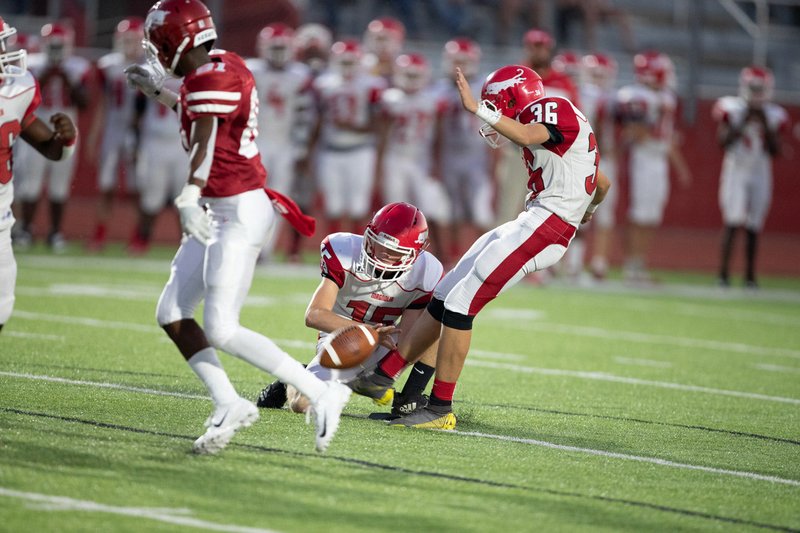 A pair of sophomores have stepped up this season and made Magnolia’s points-after-touchdowns (PATs) one less worry for Panther head football coach Mark King.

Place-kicker Jay Todd Baker is 15-of-15 on the after four games and classmate holder Tanner Nielsen is doing a good job of getting the ball on the tee, even after some low snaps. With King’s flexbone offense averaging nearly five touchdowns or 32.0 points per contest, Baker and Nielsen are expected to get plenty of more PAT opportunities.

Their next chance should come as early as tonight as the Panthers (2-2, 0-1) host Hot Springs Lakeside (2-2, 0-1) at Panther Stadium, beginning at 7 p.m. It will be Magnolia’s 5A-South Conference home opener and the Rams’ first road trip in league play.

With the exception of on-side kicks, Baker also handles kickoff duties. Though able to get the ball to the end zone, most of his kickoff are placed around the 20 or 25 on either sideline. This is done by coaches’ request, to prevent long kickoff returns.

However, Baker did accidentally send one to the 10-yard line near the center of the field, which was returned for a TD.

“That was just a miss hit by our kicker. We tried to kick it in the corner and kicked it right to him,” King said of the touchdown return by the Razorbacks. “We didn’t cover and that was an overall mistake by the special team.”

Magnolia’s on-side kicking duties are handled by junior Jakameron Zachary. He had perfect short, bouncing kicks against Crossett and Texarkana, which were recovered by the Panthers.

Though there are no problems within the kicking department so far, the Panthers are still searching for ways to keep from fumbling the football. They have lost 15 through four games or an average of 3.3 fumbles per contest.

A pair of seniors lead in the category, with quarterback Braelyn Beasley ahead with seven fumbles and running back Amir Cooper following with four. Classmate Cameron Warren has two, while junior James’Darius Smith and sophomore Kendrick Carey have one fumble each.

Following the Texarkana loss where Magnolia lost five fumbles, King said his Panthers must stop beating themselves with the mistakes.

“We just can’t do that and expect to beat good teams. We get a good drive going and fumble the ball or pick up a penalty that sets us back,” he said.