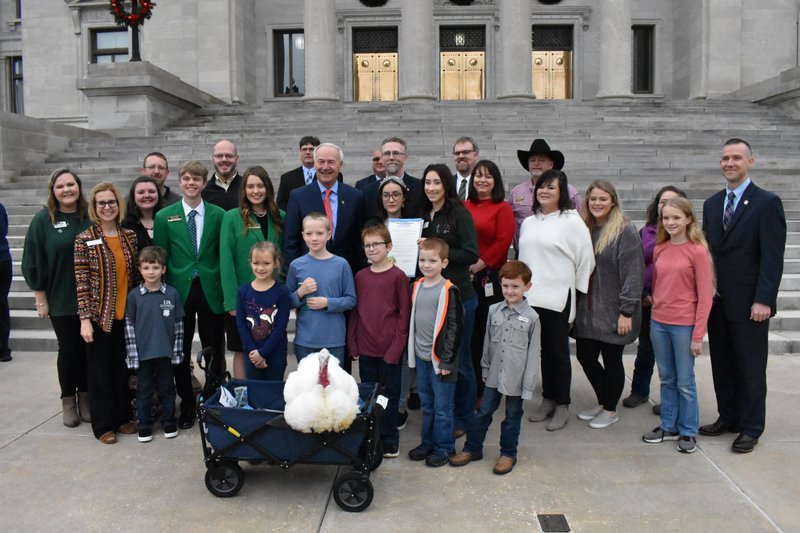 LITTLE ROCK – During a ceremony this week at the State Capitol, Governor Asa Hutchinson joined agriculture leaders, industry partners and 4-H and FFA representatives in declaring the week of Nov. 24-30 as Turkey Week in Arkansas. The Turkey Week proclamation highlights the state’s turkey industry and its value to Arkansas’s economy and agriculture industry.

“Agriculture is our state’s Number One industry, and it has been successful due to the hard work and perseverance of the farmers and ranchers who work hard every day to provide our state with healthy food. Arkansas poultry farmers produce over 11 percent of all turkeys raised in the United States, making the poultry industry a significant part of our state’s economy. I am grateful for all our farmers do for Arkansas,” said Hutchinson.

Each year, agriculture contributes more the $21.4 billion in economic value for the state.

“The poultry industry, which includes turkey, chicken and eggs, is an important part of Arkansas’s diverse agricultural landscape, representing more than 50 percent of agriculture’s total cash receipts, said Agriculture Secretary Wes Ward. “We are thankful for the farmers who provide this protein throughout the entire year.”

Marvin Childers, president of The Poultry Federation, added that Thanksgiving week is the perfect time to recognize everyone involved in making Arkansas the third largest producer of turkeys in the nation.

“Thank you to our dedicated farmers, who raise 31.5 million turkeys per year, and industry leaders, like Cargill and Butterball, for their impact on our state,” he said. Learn more about the Arkansas turkey industry and its economic impact, here.