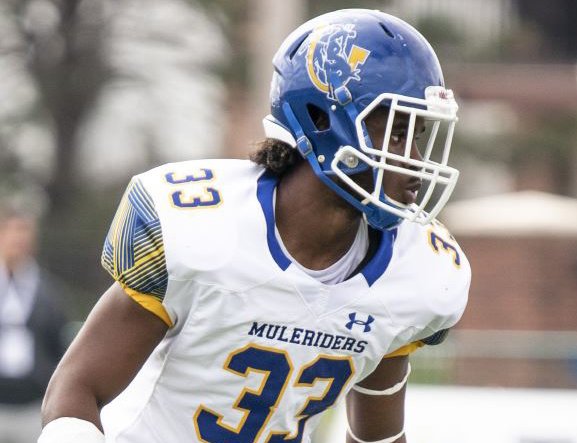 Lawrence, a redshirt senior defensive back from Irving, Texas, graduated with a Bachelor of Science degree in Chemistry and a 3.47 GPA as an undergraduate student. As a graduate student in SAU’s Rankin College of Business, Lawrence carries a 3.50 GPA as he pursues his Master of Business Administration degree.

He is one of just four players from the Great American Conference selected to the Super Region 3 Academic All-District First Team.

The CoSIDA Academic All-District teams include the student-athletes listed on the following pages and are divided into geographic districts across the United States and Canada.

Lawrence and the Muleriders (8-3) will play in the Heritage Bowl on Saturday, Dec. 7 at Corsicana (Texas) Independent School District Tiger Stadium. Kick-off is scheduled for noon and will match the Muleriders against Eastern New Mexico (7-4).

The Heritage Bowl, formerly known as the Corsicana Bowl, is in its third year and stands as one of only four NCAA Division II sanctioned bowl games. The two participating teams consist of schools competing in the Lone Star Conference (LSC), Mid-America Intercollegiate Athletics Association (MIAA) and/or the Great American Conference (GAC).

The Muleriders won seven of their first eight games and capped off the regular season by reclaiming the Battle of the Timberlands Trophy last Saturday. At stake is the program’s ninth nine-win season all-time, first since 2016, and the first postseason victory since a 41-31 win over the Mexican All-Stars in the 1990 Aztec Bowl.

The Greyhounds won seven games for the third time in the last four years.

The matchup will be the first between SAU and Eastern New Mexico on the gridiron.