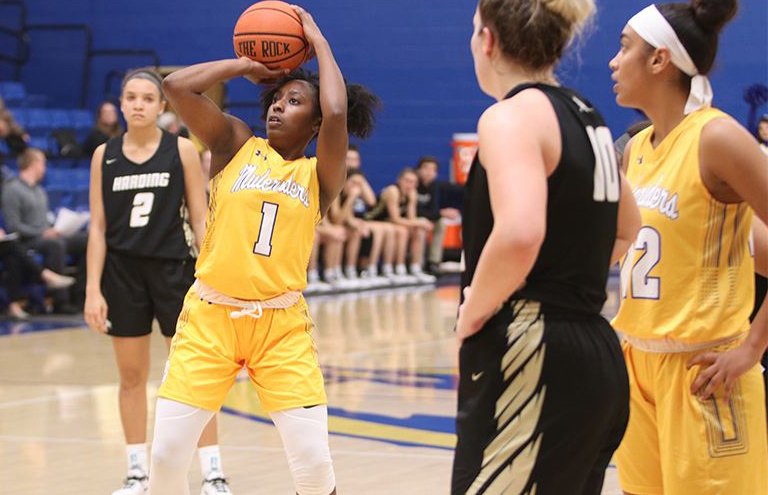 Five Southern Arkansas Lady Muleriders scored 10 or more points in their last outing and second-year head coach Adam Collins has the team off to one of its best starts in recent years.

Collins came to SAU from the University of Charleston, where after his second season the team earned an at-large berth to the NCAA Tournament after posting a 19-8 regular season record.

Against Missouri S&T earlier this week, the Lady Muleriders scored the most points of the Collins era as they shot 46.4 percent from the field – including 28 points in the first quarter that led to a 91-74 victory.

Diamond Morris led the offensive effort for the second consecutive game, scoring 20 points on 7-14 shooting from the field, including 3-6 from three-point range, and going 3-4 from the free throw line. The freshman also recorded a team-high four steals in only 19 minutes on the floor.

Ariana Guinn scored 17 points on 8-12 shooting from the floor; Kisi Young scored 15 on 6-10 shooting and 3-3 on free throws, as well as grabbing eight rebounds; and, Erin Brinkley scored 10 points on 3-5 shooting, all attempts coming from behind the three-point arc.

Brinkley was 3-of-4 from three-point range.

Maggie Evans, along with Morris, recorded four steals. The junior from Conway also scored two points, grabbed four rebounds and dished out three assists in her 17 minutes off the bench.

Fatarah Kinnard, who was unable to score in this contest, grabbed six rebounds and assisted a team-high five times on the night.

The Lady Muleriders’ 91 points were the most they have scored since Feb. 20, 2018 in an overtime win against Arkansas-Monticello; their most at home since they scored 98 against Crowley’s Ridge on Dec. 30, 2017; and their most at home against a Division II opponent since Dec. 17, 2015, when they scored 104 against LeMoyne-Owen.

The Lady Muleriders improved to 5-1 on the season and are back in action on Saturday, Dec. 7 in Arkadelphia against Ouachita Baptist.