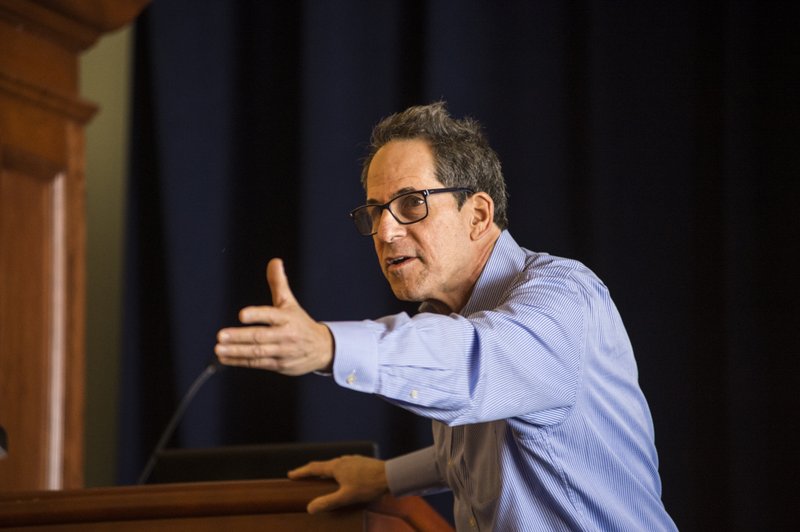 All the way from the rolling hills of northern New Jersey, wealth management and investment expert Jeffrey S. Weiss this week was a special guest of Southern Arkansas University and Farmers Bank & Trust.

The former chief technical analyst for Lehman Brothers, PaineWebber, and UBS served as a temporary advisor and mentor of sorts as an executive in residence at the Rankin College of Business. For days, the 45-year investor interacted with students, faculty, and professionals alike to offer tips and principles discovered and baked into his investment habits.

A firm and total believer in a stringently simplistic approach to stocks and finance, the charismatic speaker and author of “Relationship Investing: Stock Market Therapy For Your Money” capped off his multi-day visit to Magnolia with an open community forum and Q&A session at SAU’s Reynolds Center. The hour-long presentation broached topics ranging from the author’s own personal life and obsession with rare air filtration systems, his worrisome nature, and early interest in the market, to his almost outsider approach and “pre-historic” technical views on investing rather than the fundamental views held by most Ivy League colleges and the Wall Street community at large.

“In the stock market, I take a completely different view than most folks,” said Weiss. “I don’t look at what I’ve done right -- I look at what can go wrong.”

The investor relayed how using personal life experience and applying common sense approaches to the market seems easy, but when money and pitfalls are involved, so many are blinded by potential and not the actual substance of the matter.

“Anything you do in life, you’re never going to learn from something that goes that right,” he said. “It’s only when something goes wrong that we can really learn from it.”

Weiss came into the world of stocks literally with a childlike, simplistic view on investing. He was not educated by what trends were en vogue in his 1970s youth -- or now for that matter -- or what some prestigious university taught him in economics class. No, the Pennsylvania-born, Garden State resident at only 13 began his financial education from logical approaches to stocks learned though his own successes and failures at an early age.

When Weiss made his first investment in 1969 by purchasing five shares of the Mattel Toy company’s stock at $80 per share, he did not know that, right then and there, he was cured of the “illness” known as buying according to price. The “illness” he referred is sometimes looked down upon. Some may say it was unwise that he bought five shares at $80 instead of purchasing 10 times as much of another stock at $8. But he has an answer for that.

“In my business, price has nothing to do with it,” he said. “It’s all just like in life, it’s about potential.”

Weiss uses the technical analytical approach to investing instead of the fundamental view held by the many on Wall Street and top schools of economic thought. Fundamental analysts view risk and market potential by poring over mounds of company data such as growth rate, unemployment rate, cash per share, etc., as well as a company’s earnings and dividends, to prognosticate a stock. They also use similar tactics to attempt to predict the market as a whole based on the economy. But Weiss, a Rutgers University alum, does not care about the reams upon reams of company data or who the executives are, he simply charts the day-by-day, week-by-week, month-to-month, and year-to-year trading of a stock to see the trends in its performance.

Weiss noted that when many fundamental analysts and economists, with their Ivy League degrees and jobs at a super Wall Street firms, shun his method of using six to eight minutes to view stock patterns, he only rebuts that he is using the greatest analyst in the world -- the stock market itself.

He also explained that bear markets lose money for an investor and bull markets make money, so invest accordingly.

“I always tell people, you’re better off owning junk in an upmarket than quality in a down market,” Weiss said.

Risk management and having a plan is another major theme of Weiss’ principles. He thinks that buying a stock on the way down is akin to being in a volatile relationship and using marriage as a tool to try to fix the problems, but only prolongs and bloats them.

“You would never do that in life, but I see it in the stock market all the time,” he said. “People don’t want to admit that they’re wrong.”

Markets affect personal lives. With a good plan and a reasonable personal outlook at what is actually possible, Weiss thinks that there is potential to have seven out of ten investments simultaneously on the upswing, but also knows that people can lose fortunes, even in bull markets.

But with his technical background, he believes whole hardheartedly that the market can be predicted, based on trends, even in the face of critics who claim it’s all a game of chance or there are no patterns to examine.