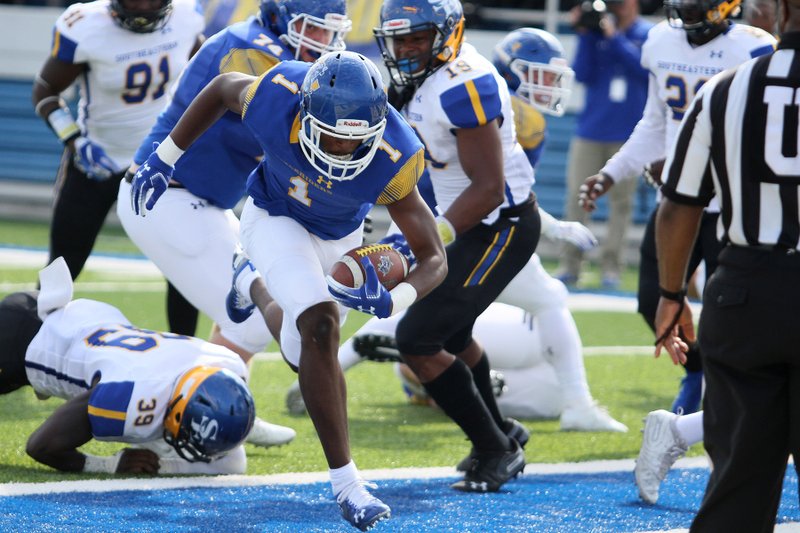 SAU fell last week to Ouachita Baptist 38-21. The Muleriders will look to rebound for a win this weekend against Henderson State. - Photo by Southern Arkansas University

Southern Arkansas’ playoff and conference championship opportunities were hurt last weekend, but the Muleriders can possibly still play in a postseason game.

However, they will have to defeat Henderson State on the road Saturday and take care of UAM at home the following weekend.

Nothing is guaranteed, but two GAC teams have moved on to the NCAA Division II playoffs in recent years. The next highest finishing team in the league has been invited to the annual Live United Bowl in Texarkana, where SAU has played twice.

On Saturday, OBU will host UAM; Harding travels to Southeastern Oklahoma; and SAU will visit Henderson State. On the last weekend, the Reddies and Tigers will meet in a big rivalry game; Harding visits Arkansas Tech; and the Muleriders will host UAM.

The Tigers lead the GAC standing with a perfect 9-0 record, followed by Harding and Henderson State, who are both 8-1. SAU slipped to third with its 7-2 mark.

“They got on us quick,” said Mulerider head coach Bill Keopple. “It’s disappointing. They are good in the backfield, talented up front and a well-coached football team.”

The unbeaten Tigers rushed for 314 yards and four touchdowns, as well as throwing a 24-yard touchdown pass.

“It’s a credit to them. They were a tough football team to stop,” said Keopple. “It’s disheartening. The good news is we were in the game for a while and the bad news is we didn’t win it.”

The Tigers scored three unanswered touchdowns off long drives to go up 21-0. OBU took the game’s first possession and marched 75 yards in 13 plays as Brown crossed the goal line from the 1. Gabe Goodman added the PAT to make it 7-0 at the 9:07 mark.

After SAU punted the ball to the 1, the Tigers drove 99 yards in eight plays which was highlighted by a 42-yard touchdown run by Brown to make it 14-0. Early in the second period, OBU needed only six plays to travel 74 yards for another score.

Quarterback Brayden Brazeal threw a 35-yard strike to Allie Freeman at the 13:39 mark to make it 21-0.

With 20 seconds to play in the first half, SAU scored on a 19-yard TD pass from Hayden Mallory to Jared Lancaster. Austin Wilkerson’s PAT made it 21-7.

Early in the second half, the Muleriders closed the gap to 21-14 on a 9-yard touchdown run by Kor’Davion Washington. The Tigers responded as Brown got another TD from the 3 to make it 28-14.

Early in the final period, SAU got a 3-yard touchdown run by SirCharles Perkins to make it 28-21, but the Tigers’ Goodman kicked a 39-yard field goal to push the score to 31-21.

The Tigers’ final score came on a 26-yard touchdown run by Shun’cee Thomas with 6:47 to play.