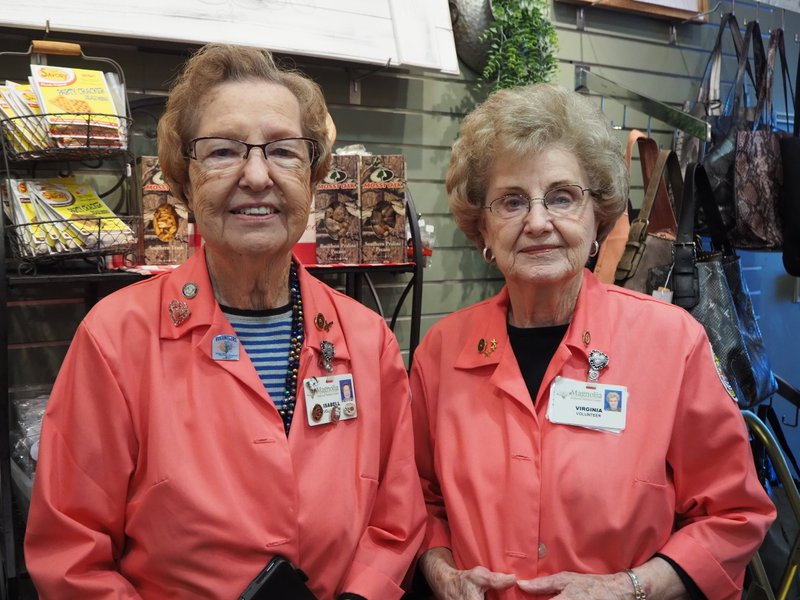 Isabell Ford is 93-years-old, but she still stays active by serving on the Auxiliary at Magnolia Regional Medical Center.

Despite her age and some leg pain, she shows up each Tuesday from 8 to 11 a.m. to sit at the front desk and direct people to different places in the hospital. She’s been doing it about 25 years.

“It makes me feel good to get out and be with other people,” Ford said.

One of her many pins she has for years of services says, “volunteers make the world a better place.” She laughs as it is examined because she said she so many adornments she can’t wear them all.

Ford used to work for the hospital for about 20 years as a ward clerk before she retired. She remembers her job mostly as helping with new Medicare card requests to departments and the nurses would check and make sure the orders were right.

But when she retired from the hospital, she didn’t really feel like she knew what to do.

“When I first retired, I was bored to death and I decided to do this,” she said. “You get to help a lot of people when you do this. Some don’t know their ways to the lab. I even recently went to the business office outside.”

Walking a short distance is something that is good for Ford, she said. She said she also enjoys the benefits of being a hospital volunteer such as a free TB Test and a flu shot.

Ford said she grew up in Village and graduated from high school in 1943. She considered being a teacher but instead married Melroy Ford and they had three children; Ron Ford, Beth Ross and Steve Ford. She attends Central Baptist Church.

Before coming to the hospital to be a ward clerk, Ford spent between 12 and 15 years being a cosmetologist, but that was hard work standing up all day and someone suggested she apply for a sit-down job at the hospital. She said she will always remember her time as ward clerk with fondness even though it was always busy.

Her job was then was on Second South Obstetrics and Surgery floor and the other floor was First North.

Jenni Daniel, director of Volunteer Services said the Auxiliary began in April of 1958 and was organized by Mildred Ruff, wife of Dr. Ruff. She and other wives of doctors organized the group to earn money for the hospital. They sold coffee, sandwiches donated by a church, candy, cigarettes and package cheese crisps back before there was a cafeteria at the hospital.

“Coffee shops were much needed for the people who had to stay close to the hospital,” Daniel said.

The Auxiliary serves in various positions throughout the facility including the information desk, clinic registrations, Gift Shop, and more. Magnolia is one of 54 Auxiliaries in the state of Arkansas and it belongs in the Arkansas Auxiliary Association.

In 2018, the volunteers in Magnolia donated 6,458 hours and made more than $20,000 in donations, Daniel said. There are 38 active volunteers and all work at least three hours a week, mostly work longer than that.

The volunteers make their money to give back to the hospital by earnings from the Gift Shop, twice-yearly uniform sales, a Merry Christmas Market out at Magnolia Hospital’s Lifesmart Center. At this fundraiser, the hospital volunteers serve refreshments to the community and allow people to taste various party dips and mixes available year-round in the gift shop. Many people buy these for upcoming seasonal parties.

Another fundraiser is the Second Treasure Silent Auction where volunteers bring items from their homes and they are auctioned off in the board room.

In addition, the auxiliary pays for a portrait of people who have worked at the hospital for twenty years or longer to be displayed in the hallway.

Virginia Smith, 88, has been working on volunteering for the past 23 years. She had previously worked in the lab as a receptionist before retiring and coming on at a hospital volunteer.

“I had some free time and I just wanted to be helpful and help somebody,” Smith said.

Now she works at the Emergency desk and helps those who are often in bad physical and emotional shape.

“It gets hectic at times especially in the winter time when there is a lot of flu, colds and upset stomachs,” she said. “It’s not stressful for me but it is for the ward clerks.”

She said she has been a member of the College View Baptist Church since the 70s. She said she feels good most of the time and looks forward to her time volunteering at the hospital. The only limitation she said she has is stooping and bending because of her back.

“I enjoy it and enjoy still seeing a lot of people I knew when I worked,” she said. “I think it’s wonderful and I’m glad to be a part of it.”