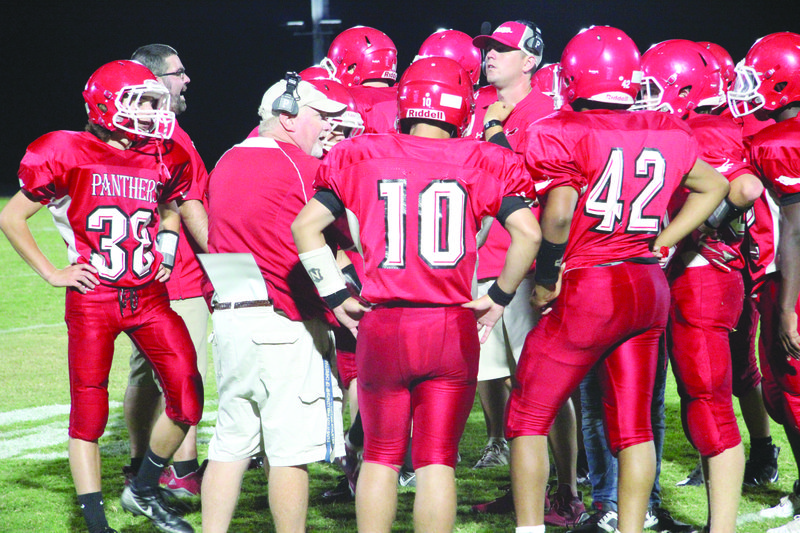 Magnolia Cubs head coach John Rich talks with his freshmen teams during a time out. The freshmen recently completed a perfect 9-0 season and 6-0 in district play. - Photo by Chris Gilliam

Magnolia has had some unbeaten freshmen teams in the past, but not many measure up to the 2019 squad.

“These guys have had a wonderful season. I can’t say enough positive things about them and what they have been able to accomplish,” said head coach John Rich.

His freshmen Panthers (9-0) capped off a perfect season last week after pounding De Queen 50-14, while the 8th graders finished 4-3-1 following a scoreless tie with the Leopards.

“Our freshman had a tremendous year with victories over El Dorado and Nashville. We were down against Hot Springs and the kids found a way to pull that one out,” said Rich.

According to Rich, this year’s group was special because they never showed any worry.

“They went out each week, played as hard as they could and looked to be having fun,” he explained.

Rich said there’s no way he could single out the talented athletes on the 2019 squad.

“Sure we had some players who were remarkable, but this team as a whole was balanced,” said Rich. “You can’t lay all this on one or two people. The was definitely a team effort.”

Rich agreed there were talent athletes in the backfield, offensive line, quarterback, receiver and other positions.

“Our defense stepped up so many times this season and shut people down,” he said. “Everyone knows the offense put a lot of points on the board.”

The coach said special team’s play is what had him excited.

“When Blake Barker kicked the ball off, we had 10 running down the field and wearing people out. Opponents very seldom had the ball near mid-field after a kickoff,” he explained. “We didn’t punt very often, but when we did, it was very high and long.”

Rich also agreed that going unbeaten in any league is special.

He recalled that his brother, former Cubs’ coach Robert Johnson, had a pair of unbeaten Magnolia freshmen teams that included players such as Marcus Rucker, Jeremy Hambrice, Doug Carter and Smith Bonds.

A 2011 squad with players such as Demetrion Jones, Immanuel Turner, Devaunte Robinson, Zac Harrington and others also had a perfect 9-0 run.

“I want to say the support this Cub program received from the parents was phenomenal. They took great care of our kids (8th & 9th grade) with pregame meals. Every week, we could count on both mommas and daddys being their for these athletes. That’s something that made me proud,” said Rich. “Every week, whether in or out of town, we had a good following.”

Rich also thanked Panther head coach Mark King for inviting his freshmen to the varsity squad for practice and games.

“That was big for these kids. They got to eat pregame meals with them, hang out in the dressing room and dressed on the sideline,” he said. “They were appreciative as 35 freshmen were moved up for the final two games.