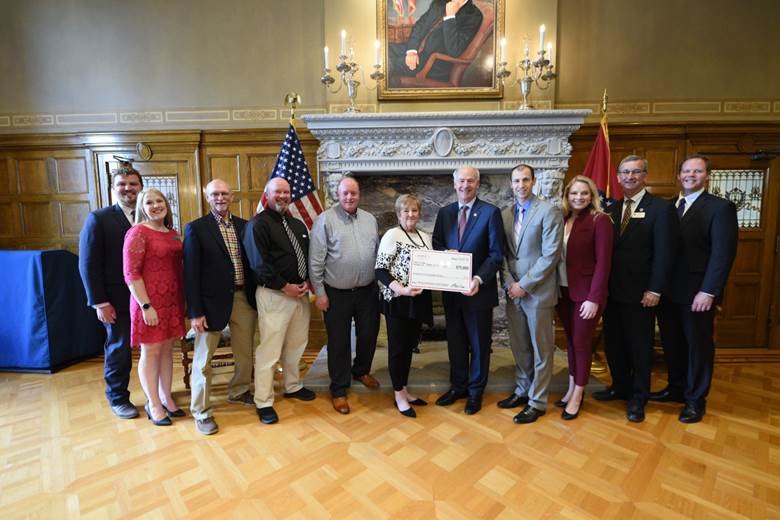 The Town of Emerson on Oct. 24 was awarded a $75,000 Arkansas Economic Development Commission (AEDC) Rural Services Division by Gov. Asa Hutchinson. A ceremony for the grant was held at the Arkansas State Capitol. In total, some $1.35 million was awarded to 49 communities throughout Arkansas.

The funds awarded to Emerson will be used to renovate the outside of the town’s nutrition center located along Hwy. 79. In total, the building will receive new windows, a new roof, and get new siding, according to Emerson City Hall.

The structure is hoped to become a community center down the line. The building currently serves as a center for meals to seniors three days per week.

A total of $318,505 was awarded to 28 cities and counties under the Rural Community Grant Program. Applicants from incorporated towns of less than 3,000 in population and unincorporated rural areas are eligible for up to $15,000 in matching funds under the program for community development and fire protection projects.

A total of $23,657.55 was awarded to six counties under the County Fair Building Grant Program. Under the program, county fairs located in counties with a population of less than 55,000 are eligible for up to $4,000 per fiscal year for construction, renovation or general improvements of buildings or purchase of items shown to directly improve the building or the services that the county fair association may provide.

A total of $997,115.16 was awarded to 15 communities and counties under the Rural Services Block Grant program to fund new construction or renovation of community centers, fire stations, or multi-purpose buildings, and the purchase of fire trucks (pumper, tanker, brush or certain service trucks) and fire-fighting equipment. Grants are up to $75,000, with a required match of 10 percent that may be comprised of in-kind labor, in-kind materials or cash. Only incorporated towns and rural communities with a population of less than 3,000 with at least 51 percent in the low- to moderate-income category are eligible.