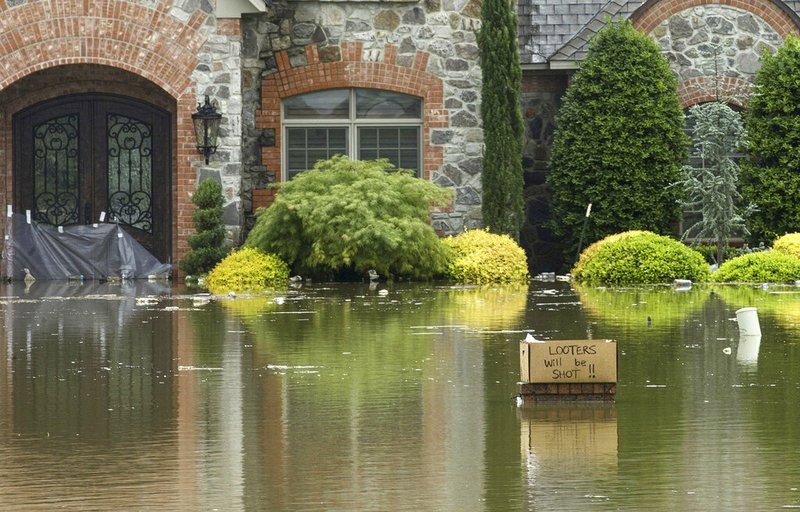 A sign reading "Looters will be shot!!" sits in front of a flooded home on Turtle Bay, Wednesday, May 29, 2019, in Fort Smith, Ark. Forecasters say heavy rainfall is intensifying flooding in already saturated areas along the Oklahoma-Arkansas border. (Ben Goff/The Northwest Arkansas Democrat-Gazette via AP)

In Fort Smith, Arkansas' second-largest city, officials expected hundreds of homes to flood , while in nearby Van Buren, officials warned that a levee protecting a mostly rural area was "showing signs of significant leakage and deterioration." And across the border in Oklahoma's Muskogee County, the conditions have already prompted the evacuations of more than 2,400 people and flooded nearly 1,100 homes, according to the local emergency management department.

Arkansas Gov. Asa Hutchinson said Wednesday that more than 400 homes have been voluntarily evacuated because of the flooding. The Republican said he directed another $250,000 in state funds toward the flood response and requested federal assistance from the Trump administration.

At least one death in Arkansas has been blamed on the flooding.

"This is a flood of historic magnitude. It surpasses all Arkansas River flooding in our recorded history," Hutchinson said Wednesday at a news conference with state emergency officials. "That should be enough to get everybody's attention."

The rush of water was hitting Arkansas as the Army Corps of Engineers releases water from a hydroelectric dam northwest of Tulsa, Oklahoma, to help drain the swollen Keystone Lake reservoir. The reservoir drains a watershed of more than 22,000 square miles in areas of northeastern Oklahoma and southeastern Kansas that have been hit by heavy rain.

The Corps said Wednesday that the releases would be reduced by Saturday to 150,000 cubic feet per second. Officials said that measure would help the floodwaters begin to recede but that it would take days, if not weeks.