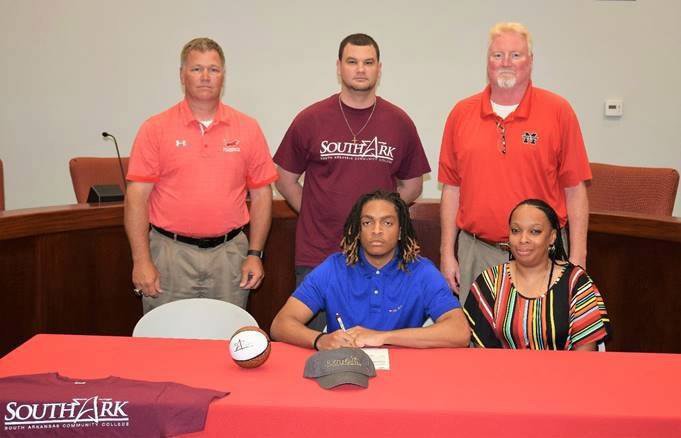 Senior Markeveon Strickland, seated with his mother Kimberly Brown, signed a junior college letter-of-intent to play with the South Arkansas (SouthArk) Community College Stars in El Dorado. Also pictured are (from left) SouthArk head coach Nate Davis, Magnolia head coach Dyun Long and assistant coach Brett Miller. Advice to playing sports and keeping your grades up, Strickland said, “Embrace the moment. Work hard at both. There’s no need of having one with the other.”

“I’m thankful to God. This is something I prayed about. I’m excited and grateful to Coach (Nate) Davis, because he saw something in me that lots of other people didn’t see,” said Markeveon Strickland.

Strickland’s overall statistics were not as impressive as some of his teammates, but coaches agree he was the one who won several big games this season.

It was Strickland’s play in the state finals that helped the Panthers overcome Little Rock Mills in overtime and win the Class 4A State Championship.

“His stats were full across the board. As a father myself, you couldn’t ask for a better son than this young man right here,” said head basketball coach Dyun Long.

Strickland will not only carry his athletic skills to the El Dorado junior college, but also a 3.40 grade point average.

In giving advice on juggling athletic and academics, Strickland said, “Embrace the moment.”

“You have to work hard at both. There’s no need of having one with the other,” he said.

The SouthArk men’s program will be headed up by Davis, who was the head boys’ coach at Hermitage.

“It’s been almost 30 years since we’ve had college basketball in the area and the community is excited. There are lot of talented South Arkansas kids who get overlooked and this is a great opportunity for them.”

Regarding Strickland, Davis said a Magnolia assistant baseball coach got in touch with Long, who told him he might want to considering looking at the Panther.

Davis said he feels the guard is going to be a great fit in his program.

“He has the agility to be a good player and mentally, he has capable of being that coach on the floor,” explained Davis.

SouthArk had earlier announced that men’s and women’s intercollegiate basketball programs would tip off for the first time this fall at SouthArk, and the college is pursuing acceptance into the National Junior College Athletic Association.

SouthArk applied for acceptance into NJCAA Division II, which allows the school to provide college scholarships to athletes.

Davis recently said, “I’m truly blessed to be given the opportunity to not only lead, but build, the men’s basketball program here at South Arkansas Community College.” “There is so much talent in the area, and now we will be able not only to showcase these student-athletes on the court, but also help further their college education as well. I sincerely believe that with the support of our community, this will become something very special.”

Magnolia Athletic Director Marvin Lindsey Jr. echoed some familiar words when one of the school’s athletes sign a letter-of-intent.

“This is a very special day for our athletic program, because we have another one of our athletes signing to further his education in college through athletics,” said Lindsey.

He said Strickland has been a big part of the Magnolia basketball program since junior high.

“I started watching him then and knew he would be special. Not only that, he’s also a hard worker in the classroom,” added Lindsey, referring to his grade point average.

According to Lindsey, Strickland hit a lot of big shots during the course of the season for the Panthers.

“When you work hard, good things happen. We are so proud that’s the case for Markeveon,” said the athletic director, telling him, “I’m glad you’re close to home so we can come watch you play.”

Lindsey again thanked Strickland for his contributions to Magnolia athletics.