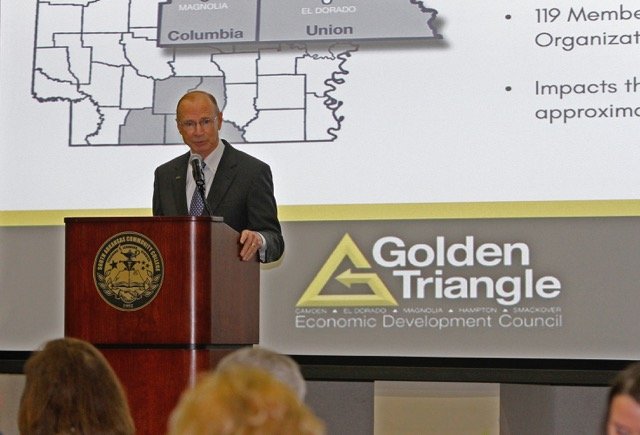 Dr. David Rankin, chairman of the Golden Triangle Economic Development Council, speaks at the organization’s May 7 dinner in El Dorado.

Preston was appointed to the AEDC in 2015; since then, he has helped to recruit over 300 companies to Arkansas, leading to investments of $8.06 billion and the creation of over 16,000 new jobs.

“There are plenty of jobs here, and there will be more jobs coming. We’ve just got to link them together and make sure those people who are wanting the jobs understand that there are good-paying jobs,” Preston said.

Preston noted that in Arkansas, unemployment has sat at 3.6 percent for 32 months; 4 percent is considered “full employment.” He highlighted the strong defense and timber industries, which help drive the Golden Triangle economy, along with oil, tourism and chemical processing.

“People are starting to recognize the brand of Arkansas. We’re overcoming those perception issues,” Preston said. “We’re on the map.”

Preston said he has traveled with Gov. Asa Hutchinson around the world as part of his business recruitment efforts. This week, he and Hutchinson will travel to New York City for a press tour, where they will tout Arkansas’ economic growth.

Going forward, Preston said Arkansas faces several challenges. He said that while CNBC lists the state as number one in cost of doing business, Arkansas rates number 40 in business-friendliness and number 50 in quality of life.

“Where we stand, frankly, we could do a lot better,” he said. “We all live here, we know what a great place it is … the challenge is getting them to come here and see what we have to offer.”

Another challenge is developing quality sites for new businesses to locate on. He said even if a site sits vacant for months, it is worth it when a new business is able to invest in our area at the drop of a hat.

“We need more sites. We’ve got a lot of land, but we don’t have a lot of good sites that are, as I would say, “shovel-ready,”” Preston said. “That’s something we’re going to have to continue to work on.”

He also said the qualified workforce in the region must be sufficient to meet the needs of any existing businesses so that employers can be assured they will have a workforce should they locate in Arkansas.

“When you get under 6 percent unemployment, it can be hard to find that qualified workforce, Preston said. “Just in the western part of Arkansas … we identified 10,000 vacant positions … and most of the skills they needed were just entry-level.”

In western Arkansas, the AEDC is developing a pilot program called “Future Fit” that will work to address labor participation rates in that part of the state. The national average for labor participation is 61 percent; in Arkansas, that rate is 57 percent. Preston said if Arkansas were able to jump four percentage points to close that gap, up to 50,000 more people would have jobs.

“How do we just get ourselves to the national average,” Preston asked. “I can’t stand up here and say I have the answer … but hopefully somebody out there smarter than me does have the answer and we can get together, collectively, as a group, and get that figured out.”

The state is also working on a new economic development program called the Competitive Community Initiative. Preston said the program outlines a path for communities to be economically competitive with similar areas in other states. 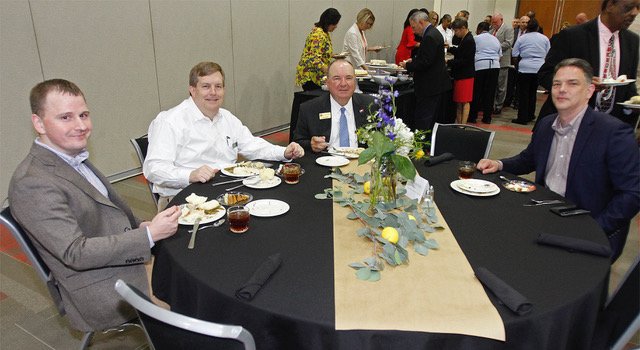 “Fortunately, here in South Arkansas, what you all are doing regionally – you’re reaching beyond city borders, beyond county borders and working as a region – you’ve got a leg up on so many communities that we have in the state,” Preston said.

“What you guys offer in South Arkansas, I wish I could replicate in other parts of the state. Through SAU (Southern Arkansas University), SAU Tech and South Arkansas Community College, I think you’re going in the right direction,” Preston said.

Arkansas is also looking for investors to support opportunity zones in the state. As part of the federal Tax Cuts and Jobs Act of 2017, low-income rural and urban areas that need investment were identified and investors can reap tax benefits should they choose to support the areas.

There is one opportunity zone in El Dorado, at the South Arkansas Regional Airport at Goodwin Field.

Preston touted Hutchinson’s accomplishments, particularly tax cuts that have lowered the tax rate for every level of earner in the state.

“We cut taxes, but we also had a balanced budget and we also put $100 million into our restricted reserve fund,” he said. “So if we do get hit with a downturn in our economy, because we have a stable economy, because we’re diversified, we’re not having to worry about raising taxes on the backs of our employees, our businesses and our taxpayers. … Not a lot of states can say that.”

Preston concluded by saying improving our economic fortunes is an every day job. He said retaining young people is the next big challenge Arkansas will face, as quality of life is one of the most important factors for millennials when choosing where to take a job.