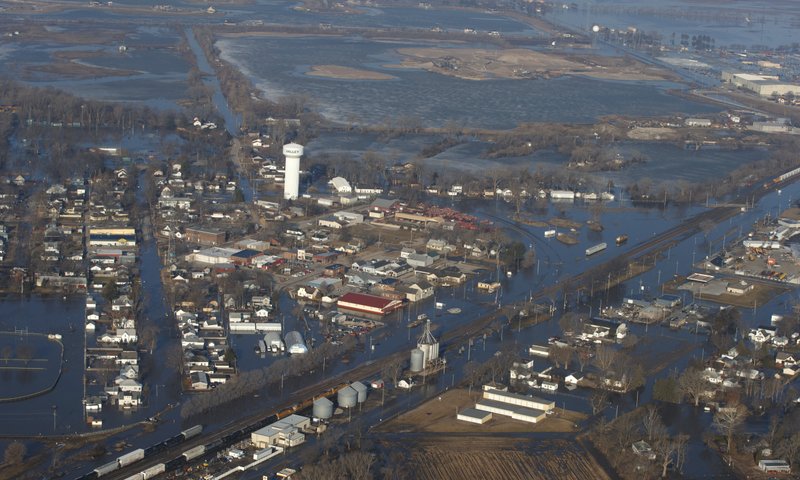 The city of Valley is inundated with floodwaters Sunday, March 17, 2019, in Valley, Neb. Hundreds of people were evacuated from their homes in Nebraska and Iowa as levees succumbed to the rush of water. (Jeff Bundy/Omaha World-Herald via AP)

Many homes in the mostly rural area were inundated with 6 to 7 feet of water, Holt County Emergency Management Director Tom Bullock said. He noted that one couple was rescued in a helicopter.

Residents in parts of southwest Iowa were forced from their homes Sunday because of the flooded river, which has also displaced hundreds of people in Nebraska after a massive late-winter storm hit the Midwest last week.

The Missouri Department of Transportation reports about 100 flood-related road closures, including a stretch of Interstate 29.

The National Weather Service said the river was expected to crest Thursday in St. Joseph, Missouri, at its third highest level on record. Military C-130 planes were evacuated last week from nearby Rosecrans Air National Guard base.

Gallery: Flooding in Nebraska and Iowa

Heavy rain falling atop frozen ground along with snowmelt have led to dangerously high water in creeks and rivers across several Midwestern states, with the Missouri River hitting record-high levels in many areas.

At least two deaths were blamed on flooding, and two other men have been missing for days.

Hundreds of people remained out of their homes in Nebraska, where floodwaters reached record levels at 17 locations. Although river depths were starting to level off in Nebraska on Sunday, the water was so high in other areas that serious flooding was expected for several days.

In southwest Iowa, the Missouri River reached a level in Fremont County that was 2 feet above a record set in 2011. People in the small towns of Bartlett and Thurman were being evacuated as levees were breached and overtopped.

"This wasn't a gradual rise," County Emergency Management Director Mike Crecelius said. "It's flowing fast and it's open country — there's nothing there to slow it down."

Nearly 2,000 people have been evacuated at eight Iowa locations since flooding began late last week, said Lucinda Parker of Iowa Homeland Security & Emergency Management. Most were staying with friends or family, though shelters were also available.