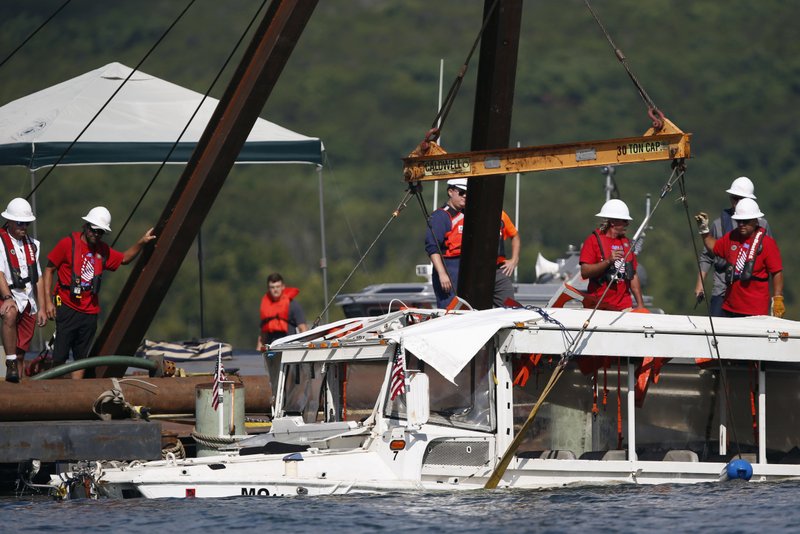 FILE - In this July 23, 2018 file photo, a duck boat that sank during a thunderstorm on July 19, killing 17 people is retrieved on Table Rock Lake in Branson, Mo. Records show a water pump had been replaced with a less powerful system in the tourist duck boat that sank in a Missouri lake. The original Higgins pump, which is capable of removing as much as 250 gallons of water per minute from the bottom of a boat, was replaced with two less powerful electric pumps. (Nathan Papes /The Springfield News-Leader via AP, File)

KANSAS CITY, Mo. -- The owner of a tourist boat that sank in a Missouri lake and killed 17 people has reached a settlement with relatives of two brothers who were among the victims.

The brothers were among nine members of an Indiana family who died when the duck boat sank in July on Table Rock Lake near Branson.

Others who died included two couples from Missouri, an Illinois woman, an Arkansas father and son, and a retired pastor who was the boat's operator on land. Several lawsuits against Ripley and other entities are pending in federal and state court. A spokeswoman for Ripley Entertainment says the company is continuing mediation with victims of the accident.

The lawsuits allege Ripley Entertainment launched the boat despite warnings of severe weather near the lake.