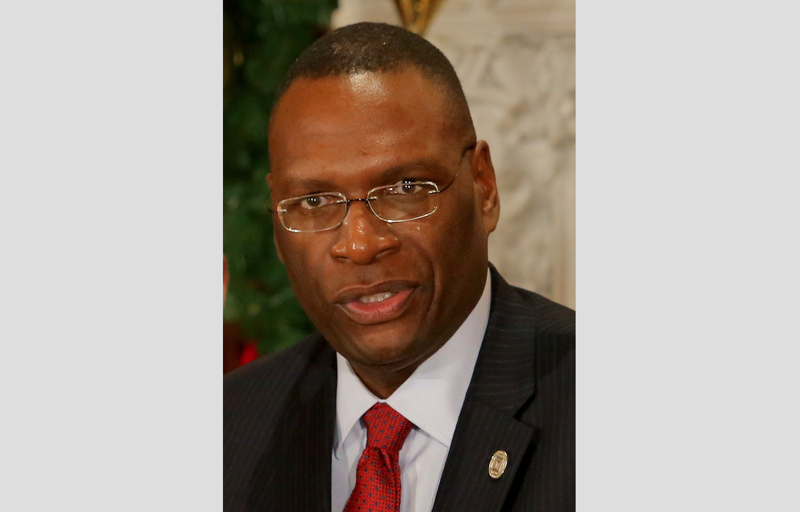 Days after scheduling and then canceling a board meeting aimed at seeking a credit line of up to an additional $2 million, Henderson State University announced a hiring freeze and other spending cuts as student debt has spiraled.

The university in Arkadelphia also backed out on a separate line of credit of up to $1 million, which its board of trustees had voted in May to obtain from a bank, after the school's president, Glen Jones Jr., said he learned that the public university needed state approval for such a loan.

Gov. Asa Hutchinson expects to meet "at some point" with Jones about the financial problems, J.R. Davis, a spokesman for the governor, said Tuesday.

The Arkansas Department of Finance and Administration also plans to brief the governor on the school's budgetary issues this week, Davis said. Once the governor's office has more information, it will have additional comment, Davis said.

In an email to the faculty and staff Friday, Jones advised: "Today I became aware of a state law which requires an approval process with the state before the university can do private borrowing. In light of this, I have determined we will not close on the line of credit that was approved by the Board of Trustees in May and we will not seek an additional line of credit on Monday. We are exploring other financial solutions to manage cash flows between academic terms."

"Finance expects that there will be a deficit for this fiscal year," she said, referring to the school's finance department. "The amount is not currently known due to the invoices that are being processed this week to close out the end of the fiscal year."

Hall shared a budget draft that was distributed to the board of trustees in May but said it is not current because it "does not reflect accounts to date." That draft showed a surplus of $4,825 for the coming fiscal year and a surplus of $26,653 for the current one.

Hall said the school's operating cash on hand as of Tuesday was $1,737,781.28. She also referred to that as "reserves" and said there is no separate reserve fund, or savings that universities often keep for emergencies. The budget draft also reflects no reserve fund for either the coming or the current fiscal year.

In an email to the staff and faculty Monday afternoon, Jones sought to reassure nervous employees.

"All employee and candidate reimbursements have been processed today and checks will be available" Tuesday, he wrote.

Hall said in an email interview that the university had "slowed reimbursements while revenue from spring and summer Pell grants was received."

Jones told employees that the university was "exploring financial solutions other than a bank line of credit to manage our cash flows between academic terms."

"We are considering requesting an interest-free loan from the state's Budget Stabilization Trust Fund," Jones wrote.

But Scott Hardin, spokesman for the Finance and Administration Department, said, "Any funds provided via the Budget Stabilization [Trust] Fund to Henderson would be an advance on the regular state funding provided to the university."

Such an advance "is the only mechanism in place that could be considered any form of a [state] loan for higher-education institutions," Hardin said.

Hardin said no higher-education institution in the state has obtained an advance from that fund in the past five years.

In 2008, the Arkansas Democrat-Gazette reported that the University of Central Arkansas obtained a $3.5 million advance on state funds in addition to a $6 million line of credit. In 2009, UCA obtained a separate advance for $3.7 million, Hardin said.

In the Monday campus-wide email, Jones announced "an immediate hiring freeze, a hold on planned restoration of supplies and services funding, and the elimination of all non-essential travel."

Jones said the "primary cause" of Henderson's financial challenges is about $4.5 million in unpaid student accounts incurred this fiscal year.

"We are working to collect these payments and to reduce the amount of debt that students can carry with the university from the current amount of $4,800 to a lower threshold of $2,500 per student account," Jones wrote.

He added: "We have worked to help our students, almost 90 percent of whom qualify for financial aid, and their families. In doing so, we went too far in allowing higher account balances, and we need to swing the pendulum closer to the middle. We are committed to balancing the needs of our students while also ensuring business continuity." 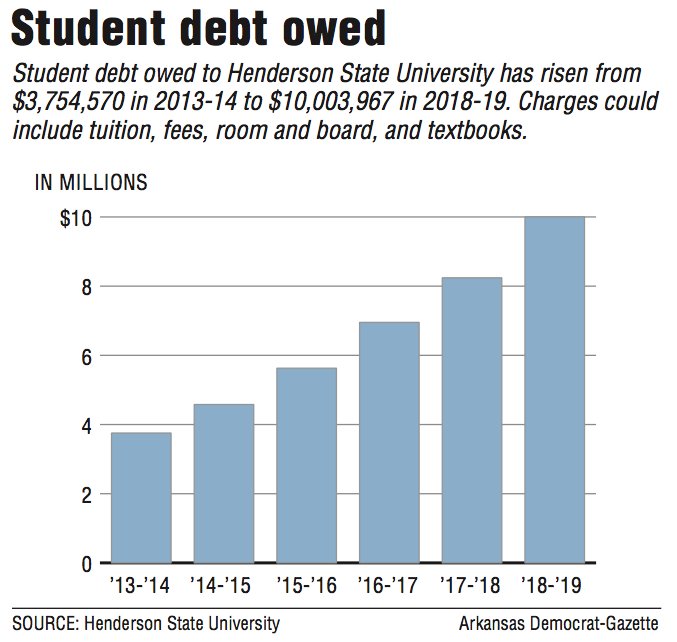 Further, an email written by Henderson Controller Lecia Franklin on May 29 and since obtained by the Arkansas Democrat-Gazette under the Arkansas Freedom of Information Act says Henderson "has pledged future student tuition and fees to repay $5,740,000 in refunding bonds issued in 2011 and 2015 to refund capital improvement bonds for various capital projects."

Other financial challenges cited by Jones included "difficulties accessing funds that are due to the university using the current financial aid system as well as unplanned and unbudgeted deferred maintenance expenditures."

In an email sent before the board of trustees' since-canceled teleconference meeting Monday, Jones said the university had encountered "significant maintenance projects" this year, including improvements to two residence halls.

In May, Jones said, the board approved $16 million for an energy cost-savings capital project. Jones had planned to request increasing that sum to $16,798,552.95 to accommodate for the addition of two buildings on campus to a chilled water loop.

But in his Friday email to the campus canceling the Monday meeting, Jones said he had decided it would be best not to add the other two buildings to the chilled water loop at this time.

Maintenance and student debt are far from the school's only major expenses. In addition to utilities, the university owed food vendor Sodexo $843,854.21 as of June 17, Hall said. That was included in the budget draft, she said.

Henderson is not the first university to seek a line a credit from a private institution without state permission, in violation of a 1987 state law.

A spokesman for the University of Arkansas System at the time said the failure to seek approval "was an oversight" and that none of the lines of credit still existed. About that same time, a UCA executive said the Conway university had held lines of credit the past three years.