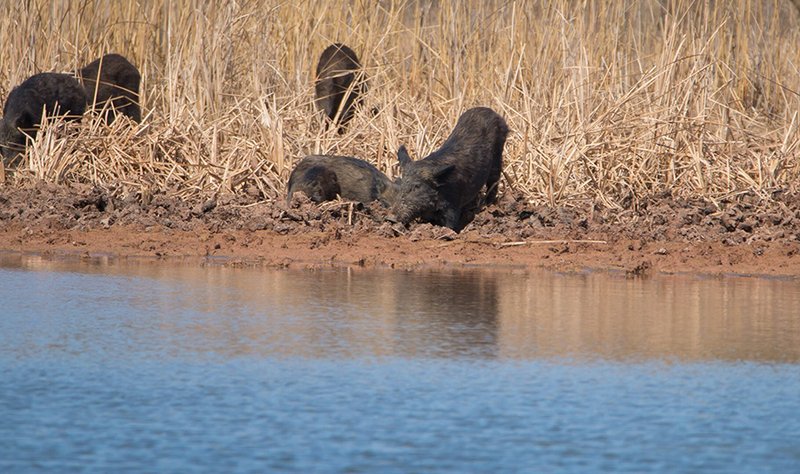 Feral Hogs root and destroy land next to a water source. - Photo by USDA

LITTLE ROCK -- The USDA announced recently it is offering $75 million in funding for the eradication and control of feral swine through the Feral Swine Eradication and Control Pilot Program (FSCP) in a joint effort with USDA’s Natural Resources Conservation Service (NRCS) and USDA’s Animal and Plant Health Inspection Service (APHIS). The 2018 Farm Bill included this new pilot program to help address the threat that feral swine pose to agriculture, ecosystems and human and animal health.

NRCS will direct up to $33.75 million of the allocated FSCP funds toward partnership efforts to work with landowners in identified pilot projects in targeted areas. Applications are being accepted through Aug. 19, 2019, for partners to carry out activities as part of these pilot projects in select areas of Arkansas. APHIS has determined that Arkansas is one of several states among the highest feral swine population densities and associated damages in the country.

“NRCS state conservationists and APHIS state directors, in coordination with state technical committees, have identified pilot projects that can be carried out within these target states,” NRCS Chief Matthew Lohr said. “Our agencies stand ready to work with partners at the state and local levels to respond to the threat of feral swine.”

Pilot projects will consist broadly of three coordinated components: 1) feral swine removal by APHIS; 2) restoration efforts supported by NRCS; and 3) assistance to producers for feral swine control provided through partnership agreements with non-federal partners. Projects can be one to three years in duration.

“Feral swine rooting, trampling, and wallowing activity damages crops and grassland, increases erosion along waterways and in wetlands, and can limit water infiltration and nutrient cycling,” said Mike Sullivan, Arkansas NRCS state conservationist. “This call for proposals is intended for non-federal partners to provide landowner assistance for on-farm trapping and provide related services as part of the pilot projects.”

NRCS is now accepting proposals from non-federal partners. NRCS will provide funding for these services through partnership agreements. The funding limit for a single award is $1.5 million. Awardees will be required to provide at least 25 percent of the partnership agreement budget as a match to NRCS funding.

“The projects selected for funding will allow APHIS and NRCS to collectively reduce the damage and disease caused by one of the most destructive and formidable invasive species in the United States,” said APHIS Administrator Kevin Shea. “Overall, this pilot program builds upon and expands work already underway by APHIS’ National Feral Swine Damage Management Program to both manage feral swine and eliminate populations in partnership with local government, the private sector, industry and academia.”

Additional information on the complete funding announcement and about specific pilot projects, including target areas and the roles for which partner assistance is being requested, can be found on the FSCP webpage.

Applications must be submitted through Grants.gov by 5 p.m. Eastern Time on Aug. 19, 2019.