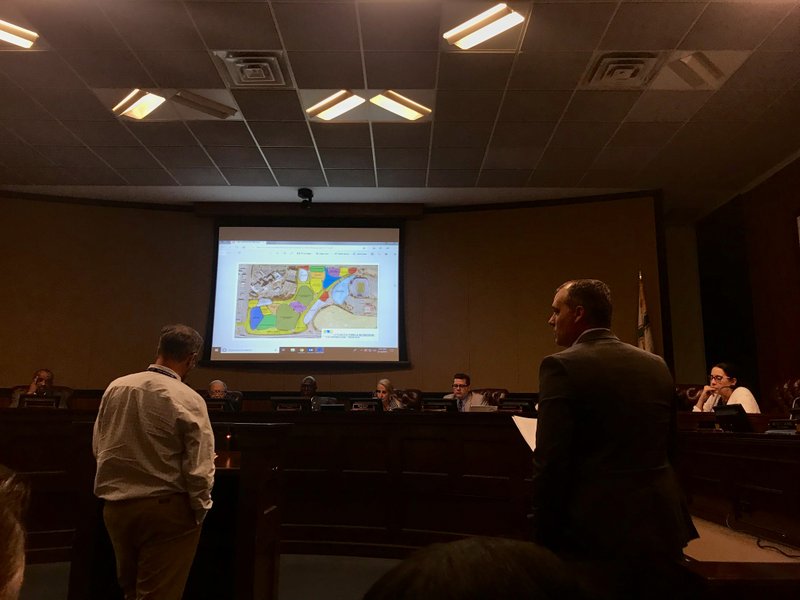 The Little Rock board of directors discusses golf operations on Tuesday.

Based on financial analysis, a study by outside consultants, and the courses' usage and conditions, Little Rock Parks and Recreation Department Director John Eckart recommended that the city "reinvest" in the First Tee and Rebsamen golf courses while repurposing the other two.

Earlier this month, the city board approved nearly $2.1 million in cuts to Little Rock's budget for 2019. The budget amendment included a policy decision to close and repurpose two of the city's four golf courses, which was to be made after analysis by the staff.

The last day of play at Hindman will be June 28, which coincides with the last day of work for employees whose positions were cut. War Memorial's last day will be July 4, to accommodate a scheduled tournament.

"This is an opportunity to reinvest, reimagine and recommit to our city," Scott said.

In 2018, the city spent nearly $2.6 million to support four golf courses that made about $1.4 million in revenue, according to numbers provided by the city. City staff members didn't have any estimates on how much it would cost to put in the new features.

"This is a large idea," parks design manager Leland Couch said. "It's hard to start looking at price tags when we don't even know how many ball fields [to be placed at War Memorial]."

A spokesman for Scott said in an email that the "vision plans" were developed only to help residents "conceptualize what is possible," and that nothing is set in stone.

Scott said a community task force will be put in place to brainstorm recreation options to provide a "great quality of life for youth and our seasoned brethren."

He said there would be opportunities for public input, including a poll on social media and a form on the city's website.

B.J. Wyrick, the Ward 7 city director, said she was disappointed by Scott's decision. She said she felt the study, which said that Hindman should be repurposed partly because of the course's tendency to flood, was unfair.

"By doing this arrangement, we're already saying that this ground is stable enough -- it's not in the floodway, we can add these amenities to it," she said.

Since talk of the possible closure of the two courses began to circulate, golfers attended city board meetings in large numbers to advocate for keeping them open. Tuesday was no different.

Scott didn't announce his acceptance of the recommendations until after the public comment portion of the meeting, but some expressed feelings that the city had already decided.

"I just feel like we've lost so much south of [Interstate] 630 and I live in that area," Paul McDonald said of closing Hindman. "I just feel like, you know, we're not going to play First Tee, and most of the members of my group, we're not going to play Rebsamen either. I'm not sure what to say -- it seems like you have already completely made up your minds to do this."

Ward 2 City Director Ken Richardson offered a similar sentiment that "it seems like the decision's already been made."

Two members of Think Big Little Rock, a group of millennials convened in 2016 to brainstorm strategies to improve the city, spoke in support of repurposing the courses. Turning War Memorial into a central park was among the group's recommendation, co-chairman Amanda Nipper said. Scott was a member of the group when it kicked off.

"Social cohesion increases health outcomes. The relationships that we have with each other in the physical environment have an effect on our daily lives," member Jennifer Hoss said, explaining how such a park could bring people together.

Ward 3 City Director Kathy Webb, whose district includes War Memorial, said she'd like to be involved with the community task force. Lance Hines, who represents Ward 5 on the city board, said he looked forward to working with any interested groups and that he welcomed the change.

To illustrate his point, he quoted a lyric from the song "Once in a Lifetime" by the Talking Heads.

"The lyrics are 'the same as it ever was,'" he said. "I think we could have something that's actually better."