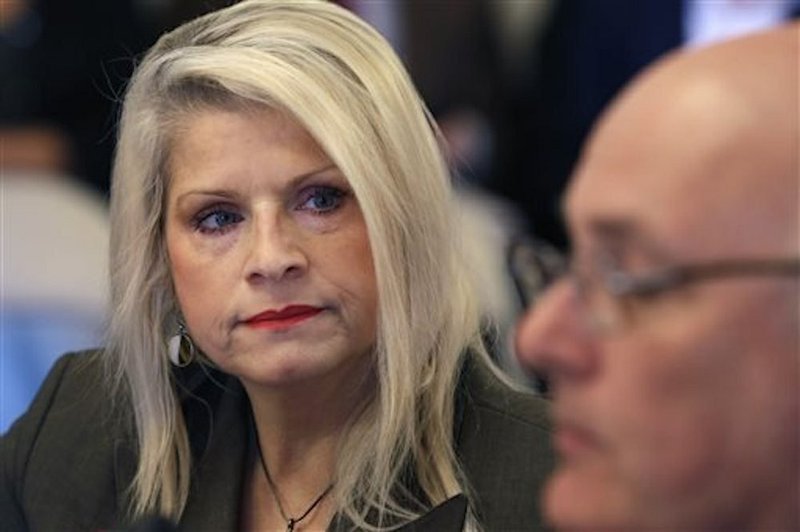 Sen. Linda Collins-Smith, R-Pocahontas, listens to testimony at a meeting of the Senate Committee on Public Health, Welfare, and Labor at the state Capitol in Little Rock on Wednesday, Jan. 28, 2015. -ADG File photo

POCAHONTAS — A Randolph County woman was ordered held without bail Monday after being charged with capital murder in the death of former state Sen. Linda Collins.

Rebecca O’Donnell, 48, of Pocahontas was arrested Friday evening in the death of the ex-senator, who formerly went by the surname Collins-Smith while serving two stints in the Legislature. Collins was first elected in 2011 and left office earlier this year.

O’Donnell appeared in the Randolph County Courthouse in Pocahontas on Monday morning and was formally charged with capital murder, abuse of a corpse and hindering physical evidence.

No plea was entered during the initial appearance, which lasted about 15 minutes.

A news release from prosecuting attorney Henry Boyce said that Collins’ body was found in an “advanced state of decomposition” on June 4, but the statement did not include any additional details regarding the suspected cause of death.

It took investigators at the medical examiners office two days to identify the body using dental records, according to the release.

O’Donnell was ushered into court wearing a checkered black-and-gray jail uniform and a bullet-proof vest and with her hands shackled. She didn't speak, and needed help having her glasses placed on her face to read court documents in front of her.

Tim Loggains, who is identified in O’Donnell’s social media accounts as her boyfriend, sat in the front row. Loggains, who is a proponent of carrying of handguns without a permit in Arkansas, had appeared several times with Collins at the state Capitol this spring to argue for legislation expanding gun rights.

Loggains declined to comment when approached by a reporter after the hearing.

A member of Collins family said they planned to keep private as the case goes though the courts.

O'Donnell was arrested Friday and detained at the Lawrence County jail in Walnut Ridge, approximately 15 miles south of Pocahontas, according to Randolph County Sheriff Kevin Bell.

No charges were immediately filed against O’Donnell, and Sadler said Prosecuting Attorney Henry Boyce’s office would make the decision.

“Obviously, the Arkansas State Police had sufficient legal cause to arrest and detain the suspect,” Sadler said. “And now the prosecuting attorney will make a decision on when to publicly state what those charges will be and how he intends to proceed with the adjudication. He will also set the course for continuing the investigation for special agents of the Arkansas State Police.”

Social media posts on a Facebook page under O’Donnell’s name show several photos of her and the former senator and multiple images of O’Donnell and her boyfriend campaigning for Collins. The profile picture was updated on Monday, six days after Collins' body was found.

The man listed as O'Donnell's boyfriend on social media also posted a photo of himself, O'Donnell and Collins without a caption on June 5.

Posts from May 2018 show O'Donnell and others campaigning on the side of a road for Collins during her last re-election race. Before her body was found, Collins had not posted on social media since May 28, which Collins' former campaign spokesman Ken Yang said on June 4 was strange for her, as she normally posted at least once daily.

According to Arkansas property records, the land where Collins was found is owned by Collins and her former husband, Philip Smith.

Philip Smith retired as a judge in the 3rd Judicial Circuit, which includes Randolph County, in 2017.

The couple separated in 2016 and filed for divorce the following year. The couple married in 1995 and have two adult children.

No initial court date for O’Donnell has been publicly released.

“Setting that date and time, that’s a role of the court,” Sadler said. “At some point the court and the prosecutor will make sure that we have state police personnel there. It may be in the form of highway patrol troopers or other representatives.”

Collins’ funeral was held Saturday at the Sutton Free Will Baptist Church in Pocahontas, according to Fears Family Funeral Home’s obituary.

The family of Linda Collins released a statement late Friday about the arrest.

"This evening our family received news that an arrest was made in connection to the ongoing investigation," the statement said. "We are sickened and upset that someone so close to Linda, would be involved in such a terrible, heartless crime."

"The family is very confident that the Randolph County Sheriff's Department and the Arkansas State Police will continue to work diligently to bring justice to this case. We would like to thank everyone for the continued prayers and thoughts for our family during this difficult time."

Sadler said more information about the homicide -- including Collins' cause of death -- will not be released until the case is turned over to the 3rd Judicial Circuit prosecuting attorney's office.

He said the investigation is very "fluid" and he could not anticipate when charges would be announced against O'Donnell.

When asked whether the Arkansas State Police could clarify the relationship between O'Donnell and Collins, Sadler said none of the investigators are "prepared to say with certainty that there is a connection at all and that this was not a chance encounter."

Collins served as a Republican senator for District 19, which includes Independence, Izard, Sharp and portions of Fulton and Randolph counties, from 2015 until this year. Before that, she served in the Arkansas House from 2011 to 2013.