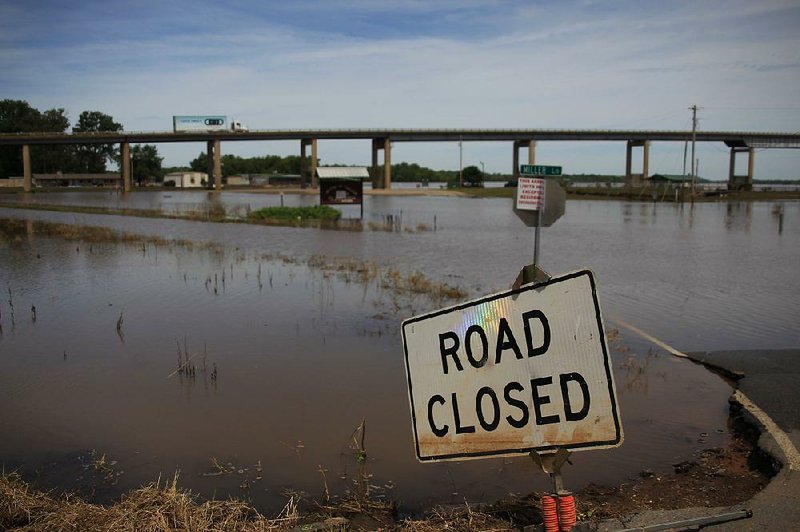 Most roads around Pendleton remain closed and under water Tuesday as the receding Arkansas River remains above flood stage. - Photo by Dale Ellis

PENDLETON -- While the Arkansas River has dropped below flood stage in many areas of the state, the Desha County town of Pendleton is still inundated with floodwaters.

The Arkansas River remained in major flood stage Tuesday in the southeast Arkansas town as well as at Pine Bluff in Jefferson County and will be for a few more days, said Jim Reynolds with the National Weather Service office in North Little Rock.

"At Pine Bluff, they are still just a little over 46 feet," Reynolds said on Tuesday. "They look like they'll drop out of major flood stage sometime around [tonight] into Thursday." 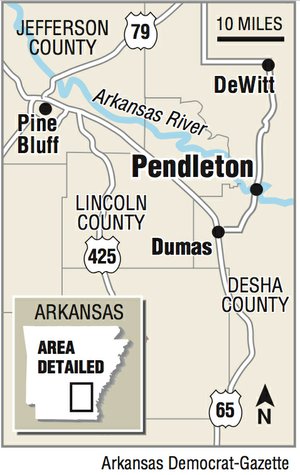 A map showing the location of Pendleton.

"It's going to continue to go down for the next several days into the later part of the month here," Reynolds said. "We have that location coming off of flood, it looks like, tentatively talking right now, a week from today."

Reynolds said the weather forecast for the next week is favorable for the prospects of things drying out over the next few days and predicts no precipitation of any note until at least the weekend.

"We're looking pretty dry through Saturday and then we have a system coming through that's bringing a chance of showers and thunderstorms Saturday night, Sunday, and into Monday," he said. "Now, some areas across the state could see maybe an inch or two in some of the heaviest storms during that time period. But otherwise, at least for that part, we're not really looking for that to add a whole lot into the equation."

Reynolds said forecasters are a bit more concerned by a system that could affect the area late next week.

"That could impact more of the state and also, northeast Oklahoma," he said, "that kind of brought our problems recently in the first place."

At Pendleton, a few residents businesses have just started cleaning up near the Arkansas River bridge that bisects the town.

Glendon Lambert, who owns a motel and some rental property in Pendleton, said residents kept watching and waiting as reports of flooding upriver rolled in but didn't realize until it was too late how severe the flooding was going to be.

"We sat here and watched it on television, so we knew what was going on," Lambert said. "We were kind of thinking we were going to get flooded out. We knew the flood stage was going to get up so high, but the record here was 34.1 [feet]."

Lambert said he had his motel surveyed and found it to be 36.4 feet above the bottom of the river.

"So I figured I was going to be OK," he said. "But then they increased it every time they would make a report on it and kept easing it up a half a foot or so. And when they got up to 37, I decided I'd better start sandbagging it."

But even sandbagging didn't help, Lambert said. The water found its way into the building anyway.

"Some of it seeped through the sandbags," he said. "Some of it may have come in through the sewer system, and I have a drain in the floor in the laundry room. I didn't sandbag that, and I don't know if water came in that way or not. I wasn't there to watch it. And if you aren't watching it, it doesn't take long. Even seep water will get inside."

Lambert said most of the town evacuated by the time the river began to spill into the streets.

"There's a few that tried to ride it out, two or three of them," he said. "But, later on, they called for help. It just got to be more than they could stand."

Looking across the water at the motel he owns, which is an extended stay facility, Lambert said there were seven families staying there when the flood came. Five families went to stay with friends or relatives, but two, he said, had nowhere to go. So he said he put them up at his farm in two campers he had recently purchased.

"But everything they had was in those rooms," he said.

Lambert said he had moved a small dump trailer to the property and he plans to begin cleaning up as early as today or the next day if the water has receded enough by then.

Asked if he had flood insurance, Lambert shook his head.

Lambert said most of the people in the community had no flood insurance.

"Most of the people who live here are semiretired, or they just don't have a whole lot of money, so they just do the best they can," he said. "We just need FEMA or the Red Cross or somebody to come in and help." 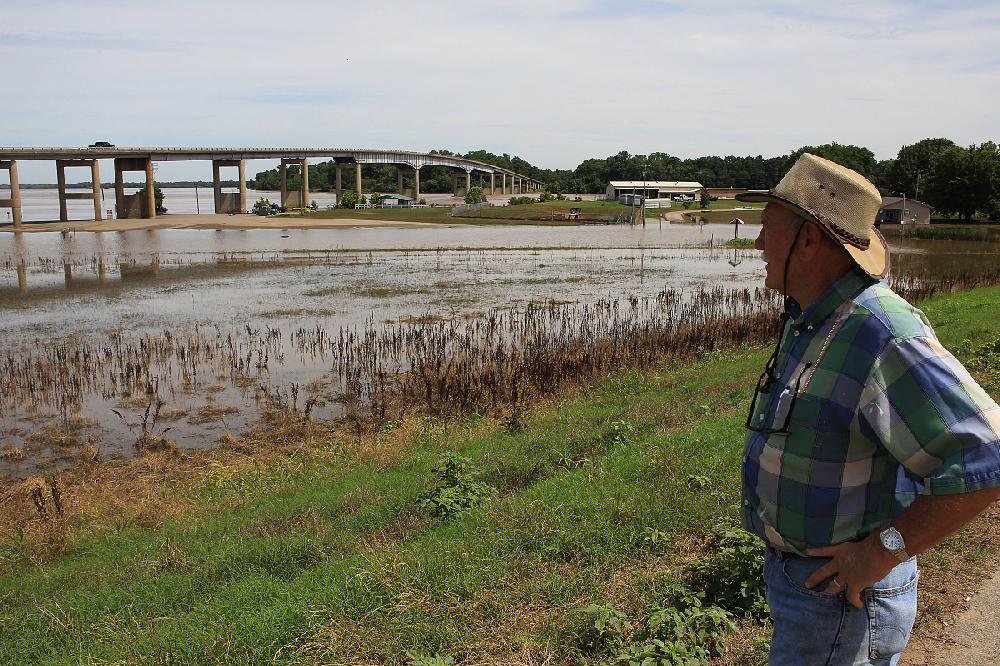 Glendon Lambert of Pendleton looks toward his town in Desha County as the Arkansas River begins to recede and reveal some of the heavy damage inflicted there. Lambert, who owns a motel and some rental property, said sandbagging didn’t help against the record flooding.

The Desha County judge, Richard Tindall, said that beside Pendleton, about 40 miles of roadway was destroyed in Snow Lake, a sparsely populated area to the north of Pendleton nestled between the White River and the Mississippi River.

"In places, the water was 5 feet deep," Tindall said. "People were trapped there and couldn't get out."

Tindall said he had talked with the governor's office and was told the county could not be declared a disaster area until the river crested and officials were able to fly over and confirm the flood damage.

"I can tell you that it is making the local people very uncomfortable that we are not included on the same disaster declaration that the rest of the state is," he said.

Hutchinson said in an interview Tuesday that he understood many counties that were affected by the Arkansas River flooding were not mentioned in the initial major disaster declaration sent to Trump and that he fully anticipates the list of counties to grow as more damage is assessed.

"We had to get this declaration in quickly," Hutchinson said. "We have not fully assessed the damage in Desha County and Pope County. There will be counties added to that when we finish further assessments."

In Jefferson County, County Judge Gerald Robinson said the Office of Emergency Management was out Monday doing damage assessments. He said so far in the Island Harbor Estates neighborhood and on Riverside Drive inside the city limit of Pine Bluff, emergency officials found 42 homes destroyed, 47 homes with major damage, 12 homes with minor damage and seven homes that were affected by flooding.

Other hard-hit areas of the county are Wright-Pastoria and Swan Lake. Robinson said those assessments will be made in coming days as water continues to recede. He said no assessments of infrastructure damage have been made yet.

"The water is still too high," he said.

Information for this article was contributed by Clara Turnage of the Arkansas Democrat-Gazette.