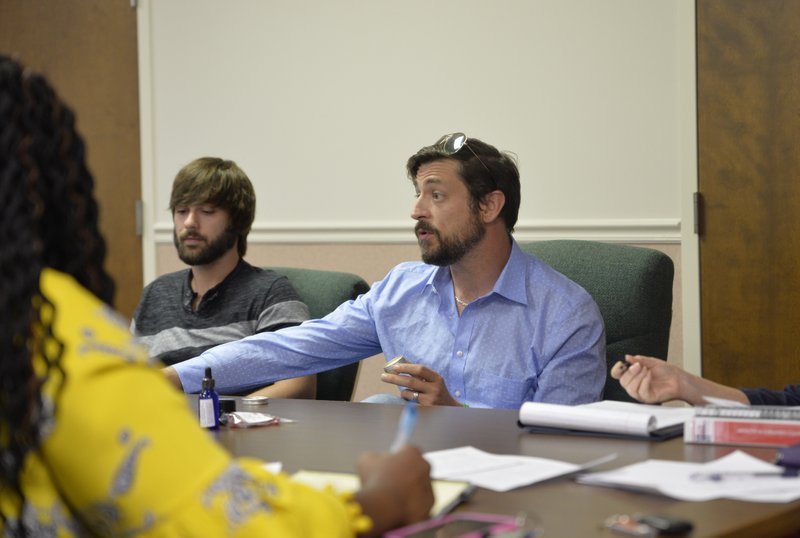 Michael Cary (right), an El Dorado-based CBD retailer and cannabis advocate, displays his company’s products as he speaks during a June 5 meeting of the Columbia County HEALTH Coalition in Magnolia. - Photo by J.D. Bailey

As laws involving the cannabis plant and its derivatives have loosened significantly in the past three years in Arkansas, business opportunities have opened and perceptions have changed.

On a national level, the passage of the December 2018 Farm Bill by Congress and its subsequent signing into law by President Donald Trump opened the country up to the sale of marijuana’s non-THC-rich cousin that many claim has the same pain- and stress-relieving benefits of the controlled substance, except it’s all totally legal and does not induce the “high” gained from ingesting traditional marijuana.

Hemp, or non-THC cannabis, is the root source of CBD, or cannabidiol. The substance has been used throughout history.

“CBD has been extracted and used in many ways — mostly in powders and creams — for hundreds of years,” said Michael Cary, an El Dorado-based cannabis advocate and owner of Magnolia’s At Ease Essentials that specializes in the sale of CBD products. “The Egyptians even used the cannabis plant because it had some kind of mysterious properties that they couldn’t discern.”

CBD, according to Cary, works primarily as a naturally-derived substance to combat pain, anxiety, and sleep problems. The cannabis plant is also now seen as a less intrusive method of treating epilepsy.

“I was diagnosed with temporal lobe epilepsy when I was three years old,” Cary added. “I was on a cocktail of 29 pills a day.”

In 1998, after reaching a medical crossroads, surgical operation treatments were discussed as a potential adult remedy for Cary. When one doctor suggested medical cannabis, a few in the room laughed, but the product was then used by the grandson of a Nazarene minister who was reluctant to use “drugs” and his aphasia seizures, or seizures that temporarily block the ability to express speech, were reduced.

Today, the medical stigma associated with cannabis products has largely subsided, but as Cary explains, some people experiencing vast prescription levels of pain and anxiety may need the high-intensity THC medical marijuana, but many others do not. And that’s where CBD comes in.

“THC is not terrible,” Cary said, “but it’s just a deeper medicine for deeper problems. The CBD, at the same time, has had some of the same effects on sleep problems, pain, and anxiety. Most of the folks seeking relief don’t even want to get the high associated with marijuana, they just want to feel better.”

Cary’s store in Magnolia sells a variety of CBD-rich oils, salves, edible gummies, and balms. There are no federal regulations yet on the products, but he does not sell to anyone under 18 and tries to carry high-quality products at a reasonable price.

The son of former Southern Arkansas University faculty members claims his prices are lower for two reasons: one, he wants as many people suffering from ailments to be treated and two, he does not use fancy labels on his bottles or containers.

“We could put really nice labels on all of our products,” he added. “But a label suite is $40,000. So either we have nice labels and a bottle of oil costs $15 more, or we don’t have the labels and they stay at a reasonable price.”

A 1,000 mg bottle of CBD oil at At Ease Essentials markets for $55. The same sized bottle, he claims, is around double from other retailers. The gummies and lotions, which the store also carries, range between $15 and $25.

Cary’s products are derived from cannabis plants grown in Colorado at an associate farm, flash-frozen at Kelvin levels and crystallized, then spun in a multi-million dollar, room-sized centrifuge to separate the CBD from the THC.

CBD products by mandate can only contain 0.3% THC. Cary says his products are well below the government mark.

“Basically, CBD is cannabis for the rest of us,” he added. “You’re not going to get high from this. And that’s kind what has brought a lot of people on board.”

The most common question Cary gets when selling or speaking about CBD comes from the presumption that the substance will show up on a work-related drug test. But he claims that is simply not an issue to worry about.

“They’re testing for THC,” he said. “Specifically what’s called Delta-9. And when you burn that plant or ingest that plant, your body has an acid response to it. They test for that acid in your urine. So, the answer to: ‘Will I fail a drug test?’ is no’ — it’s legal.”

Cary makes it clear that he is not a doctor and that although the FDA considers CBD products “safe,” they have not yet been formally regulated.

“If you have any hesitations about anything, we always encourage you to check with your doctor or pharmacist first,” he added.

The N. Jackson Street retail shop is also growing. Since opening in February, its sales have steadily grown as the word-of-mouth has brought in more residents hoping for ailment relief. Most customers, the store says, are over the age of 60, but the products are effective for any age.

When asked if the seemingly magical CBD effects could all be in one’s head and considered a placebo, Cary says that is not something he believes.

“We tried because we were actually wondering the same thing,” he said. “We did a run with someone who had used our gummies for three months and asked her to try our ‘new ones’ that actually didn’t have CBD in them. She returned and said, ‘This didn’t work, I didn’t feel a thing.’ And that was that.”

The products also have about an 88% return rate, according to Cary.

“People are just amazed that a little plant can do so much,” he added.