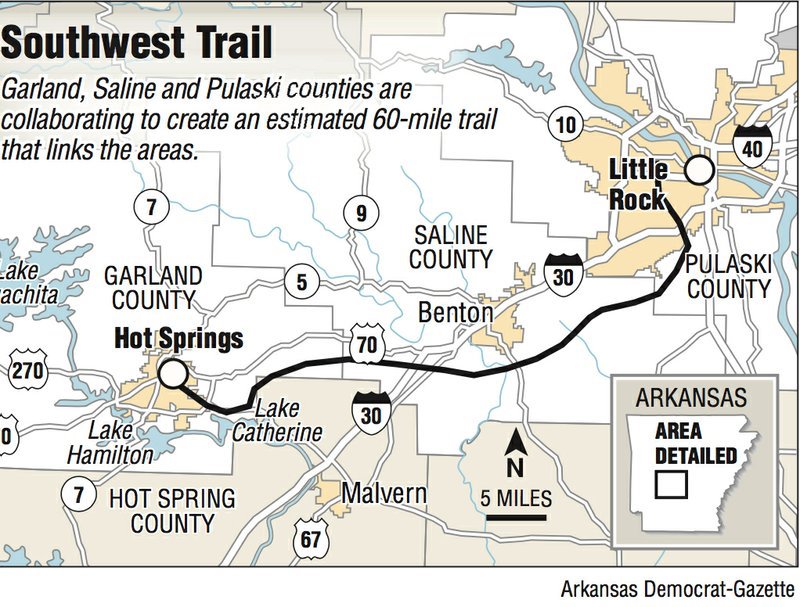 Central Arkansans are stepping forward in their efforts to make a trail from Little Rock to Hot Springs a reality, hoping to complete it within the next three years.

The Southwest Trail will cost an estimated $42 million, said Wallace Smith, the director of federal services and vice president of Garver, the engineering firm that is designing it.

The project has relied on a mix of grants and money from Garland, Pulaski and Saline counties, all of which the trail crosses, according to Darryl Mahoney, the county judge of Garland County.

The county judges expect the nearly 60-mile-long trail to be a financially lucrative investment.

Smith noted that the Razorback Greenway, a trail system that spans Northwest Arkansas, has become a financial boon to the involved communities.

Three studies from the Walton Family Foundation, which helped create the trail, stated the Greenway provided $137 million to Northwest Arkansas in 2017.

Mahoney said the trail from Little Rock to Hot Springs will bring a healthy group of people to the area and allow easy access to central Arkansans.

"The biggest thing is quality of life for people involved," Mahoney said.

Garver employees worked on sections of the Razorback Greenway and note it as the state's only trail comparable to the planned Southwest Trail.

Currently, the firm is working to conduct an assessment, showing how the trail will affect environmental factors in its anticipated habitat, including the impact on wetlands, American Indian artifacts, endangered species and property owners, Smith said.

After Garver employees complete this assessment, the federal government will have to approve it, clearing the way for them to begin the trail's design process.

Smith said he hopes to get this approval by the end of October.

While working on the design, Garver engineers will determine whether the trail should be made of asphalt or concrete, where people will access and exit the trail and the width of the trail, among additional decisions.

This should take approximately a year, putting the construction start date at roughly October 2020 with construction lasting about 12 to 18 months.

Officials are still looking for grants and private donations to reach this point.

But the Southwest Trail was around as a horse trail back in the mid-1800s.

Smith said of this historical detail, he is "literally talking about horses and wagons, St. Louis to Texas."

Smith said the group has come a long way to re-establish the historic trail.

"This is much more of a reality today" than it was when the county judges initially began discussing the trail, Smith said.