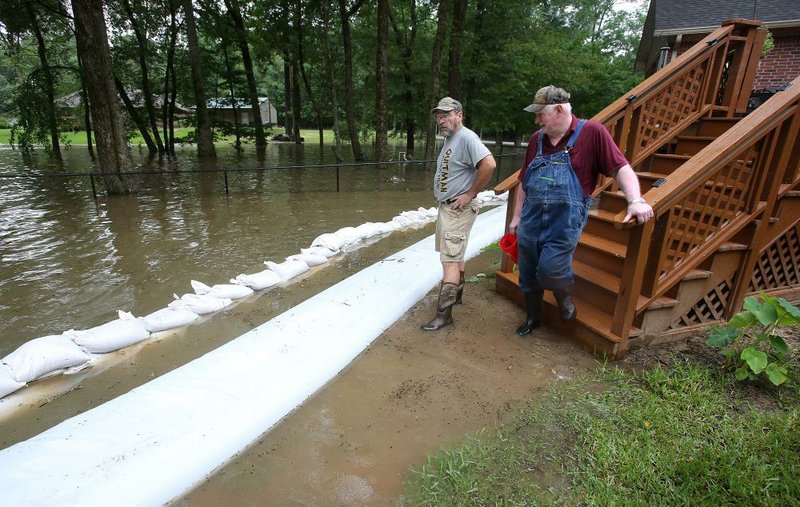 David Binz (right) and his son-in-law, David Woodall of Quitman, check the sandbag wall Thursday around Binz’s home on Lake Conway in Mayflower. Water was seeping toward the house. “I’ve done everything I can, all I can do is wait now,” Binz said. More photos are available at arkansasonline.com/67flooding/ - Photo by Thomas Metthe

Deterioration of a levee late Thursday in Faulkner County has led Conway officials to recommend the evacuation of residents in the Lollie Bottoms area.

Conway city spokesman Bobby M. Kelly III said about 9:45 p.m. that officials monitoring Lollie Levee -- which was under 24-hour observation -- had reported additional deterioration of the structure that could lead to a breach at any time.

Conway sent out a message on Twitter warning residents in the area that the levee had deteriorated and that the Conway Fire Department and the U.S. Army Corps of Engineers recommended evacuation.

"I think possibly a big piece of debris collided with the repairs we were making, but there's so much force behind that water that it could have just been regular deterioration," Kelly said.

Alerts were issued by radio, phone notifications and the National Weather Service to people living in or near Lollie Bottoms, Kelly said.

The structure had developed a "higher risk" after the inner wall began to "slough off" and get carried downstream, said County Judge Jim Baker.

"The levee is still holding," Baker said at 10 p.m. "We evacuated the area as a safety precaution. The levee is not breaking, but it may break. We have some confidence that it won't."

Baker said it's a race against time. As water from the Arkansas River recedes, the river level will lower to a point where the levee is stronger but the speed of the floodwaters remained a concern.

The area is sparsely populated, and many of those who live there are families, officials said.

"Four homes are at risk," Baker said. "There was only one home that was populated at the moment. Everyone else had already left the area before the alert had been sent out."

"There is also a very little risk to west Conway, but it's 8 to 10 miles away from the Lollie Bottoms area," the county judge said.

Conway Mayor Bart Castleberry, the city's Fire Department, the Faulkner County Fire Department and the Corps of Engineers continued to monitor the situation at the levee late Thursday, Baker said.