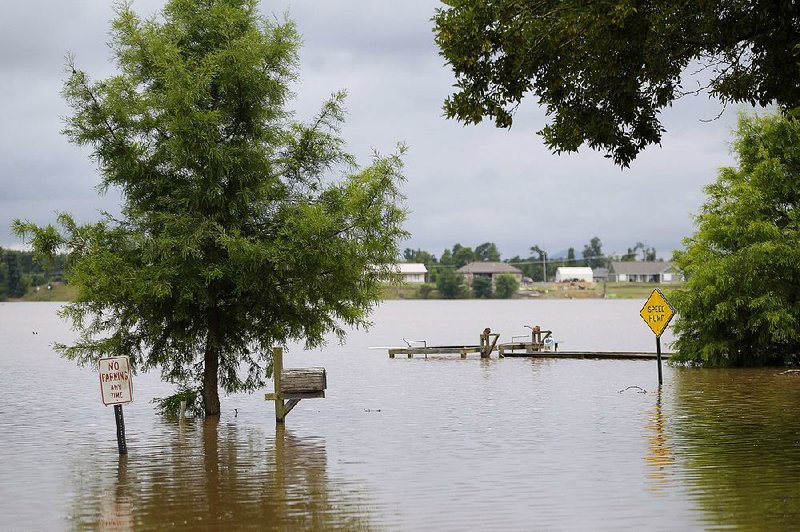 Shoreline Drive on Lake Conway is covered by floodwaters Thursday. Although the Arkansas River is starting to go down at Toad Suck, water continues to drain into the lake for now. - Photo by Thomas Metthe

Hutchinson said in a letter to President Donald Trump that Arkansas needs an estimated $27 million to cover housing needs for people washed out of their homes due to recent flooding along the Arkansas River.

An approval would allow organizations and local governments helping with flood recovery to tap into federal funds for rebuilding and repairing homes, as well as for finding temporary housing for flood victims.

Some 857 homes were destroyed or heavily damaged in those counties, according to the letter. Hutchinson said the state will add more communities to the request if needed.

“The individuals that reside in the eight counties are seeking to remain in their communities but asking for assistance to repair their property,” Hutchinson wrote in the letter, which also provides financial estimates due to the damage.

Cleanup could cost more than $8 million, and repairing damaged infrastructure may exceed $100 million, according to information from the governor’s office.

Trump approved a major disaster declaration for Arkansas late last month, which allows federal agencies beyond FEMA for aid with relief and recovery.

Hutchinson said in a statement Friday announcing his request that final estimates will likely be record-breaking.

“These preliminary estimates are based upon assessments while the water is still in place,” he said. “As the water recedes, we will have a clearer picture of the overall damage in the state.”

It’s led to hundreds of homes being evacuated with several areas still above flood stages.

At least one levee failed last week, and officials on Friday were watching another in Faulkner County.

River levels were falling in Little Rock and areas upstream, but many remained high and in major flood stages.

Searcy County Sheriff Kenny Cassell said deputies and local police helped a group of 14 people and their dogs to higher ground after the fast-rising river swallowed up their bags and tents around 2 a.m. in Marshall.

“They were scared,” Cassell said, adding that authorities didn’t have to perform any swift-water rescues in the swollen river. “They just needed help.”

Agencies responded to similar calls several times as heavy rain fell through the night, triggering flash floods and bringing the Buffalo River to flood stages in some areas.

Park officials said they haven’t noted any injuries but have contacted several paddlers and campers.

“Our rangers are actively out on the river performing multiple rescues,” said Park Service spokeswoman Lauren Ray. She said rangers have been giving river-goers rides back to their vehicles.

Ray cautioned people to avoid parts of the river that are high, saying the water is fast-moving and has a lot of large debris in it.

Cassell said the early morning call could have been worse, especially during busier times of the year when campers flock to the area and set up “a wall of tents” along the river bank.

He said authorities brought the group of 14 back to the sheriff's office to dry out and warm up.

National Weather Service data shows a roughly 130-mile stretch of the Buffalo River is above flood level from Ponca to where the Buffalo and White Rivers meet near Buffalo City.

Roughly three to four inches of rain fell through the night, and the agency expects thunderstorms and rain starting in the afternoon.

Weather officials are tracking drier and cooler temperatures next week.