Regarding his home run, Magnolia’s Matt Goodheart said, “It honestly felt very good. It was probably the best ball I’ve hit with two strikes this year. As soon as I hit it, I knew it had a good chance of going. It was the best feeling in the world.”

FAYETTEVILLE — The Arkansas Razorback will take on SEC rival Ole Miss this weekend in Fayetteville during the NCAA Super Regional Tournament. They advanced to host a super regional matchup for the second straight year following a 6-0 win over TCU two days ago in regional on their home field.

Arkansas (44-17), seeded fifth nationally, swept a home regional for the second consecutive year . They were an out away from the national title last year before losing twice to Oregon State in the College World Series.

Patrick Wicklander combined with two relievers on a five-hitter, while sophomore Matt Goodheart had a good day at the plate

Dominic Fletcher had a two-run double in a three-run first inning. 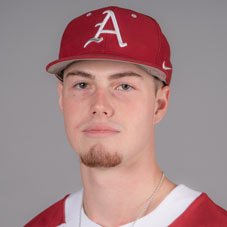 The former Magnolia standout, Arkansas’ designated-hitter, put one of the final daggers into TCU’s season when he crushed his two-run home run off the scoreboard in right-centerfield in the fifth inning. The blast was his fourth of the year. He has four hits in the regional and has homered twice in his last four games. Goodheart went 3-for-4 at the plate and scored three runs.

The Horned Frogs had reached the CWS four straight years starting in 2014 before getting left out of the NCAA Tournament last year. They were a surprise at-large choice before beating California in their regional opener and getting a 9-5 win over Central Connecticut State in an elimination game earlier Sunday.