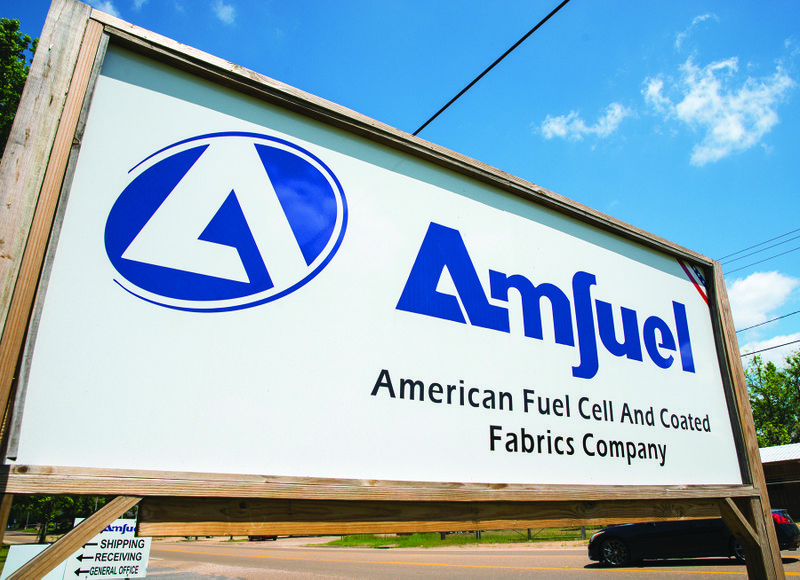 The Amfuel manufacturing facility at 601 Firestone Drive in Magnolia.

Almost a year after filing for Chapter 11 bankruptcy protection in federal court, American Fuel Cell and Coated Fabrics Company, or Amfuel, of Magnolia is selling to a private ownership group for $1.625 million.

According to a court order of sale filed Nov. 15 in U.S. Bankruptcy Court for the Texas Northern District Fort Worth Division, the Magnolia plant and “substantially all” of its assets have been purchased by LB Amfuel LLC and LB Amfuel Real Estate LLC — both of which are listed as Delaware incorporations, according to mid-Atlantic state’s government database.

Investors in the new company, according to the filing, are Los Angeles-based Russell Belinksy, co-founder of the California investment firm LB Capital Advisors, and Glenn Leonard, a managing director at the Utah-based JetCapital. According to their corporate and professional media sites, Belinsky is an attorney with private equity experience going back at least to 1990 and Leonard is a licensed pilot with Texas ties who has business experience in commercial and corporate aviation.

Amfuel’s ownership before the sale was based in Wichita Falls, Texas.

In an expedited sale motion filed Oct. 22, according to the Arkansas Democrat-Gazette, Ft. Worth, Texas, bankruptcy attorney Matthias Kleinsasser said Amfuel’s “financial position is extremely precarious” and it “may run out of funds before the end of the year.”

“At closing, $250,000 of the purchase price will be deposited into and held in escrow,” said the sale order.

The closing date was slated to have taken place between Nov. 29 and Dec. 14. The last filings in the case were made Dec. 27.

The Magnolia plant in September 2016 was awarded Department of Defense contracts of $21.763 million and a $8.07 million to manufacture F-16 and A-10 fuel cells through 2022, according to DoD records.

According to public discussions at regular board gatherings of the former Magnolia Economic Development Corporation in 2017, the Magnolia plant’s main advantage lies in its grandfathered-in commercial permits, which in Texas, and many other states now, are nearly impossible to attain. The permitting advantage also makes it difficult to uproot the plant from the town it has called home since the mid-20th century. The plant in 2017 was also said to be in need of HVAC upgrades.

Magnolia Economic Director Cammie Hambrice, according to the ADG report, is scheduled to meet with Amfuel’s new investors in early January.

“I think it’s going to be a good turnaround for the company,” she said. “We’re excited.”

The company, according to bankruptcy filings, employs 243 employees.