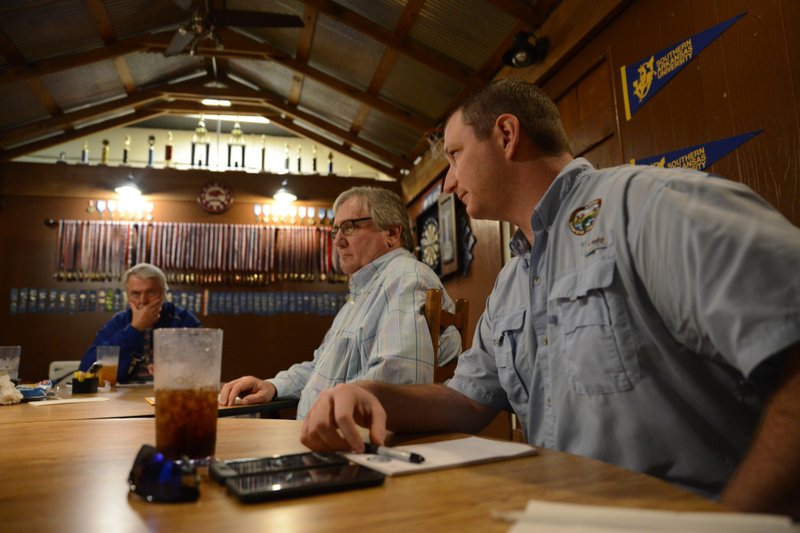 On Monday, Andy Yung, AGFC head biologist for the southwest Arkansas district, spoke to Lake Columbia’s governing board, the Rural Development Authority (RDA), further detailing the dangers of Giant Salvinia, should the invasive vegetation ever make its way to Magnolia.

Yung said his supervisor and an AGFC aquatic species coordinator surveyed nearby Lake Erling after the plant was spotted there in December, and in the months since, and has now made its way around the lake.

“I think he’s surveyed every inch of shore line,” said Yung. “He’s gone up Walker Creek, up by the dam, both sides of the lake — east and west — and he even went above Holtzclaw Bridge and past all that. We’ve got a pretty good handle on where it’s at. Unfortunately, that handle is that it’s pretty much everywhere.”

Yung said there are some areas that it wasn’t found along the banks, but that it was seen rarely in the open.

“There are some areas that we haven’t found it, but we’ve also found pieces of it just floating across the middle of the lake,” he added. “This stuff fragments.”

Gunnels stated the plant was also seen “all over” an Erling boat ramp.

Erling’s AGRED Foundation and AGFC in the summer — possibly July, August, or September, according to Yung — plan to draw the lake down to “cook” the plant in the summer heat and deprive it of water.

Transport of the plant is easy. The biologist through the commission’s research contacts in Texas, where the plant is much more prevalent, said duck hunters were a large culprit, as well as boaters.

“It tends to show up in these little duck holes, where you almost can’t even get to,” he said. “I think when they are drawing in decoys, they just start wrapping lines, and there it is. Then they throw out decoys in another area and don’t worry about it.”

John Ed Gunnels, lake manager at Lake Columbia, said that stowing decoys in wet, closed bags, also keeps the plant alive, then it is able to spread the next time decoys are thrown in another location.

“This stuff is pretty nasty. It expands rapidly — extremely rapidly,” Yung added. “… We’ve geared a lot of efforts toward fisherman — cleaning and draining and drying your boats and gear — and that is a big part of it, but we’re finding that folks need to be targeting some of these hunters, too, because they may not fish at all.”

Lake Columbia, according to Gunnels, does receive a good amount of duck hunters during the season.

Yung also pointed out that some ramps at northern Louisiana lakes, such as Lake Bistineau in Webster Parish, Bossier, and Bienville Parishes, often times in the summer are unusable due to the abundance of the plant.

“It looks like you can walk across it,” he said.

Weevils can often be used to eat and destroy Giant Salvinia, but in lakes as far north as Columbia and Erling, the weather may be too cool.

“Unfortunately, the cold tolerance of Giant Salvinia is higher than the weevils,” Yung said. “There are some guys working through LSU’s extension trying to breed some more cold-tolerant weevils, but at this time, it’s really not an option for us.”

For years, the Arkansas-Louisiana border was thought to be the unofficial line of demarcation for the plant, but Yung said warmer winters recently have aided in the spread of the plant northward. A solid freeze, though, would help in drawing back the spread of the invasive species originating from Southern and Central America.

“It likes the heat and the warm weather,” Yung said. “But if we get a really hard winter, it should knock that stuff back.”

The Game and Fish Commission and RDAs’ biggest concerns are what may happen if the plant makes it into Lake Columbia. Since it is a water source for Magnolia, chemical spraying to kill the species is not an option.

“We really don’t have a way to control it,” said Yung. “I don’t know what we’ll do if it gets in there.”

The biologist did note that since Columbia, like Erling but even more so, is an open, wind-swept lake, Giant Salvinia does not typically spread to the middle like it does in swampier, more stagnant water bodies.

“We’re hoping that Erling is not going to take off,” Yung said. “… Columbia is really open, too.”

If the plant did make its way to Columbia, Gunnels said the only thing he could see the rid the lake of the plant would be a major summer drawdown to starve the plant of water and kill it.

For fishing, Columbia would also be severely hampered. Gunnels said on some places at Louisiana’s Toledo Bend, 2 oz. weights are needed on baits to push through the grass. 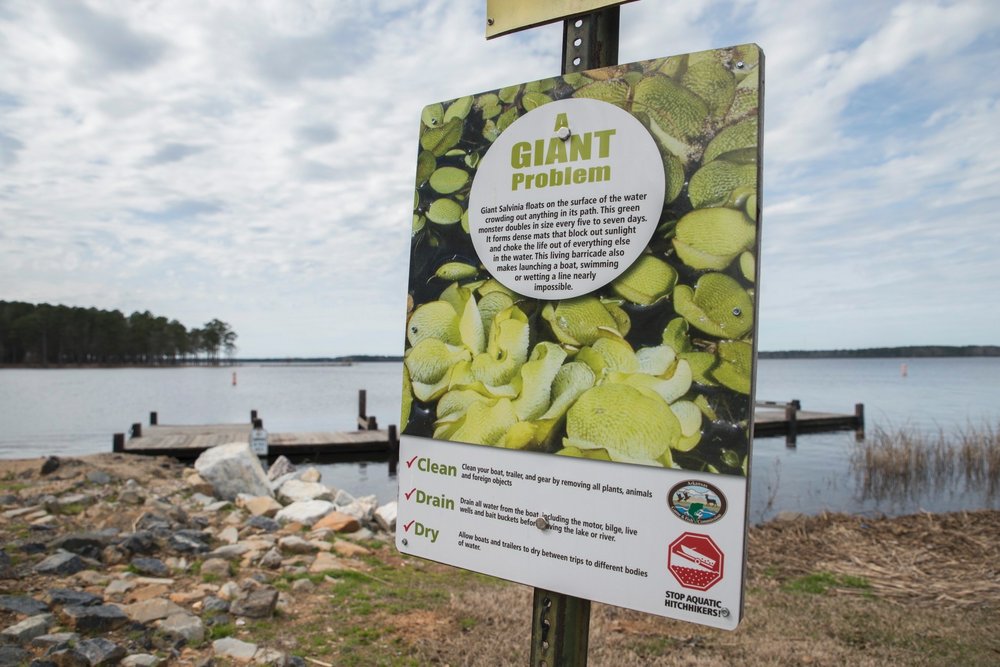 A sign at Lake Columbia’s South Shore Landing indicates the dangers of Giant Salvinia, if it were ever to be transported to the Magnolia water source.

As for a water source for Magnolia, if Giant Salvinia took over Columbia, extra steps would need to be taken in water processing.

“If it totally took over, we might have a taste and odor problem,” said Magnolia Water System employee David Riley. “We’d have to add a few extra chemicals.”

The water manager also indicated that unless the lake was absolutely covered by the plant, Magnolia’s water supply would probably not be affected.

“It takes over and depletes oxygen, then the other vegetation that you want can’t grow, and the fish die,” Gunnels added.

Giant Salvinia can be transported on a boat or in its contents, even without the boater or angler or hunter knowing. Remnants of the species can even be located in a water pump and birds can carry the plant from lake to lake.

“People need to clean their boats and trailers, drain bilge pumps and live-wells and dry everything out,” Gunnels added. “One sprig of that stuff can cover 40 square miles in 90 days in a ripe environment.”

Lake Columbia now has signs warning of the dangers of Giant Salvinia. On Monday, two signs were seen at South Shore Landing’s ramps in prominent locations to notify the public of the potential plant threat they could be carrying. Anglers, boaters, and hunters have also been asked to spread the word through social media.