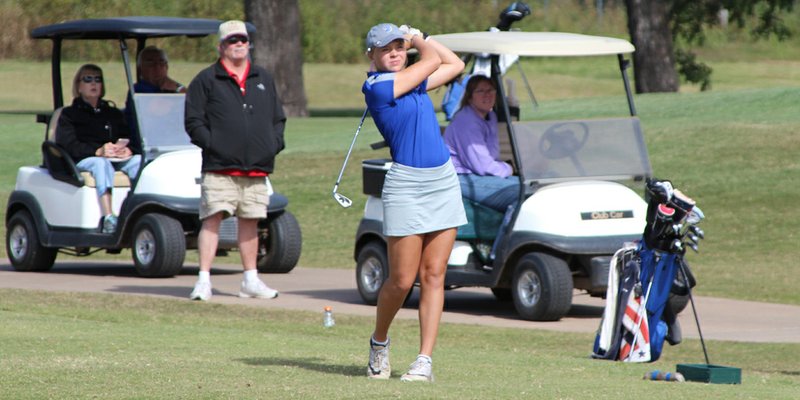 SAU Sophomore Mackenzy Turner tees off during a match last season, when she was named All-GAC Honorable Mention.

The Great American Conference released its preseason poll for the upcoming women’s golf season, and the Lady Muleriders found themselves ranked sixth out of nine teams. The Muleriders received 29 points, two points ahead of Harding and five points behind Oklahoma Baptist.

The Lady Muleriders look to improve on a season that saw them win a Battle of the Timberlands dual match against Arkansas-Monticello, and place seventh in the GAC Championships. The Lady Muleriders return five members of last year’s team, including All-GAC Honorable Mention Mackenzy Turner, who is entering her sophomore season.

The Muleriders open the fall schedule next week in Blue Springs, Missouri to take part in the Central Region Fall Preview on September 3rd and 4th.

The following week, they will travel to Oklahoma to Tahlequah to play in the NSU Classic hosted by Northeastern State.

They will travel back to Oklahoma three weeks later as Central Oklahoma hosts the UCO Classic in Edmond.

They wrap up their fall schedule three weeks later in Danville, Arkansas as a part of the Arkansas Tech Fall Invite.