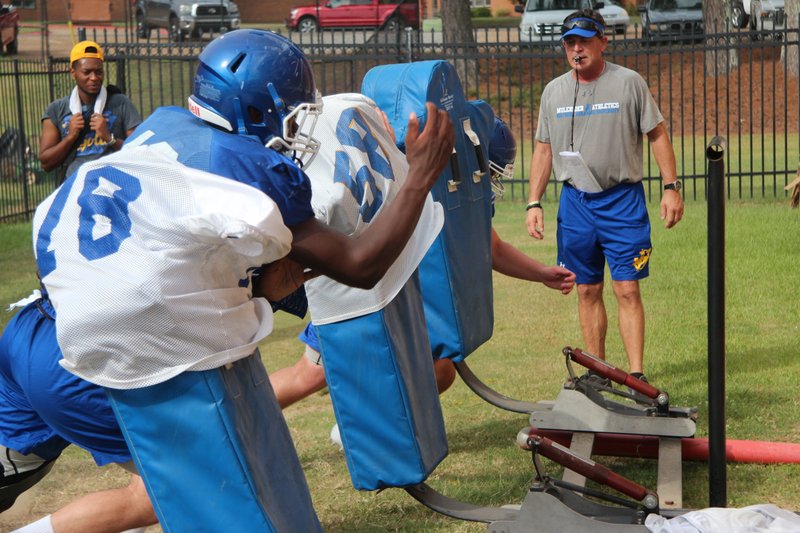 Southern Arkansas has a lot of unanswered questions going into the football season, but head coach Bill Keopple said the answers are coming daily on the practice field.

“We are feeling better and better each day,” Keopple told Magnolia Rotarians during a meeting last week.

“Knock on wood, I think we are going to be alright if we avoid the injury bug,” he said.

The Muleriders are still more than a week away from starting the new season on Thursday, Sept. 5, in Bethany, Okla., against Southern Nazarene.

The question Keopple saying he’s hearing the most is how the Muleriders will replace All-Americans Barrett Renner, Ka’Ronce Higgins and Devondrick Lison.

Renner was a four-year starter at quarterback and SAU’s all-time passing leader.

“I don’t think you replace someone like that, you build around the person who’s taking his place. The same is true for all-time leading receiver Higgins and sack leader Lison,” explained the coach.

“We think we have some answers. Junior quarterback Hayden Mallory is just as talented as Renner, but not as tall. He has a stronger arm, just as smart and makes good decisions. We will just have to wait and see what he’s able to do,” mentioned Keopple.

He pointed that red-shirt freshman Mahleik Darty is just as talented as Higgins, but again explained that time will be the determining factor as how he does in that role.

Regarding the loss of Lison, Keopple said the defensive line is more talented and deep than he’s ever seen.

“We’re talking about 12 guys deep in four position. That’s big in our football program,” he said.

The coach pointed out that four out of five secondary starters are back, as well as three talented returning linebackers in juniors Kobe McDonald of Magnolia and DeMarcus Pegue, and senior Malik Preston.

Also on offensive, the coach said the backfield and offensive line are better than last season.

“We had four freshmen play for us on the offensive line last year and they are all back. We also have an all-conference tight end back,” he mentioned.

Keopple said he has a great group of young men in the program and SAU has knocked on the GAC championship door very hard the past two season.

“We believe it’s our time to win a championship and no one wants it more than I do,” said the 10-year veteran coach. “We want those rings, but there are several pieces of that puzzle that must come together.”

SAU has been picked to finish third in this season’s GAC race behind firstplace Ouachita Baptist and second-place Harding.

The coach said he really does not have all the answers to what’s in store for this season, but added, “I like what I see when these guys are on the practice field.”

“Our expectations are really, really high. I don’t ever know how a game will play out, but I tell you that we don’t expect to fall off effort-wise one bit,” he explained. “We have to go prove it.”

The SAU coach said the 2019 Muleriders have more dedication, more depth and best work ethics of any team he has ever had.

According to Keopple, the SAU football program is moving in the right direction and not just because of wins and losses.

He noted that with talented athletes SAU loss last season, it was a compliment that coaches around the league and even Hooten’s Magazine to pick the Muleriders third.

“Someone even gave us a first-place vote, which is saying something,” he added.

“We have some quality young guys here who want to earn a degree. That’s the first thing we talk about when we recruit them,” said the coach. “I not just bring young men in here just because they can play football. That has to be part of the equation, but they have to be coming to get a degree.”

In another matter, the coach said he just recently found out that the Muleriders have the longest home winning streak of any team in NCAA Division II.

“I didn’t know that. We have won 16 home games in a row. We are 28-3 overall in seven years at Wilkins Stadium. That’s impressive,” said Keopple, adding SAU plays 11 GAC games.