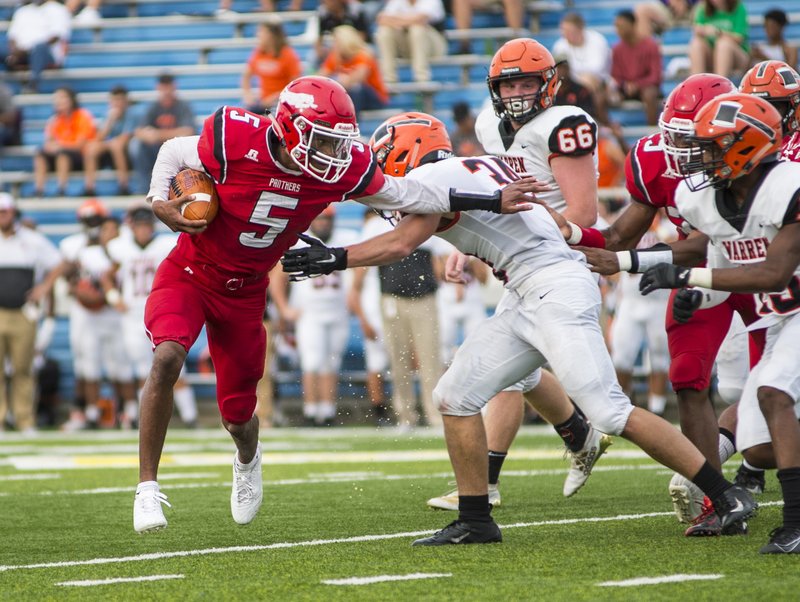 Senior Vincent Steppes led the No. 3 Lumberjacks (1-0) with 94 yards rushing and four touchdowns, while senior Amir Cooper paced the Panthers (0-1) with 127 yards on the ground and a touchdown.

Magnolia’s’ defense set the tone early when junior linebacker Malachi Copeland intercepted a pass. Cooper had a 20-yard run and senior quarterback Braylen Beasley followed with a 1-yard TD run. A failed PAT left the the Panthers in front 6-0.

The Lumberjacks answered quickly as Steppes broke loose on a 48-yard scoring run on the next possession to put Warren up 7-0 following the PAT. After a short Magnolia punt from its own end zone, Warren scored off a 26-yard touchdown pass from quarterback Riley Cornish to Devante Smith, making it 14-6. 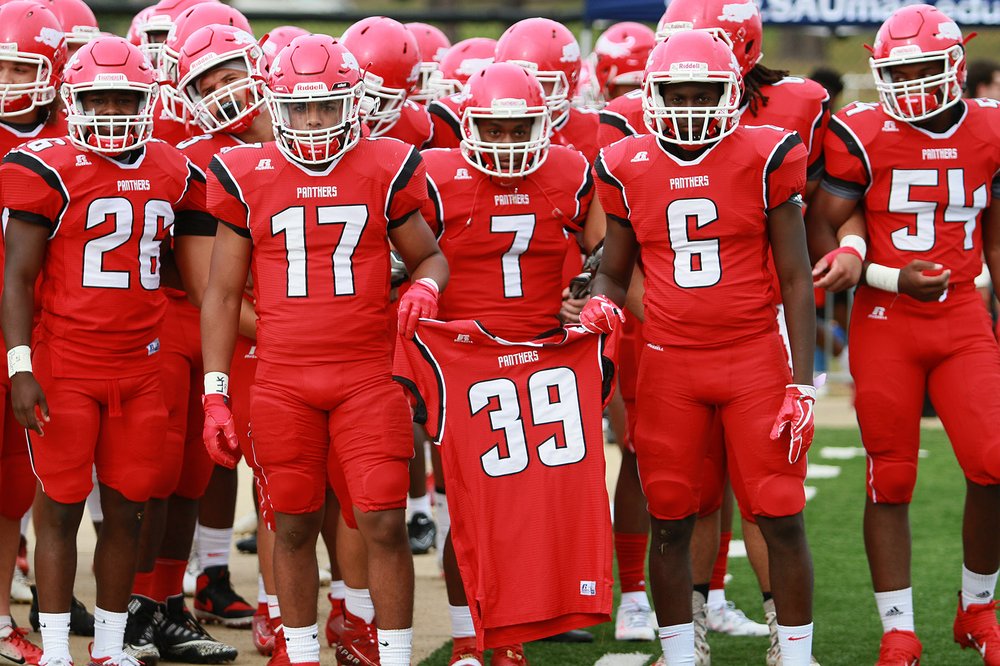 Classmates Amir Cooper (17) and Sidtravious Hampton (6) holds the jersey of fellow classmate Kendrell Harris prior to Tuesday’s season-opener against Warren. The senior wide receiver/defensive back was killed in an automobile accident last weekend.

After starting on its own 19, Magnolia managed to move the ball 73 yards in 13 plays but couldn’t come away with any points. They gave the ball over on downs following a motion penalty. Following a personal foul penalty on the Magnolia defense and a 21-yard pass by Warren, Steppes again guided the Lumberjacks to the end zone. First with a 21-yard run and then on the 6-yard scoring carry, making with 21-6 left in the first half.

Despite putting the ball on the ground three times during the next possession, the Panther managed to march 81 yards in 12 plays to cut the lead before halftime. Cameron Warren has an 11-yard run and Beasley threw for 14 to Khalil Collins. Cooper scored from the 9 yards out with 21 seconds on the clock and Jay Todd Baker’s PAT made it 21-13.

The Lumberjacks scored twice in the third period, first following a Magnolia fumble. Steppes’ 7-yard score pushed the lead to 27-13 early in the quarter. Following a short Magnolia punt, Steppes got his fourth TD on a 3-yard run to make it 34-13.

Backup quarterback Tanner Nielsen then engineered a nine-play, 77-yard Magnolia touchdown drive. After big runs by Javorrea Murphy and Cooper, DeMarco Walker scord from the 4 that made it 34-21 with 10:56 remaining. A 79-yard touchdown pass from Cornish to Tre’ton Marshalll on the ensuing possession pushed the score to 41-21.

Nielsen again marched the Panthers down the field again, moving from his own 17 to the Warren 4 line before Magnolia had to five the ball over on downs. After a defensive stop and getting their best field position of the game, the Panthers came up empty again when Cooper fumbled the ball in the end zone with less than a minute to play.

The Panthers will host Crossett on Friday, Sept. 6, at Panther Stadium. Kickoff will be at 7 p.m.