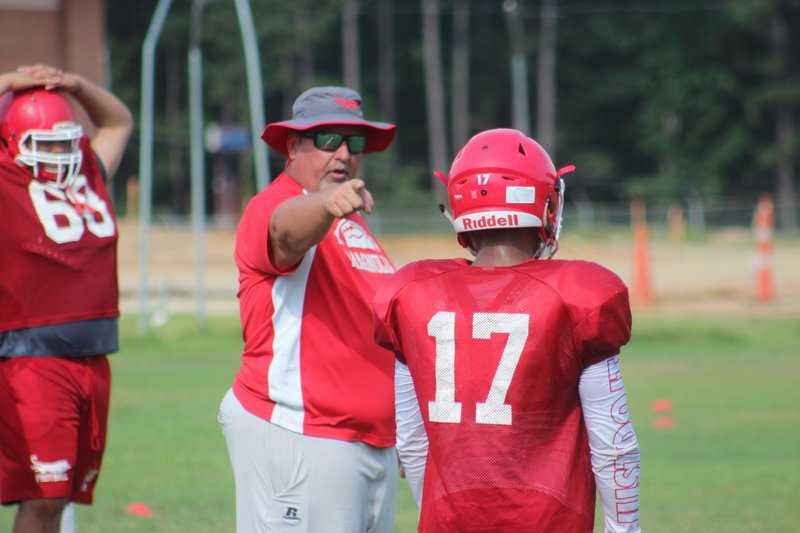 A new auxiliary gymnasium, cosmetic change to older facilities, and new faces heading up at least seven athletic programs will be noticeable by fans during the upcoming year in the Magnolia School District.

“I will always agree that it’s a great day to be a Panther. Though I’m the boat with the rest of them, I’m very excited about this season and what every new face has to offer the Magnolia Athletic Department,” said Dyun Long, who is also beginning his first year as the district’s new athletic director.

“Coach (Marvin) Lindsey was gracious enough to allow me to shadow him last spring, but I’m learning as we go. I know I can call him, and I’m also getting great guidance from MHS principal Chris Carter, superintendent John Ward and others,” said Long.

According to Long, former Foreman head coach Mark King will guide the Panther football program this season. New faces joining his staff is former Hampton head coach Wes Ables, who will be the Panthers’ defensive coordinator. Also, Sam Cowling, who was on the Cub’s staff last season, was elevated to the high school.

Anthony Meeker, who was at Hope last season, has been hired to serve as defensive coordinator of the Cubs this year. Anthony Hammons came over from Bearden to assist with girls’ basketball.

Magnolia’s Merina Powell was moved up to coach high school volleyball, while current head baseball coach Bobby Beeson will also be in charge of the golf program. Ben Lindsey was hired to replace Long as head basketball coach of the Panthers.

Horatio’s Dustin Bakenhus was hired by Magnolia as the new softball coach, while Hannah Hurley is the new person in charge of the cheerleaders.

“Again, we have a lot of new faces in our program and I’m excited about it,” stated Long.

He also noted that fans will also notice many changes, including the new MHS auxiliary gymnasium.

“We are hoping in the next few week, that facility will be completely done. There’s still some concrete work remaining, but it’s coming along just fine,” mentioned Long. “We are using the gym right now. They still have to put the curtain in. It will have two full floors running in the same directions, with many lines on it for multipupose use.”

Other than accommodating other sports that need indoor use, the AD there’s a possibility that the annual year-end sports banquet will be held in it.

Regarding Panther Stadium, the district have put in place columns along the front to match the two ticket booths and put a black paint coating on the outside fence near the road. Air conditioning in being install in the old weight room on the visitor’s side and will be used as locker rooms for visiting teams during half-time of football games.

“We have a lot of cosmetic things and the community knows about about the major construction going on such as the MHS Freshman Academy, Performing Arts facility that will include a parking lot near the softball field and the health clinic project at Central.

Another major change that’s drawing attention throughout the community is the new Magnolia Athletic Pass.

“This is something new and I feel it’s a great deal for our students. Every student, from 7th through 12th grade, can purchase a season athletic pass that gets them into every regular season sporting event at Magnolia each semester. That’s basketball, baseball, football, volleyball or whatever,” explained Long.

He noted that price of admission at all home games will be $5 for everyone, regardless of age.

“It will no longer be $4, but $5 across the board. We doing this because everyone in our conference is doing it,” he said.

The athletic director said the passes are not paper, but plastic and will include the student’s picture. He mentioned that paper passes will still be issued to each athlete in their respective sports, but is only good for that sport. They would have to pay the admission price to enter other sports.

“When you consider the number of junior and senior high sporting events held each school year, it only makes since to buy the pass. Look at the savings. At $5 a pop, it will cost a kid about $50 to attend every home basketball game and another $25 for football. That’s not counting paying when they attend baseball and volleyball. People say we’re losing money doing it this way, but we say it’s all about the kids. We want them at all of our home events and this is a way to make it affordable. Imagine what kind of home advantage we will have when all of these kids are there cheering,” said Long.He wants parents to know that the passes are not good for benefit games such as the one against Mena on Tuesday or any postseason or tournament events.

Long said the district is going to monitor and see how the new pass system works out.

“I’ve had people ask me if we would do something similar for fans. We don’t know if this project is going to be expanded or not. What I do know is that it’s something special for our kids and that’s our primary concern,” he said, adding indirectly it is helping some families as well because many have two or more students.

Magnolia fans seeking the free 65-and-older passes can still get one by stopping by the athletic director’s office during school hours.