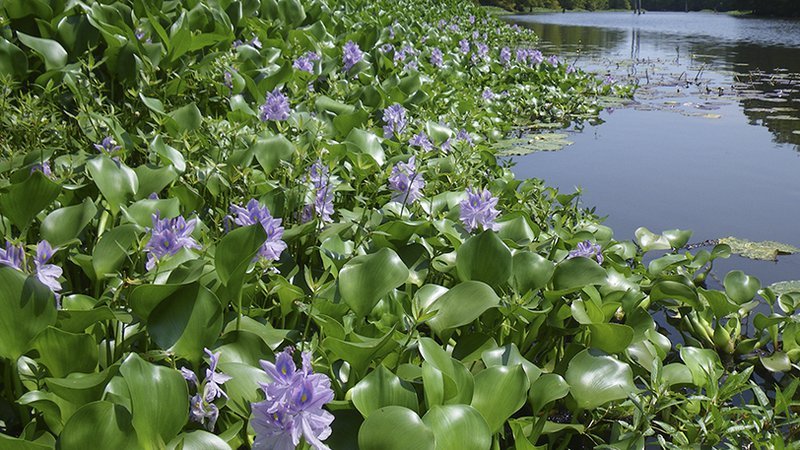 Arkansas Game and Fish Commission bioligists since 2005 have battled water hyacinth, an invasive plant that overruns everything in its path, at Lake Wallace in Dermott.

DERMOTT — Arkansas Game and Fish Commission biologists are battling a beast of a problem at Lake Wallace in Drew County, and it’s a fight that’s raged since 2005. That’s when water hyacinth, an invasive plant that overruns everything in its path, was first discovered in the southeast Arkansas lake.

According to Kris Nault, fisheries supervisor for the AGFC in Monticello, either AGFC staff or herbicide contractors have treated the lake for the last 14 years and likely will continue fighting this problematic plant for the foreseeable future.

“Water hyacinth likely will never be eradicated from Lake Wallace, as the lake has an established seed base of the plant,” Nault said. “But by keeping up with treating it and some help from Mother Nature in the form of some cold winter days to knock it back, we can keep it at a reasonable level where anglers and boaters can still enjoy the lake.”

So what’s the problem with this pesky plant? It gives new meaning to the term, “growth spurt.”

“The growth rate of water hyacinth is among the highest of any known plant,” Nault said. “In ideal conditions, water hyacinth populations can double in size every two weeks. At that rate, it doesn’t take long to become an issue with angling access, boating access and the lake itself.”

According to the University of Florida’s Center for Aquatic and Invasive Plants, a healthy acre of water hyacinth can weigh more than 200 tons. Mats of the plant form an impassable barrier to boating and angling traffic. All of that vegetation also sucks the oxygen out of the water and shades out all sunlight, smothering all aquatic life underneath.

“Decomposing water hyacinth mats can also lead to muck accumulation on the bottom,” Nault said. “That can make lakes shallower over time and change the entire system.”

A History with Hippos?

Water hyacinth is nothing new. People have been fighting the noxious aquatic plant since it first arrived in the United States at the 1884 World’s Industrial and Cotton Centennial Exposition in New Orleans. Although native to South America, it was visiting groups from Japan who brought these plants and gave them away. The beautiful flowers were a hit with many people, and by the turn of that century, it had spread throughout the Southeast. By 1904, people had spread the noxious weed as far as California.

One of the most radical ideas to control water haycinth’s spread came in 1910 when Congressman Robert Broussard of Louisiana introduced H.R. 23261, which asked for $250,000 to import hippopotamuses that would eat the hyacinth and produce a supply of meat for Americans. Thankfully, the idea of importing the non-native hippos failed, and “lake steaks” from Louisiana hippo ranches are only fantasy.

The most common tool biologists use to control the spread of water hyacinth is herbicide. Biologists will spray plants on the surface with glyphosate, which is low in toxicity to fish and wildlife. Even with today’s herbicides, hyacinth can be difficult to combat. Large mats of the plant are composed of many layers. The top layer may shield leaves and stems of other plants underneath, requiring multiple treatments to reach all of the plants in the mat.

“The herbicide must be absorbed into the plant’s tissue, then it will kill the entire plant,” Nault said. “The process often takes up to two weeks.”

The current process is effective at controlling the hyacinth at Wallace, but will be a constant battle. This spring, biologists mapped out the area the plant covered. About 18 percent of the surface of the lake was infested with bright green mats dotted with purple flowers.The lake has been treated several times since that point, and hyacinth coverage has been reduced to about 5 percent of the lake’s surface.

“Boating the lake is much easier now,” Nault said. “Areas that were impassable due to rafts of water hyacinth mats are now clear enough to move around.”

According to Jimmy Barnett, coordinator for the AGFC’s Aquatic Nuisance Species Program, the best method to battle problem plants like water hyacinth is to prevent them from ever reaching other bodies of water.

A major source of these plants being spread to new areas is from boaters and anglers unintentionally transporting bits of the plant or its seeds on their boats and equipment.

“Clean any bits of vegetation and mud you find on your boat and trailer before leaving the lake. Drain all the water from the boat’s bilge area and livewells. Let everything dry out at least five days before visiting a new body of water. If you can’t wait that long, rinse the boat and trailer thoroughly with a high pressure washer or hot water that’s at least 120 degrees to help remove any invasive organisms.”

Visit www.cleandraindry.org and www.anstaskforce.gov for more information on aquatic nuisance species and how to keep invasive species, and hippopotamus ranches, out of Arkansas.