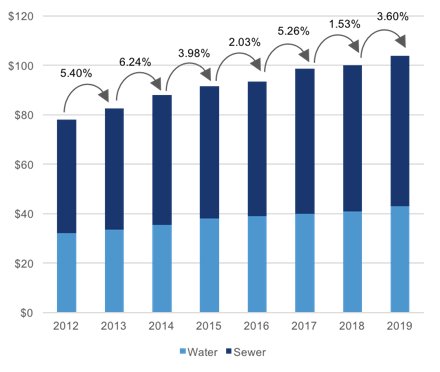 The above graph provided by Bluefield Research shows a steady increase in water and wastewater rates for 50 U.S. cities. In those areas, water and sewer bills combined in 2012 averaged around $80, in 2019 they average over $100.

Bluefield’s annual analysis of utility water and wastewater rates demonstrates the extreme differences across the U.S., including rate structures and service fees. Of the top 50 U.S. metropolitan areas analyzed by Bluefield, 35 demonstrated increased rates from 2018 to 2019, while another 15 decreased or kept their rates constant during the same period.

“While water rates are rising overall, the year-to-year rate volatility and varied approaches by utilities is striking,” says Erin Bonney Casey, Research Director at Bluefield. “Given the escalating annual capital and operating expenditures currently exceeding US$110 billion nationwide, and the fact that rates represent a critical source of water infrastructure funding, one would expect to see more consistency, nationally and locally, over time.”

The volatility is evidenced nationally over the last eight years with annual average rate swinging from a 6% high in 2014 to a 1.5% low in 2018. This past year, the biggest changes occurred in El Paso, Texas and Riverside California, where average customer bills increased 33.3% and declined negative 22.0%, respectively.

There is also a wide discrepancy in the resulting customer bills based on estimated household water usage, which varies across regions. In 2018, combined water & wastewater bills ranged from a low of $30.16 in Memphis, Tennessee to a high of $226.62 in Seattle, Washington. The average combined bill for all cities analyzed topped $96.35.

To account for declines in revenues, utility rate structures have relied more heavily on fixed rate structures. As an example, since 2012, fixed wastewater rates have increased by 60.9%, while variable rates have risen only 39.1%. The impact is that low volume users, often the lowest income households, are most affected by rate increases.