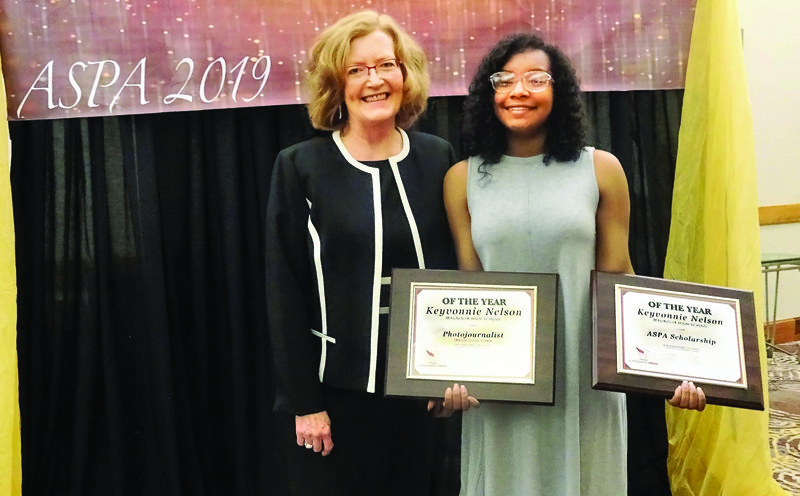 At the annual meeting of the Arkansas Scholastic Press Association April 18-19, Magnolia High student Keyvonnie Nelson was named Photojournalist of the Year and won the organization’s $500 scholarship. Nelson plans to attend University of Central Arkansas in the fall to study journalism. Congratulating her is Connie Hinton, yearbook adviser.

In addition, the 2019 edition of the yearbook earned five awards for being Best of ASPA, a category in which the judges choose the best entry in the state from those that earned superior ratings.

In the highly competitive category of yearbook sports photo, a basketball photo taken by Nelson of Kadyn Roach shooting won Best of ASPA.

This year’s yearbook has HOME on the cover with Magnolia blossoms. The theme was carried through the book by a picture on the inside front cover of students having iced tea, strawberries, and watermelon sitting on Belva Smith and Jane Waldo’s porch across from Wilson Gardens.

Another theme photo on page one has students under a Magnolia flag with the courthouse in the background.

Those four students – Nelson, Babbitt, Franks, and McWilliams — were also named ASPA scholars and presented cords at the convention banquet for two years’ service to MHS journalism and a high GPA. The cords will be worn at graduation.

In addition, a two-page pep rally spread by Franks won best of ASPA in yearbook student life layout, and in the category of yearbook advertising, senior ads designed by Nelson, Babbitt, and Grace Gore were named Best of ASPA.

To be named Photojournalist of the Year, Nelson submitted five photos and an essay. She plans to attend University of Central Arkansas in the fall to major in journalism.

Another Magnolia student, Sarah Guevara, won the scholarship three years ago and will be interning with CNN this summer.

Three other excellent ratings went to Nelson for a student life photo taken at the homecoming bonfire, an academic photo taken of a welder, and a groups photo of the band performing in the rain.

Koesha Davis earned two excellent ratings for her sports stories on the switch from 5A to 4A classification and on the afternoon school got out to watch Magnolia play basketball in the state tournament in Panther Arena.

Babbitt’s story on the parking crunch resulting from the construction at the high school also earned an excellent rating.

The MHS yearbook and newspaper adviser is Connie Hinton.