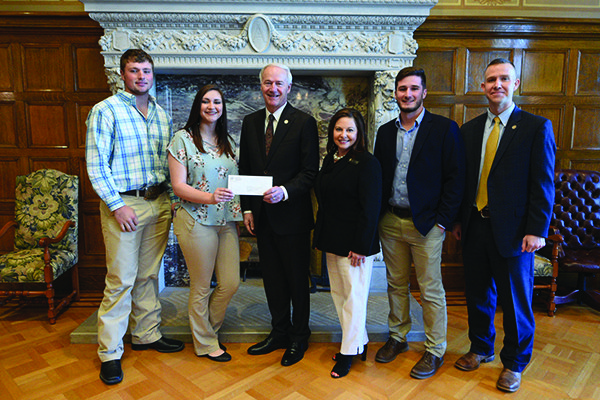 Kory Callaway, of Magnolia, Arkansas, Strand Barricklow, of Lebanon, Indiana, and Tina Padgett, of Damascus, Arkansas, were awarded the scholarships on Monday, April 15, 2019. Callaway and Barricklow are Agriculture Business majors and Padgett is an Agriculture Education major. They were presented the awards at the state capital in Little Rock by Governor Asa Hutchinson, Agriculture Secretary Wes Ward and Plant Board Director Butch Calhoun.

“Farmers provide so many things that are essential to life,” Hutchinson said to the recipients. “I am pleased you have chosen to follow thousands before you who have learned the best methods to produce the highest yields. In choosing a career in agriculture, which is our state’s largest industry, you have chosen a rewarding path.”

The AAD is dedicated to the development and implementation of policies and programs for Arkansas agriculture and forestry to keep its farmers and ranchers competitive in national and international markets while ensuring safe food, fiber, and forest products for the citizens of the state and nation.