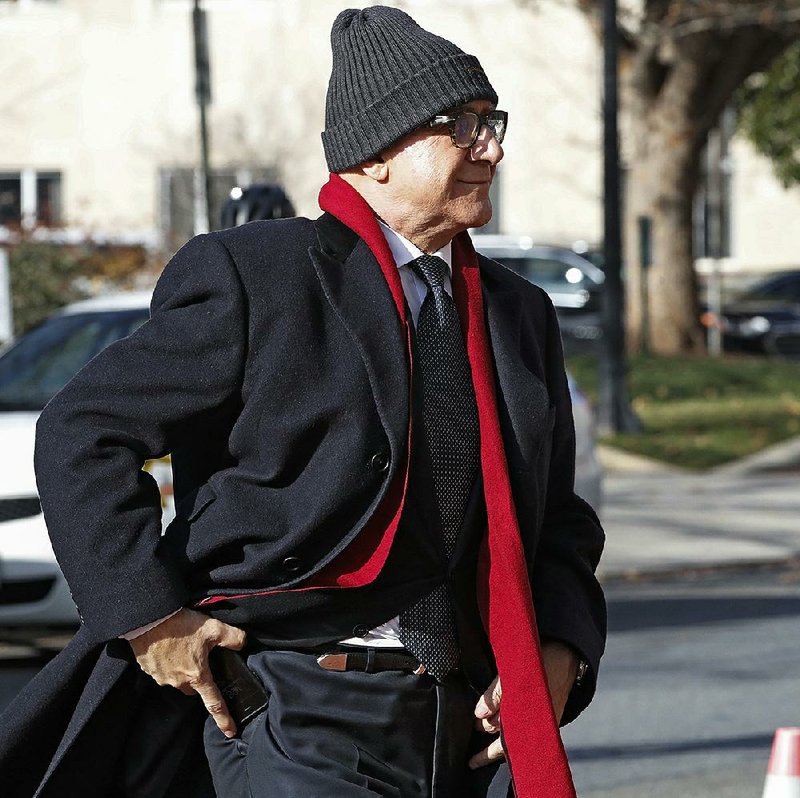 Bijan Kian and Ekim Alptekin were accused in an indictment of conspiring to "covertly and unlawfully" influence U.S. public opinion and politicians, all while concealing that the Turkish government was directing their work. The campaign came during the final months of the 2016 presidential campaign while Flynn was a top surrogate for Trump.

Flynn's firm -- the now-defunct Flynn Intel Group -- received a total of $530,000 for its work. The indictment said high-level Turkish officials approved the budget for the project and were given regular updates by Alptekin about the progress of the campaign against cleric Fethullah Gulen, a former ally of Turkish President Recep Tayyip Erdogan who has since become a rival.

"The defendants sought to discredit and delegitimize the Turkish citizen in the eyes of politicians and the public," the indictment said.

Kian is the co-founder of the Flynn Intel Group. Alptekin, a businessman who holds dual Turkish-Dutch citizenship, is close to Erdogan and helped finance the project.

The indictment said that as part of the scheme, Alptekin used his company -- a Dutch firm called Inovo BV -- to conceal that Turkey's government was behind the payments.

Alptekin, who was also charged with making false statements to FBI investigators, faces up to 35 years in prison. His current location is unknown, though he is believed to be in Turkey. Through a spokesman, he denied the charges, claiming that he never lied to the FBI and that Turkey did not participate in the project.

Kian -- who also goes by Rafiekian -- stood silently in court in Alexandria on Monday as the charges were announced. He was released after the hearing, and his lawyer declined to comment. Prosecutors said he faces up to 15 years in prison.

The indictment is seen as further evidence of a broad crackdown on unregistered foreign lobbying growing from the inquiry by Robert Mueller, the special counsel who has investigated foreign flows of money from Ukraine, Turkey and other countries devised to manipulate decision-making in Washington. Mueller referred the Turkey case back to prosecutors in northern Virginia.

Flynn, a retired general, is scheduled to be sentenced today in federal court in Washington on charges of lying to investigators about his conversation with the Russian ambassador during the transition after the 2016 election.

The FBI released a document late Monday providing new details about how Flynn lied about the conversation. Flynn had asked that Russia not escalate tensions after President Barack Obama's administration imposed sanctions against Russia for its interference in the 2016 presidential race. He had also asked Russia to either delay or oppose a United Nations resolution to condemn Israeli settlements in the West Bank.

But in their account of their interview, the agents stated that Flynn said he had merely inquired about Russia's views on the resolution and not advocated that Russia take any particular position. He said he only communicated with Kislyak because "maintaining trusted relationships within foreign governments is important," the agents stated.

Flynn left the White House in February 2017 after the conversation was revealed. But Flynn had also informed the incoming White House legal counsel during the transition that he might need to register as a foreign agent, and that apparently raised no concern -- even though he would soon become Trump's national security adviser.

When he pleaded guilty last December to lying to FBI agents working on the Russia investigation, Flynn also admitted to prosecutors that he had repeatedly violated laws requiring firms to register their work on behalf of foreign clients.

This month, Mueller's prosecutors issued a sentencing memorandum saying that Flynn had provided "substantial help" in several unspecified but continuing investigations. It is believed that the Turkey inquiry is one of these investigations.

The indictment Monday spells out for the first time how intimately Flynn was involved in the lobbying effort, which involved weekly conference calls to coordinate with Turkish officials.

Prosecutors cited Flynn's assistance as grounds for leniency in his sentencing.

The investigation into Turkish lobbying began in 2016 after Flynn, who was advising Trump's political campaign, wrote an op-ed for The Hill newspaper ahead of the presidential election calling Gulen a "radical Islamist" and a "shady Islamic mullah" who was "running a scam."

Gulen has lived in Pennsylvania for two decades. The Turkish government has accused him of helping to plot and instigate a failed attempt to overthrow Erdogan in July 2016. Gulen has denied any role in the attempted coup and has condemned it.

According to the indictment, Turkey's government asked the United States shortly after the coup attempt to arrest and extradite Gulen. The Justice Department rejected Turkey's request, the indictment said, because it had not met "the legal standards for extradition."

The secret lobbying effort -- called the "Truth Campaign" and later "Operation Confidence" by those involved -- appears to have begun shortly afterward. Prosecutors said that on July 29, 2016, Alptekin sent an email to Kian saying that he had met with a Turkish government minister who was interested in exploring a lobbying campaign against Gulen.

In another email to Kian and Flynn, Alptekin said he had several meetings with a pair of Turkish ministers in Ankara.

"I have a green light to discuss confidentiality, budget, and the scope of the contract," the email said, according to the indictment.

On Sept. 19, 2016, the three men met in New York with a pair of Turkish ministers. The indictment says the Flynn Intel Group falsely claimed the meeting was just for background on Turkey, when it was actually to discuss the lobbying campaign against Gulen.

As part of their efforts, Flynn and Kian commissioned a lengthy dossier titled "Fethullah Gulen: A Primer for Investigators," which was written by Thomas Neer, a former FBI agent.

But days before the November 2016 election, Alptekin complained to Kian that the Flynn Group had not "publicized enough negative information" about Gulen to honor the contract.

Kian, according to prosecutors, then produced to Alptekin a draft of the op-ed, which argued the U.S. should not provide a "safe haven" for the cleric.

"The arrow has left the bow!" Kian emailed Alptekin on Nov. 4, 2016. "This is a very high profile exposure one day before the election."

Alptekin responded that Kian's op-ed was "right on target."

The op-ed, titled "Our Ally Turkey Is in Crisis and Needs Our Support," was published in The Hill on Nov. 8, the day Trump was elected. It compared Gulen to Iran's Ayatollah Ruhollah Khomeini.

"We all remember another quiet, bearded elder cleric who sat under an apple tree ... in the suburbs of Paris in 1978," Flynn wrote in the op-ed. "He claimed to be a man of God who wanted to be a dictator."

The indictment notes that the op-ed uses identical or very similar language to that prepared by Kian in the draft.

At the Justice Department's national security division, officials wondered why Flynn, aspiring to be national security adviser to the next president, was publishing an op-ed using the talking points of the Turkish government.

In 2017, after the lobbying effort was exposed, Flynn and Kian filed additional disclosures acknowledging that the Gulen project "could be construed to have principally benefited the Republic of Turkey." They detailed payments to other people and firms associated with the Gulen project.

The FBI accused Alptekin of lying to agents repeatedly during an interview on May 24, 2017. Prosecutors said Alptekin falsely said that Turkey had abandoned the project and that he had decided to retain Flynn's company himself.

Prosecutors said Alptekin and Kian falsely claimed that Flynn wrote the op-ed on his own and that Alptekin opposed its publication.